This new pill could make it easier for people to stick to the treatment. 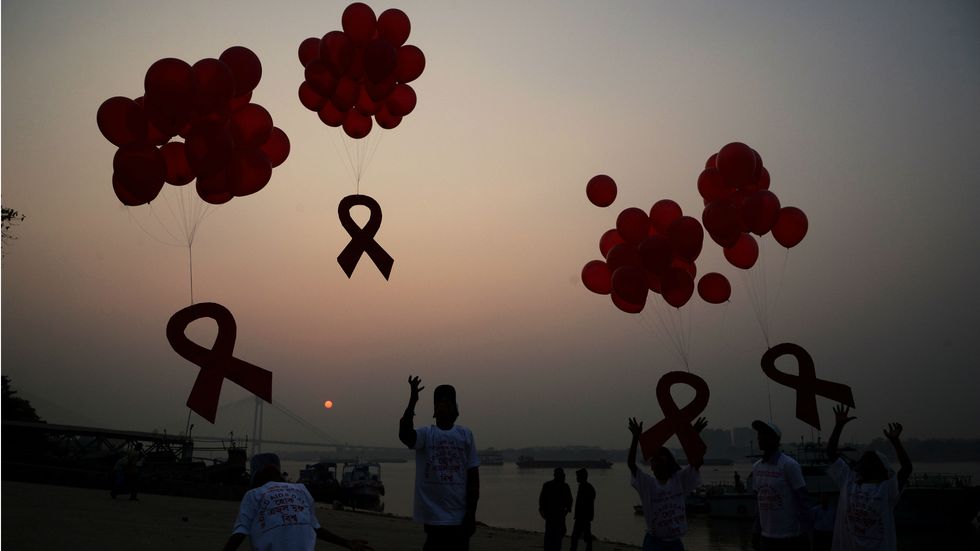 Replacing daily pills with a weekly regimen could help patients stick to their dosing schedule.

Researchers at MIT and Brigham and Women’s Hospital have developed a capsule that can deliver a week’s worth of HIV drugs in a single dose. This advance could make it much easier for patients to adhere to the strict schedule of dosing required for the drug cocktails used to fight the virus, the researchers say.

The new capsule is designed so that patients can take it just once a week, and the drug will release gradually throughout the week. This type of delivery system could not only improve patients’ adherence to their treatment schedule but also be used by people at risk of HIV exposure to help prevent them from becoming infected, the researchers say.

“One of the main barriers to treating and preventing HIV is adherence,” says Giovanni Traverso, a research affiliate at MIT’s Koch Institute for Integrative Cancer Research and a gastroenterologist and biomedical engineer at Brigham and Women’s Hospital. “The ability to make doses less frequent stands to improve adherence and make a significant impact at the patient level.”

Traverso and Robert Langer, the David H. Koch Institute Professor at MIT, are the senior authors of the study, which appears in the Jan. 9 issue of Nature Communications. MIT postdoc Ameya Kirtane and visiting scholar Omar Abouzid are the lead authors of the paper.

Scientists from Lyndra, a company that was launched to develop this technology, also contributed to the study. Lyndra is now working toward performing a clinical trial using this delivery system.

“We are all very excited about how this new drug-delivery system can potentially help patients with HIV/AIDS, as well as many other diseases,” Langer says.

“A pillbox in a capsule”

Although the overall mortality rate of HIV has dropped significantly since the introduction of antiretroviral therapies in the 1990s, there were 2.1 million new HIV infections and 1.2 million HIV-related deaths in 2015.

Several large clinical trials have evaluated whether antiretroviral drugs can prevent HIV infection in healthy populations. These trials have had mixed success, and one major obstacle to preventative treatment is the difficulty in getting people to take the necessary pills every day.

Alba Cerrato displays her cocktail of 14 different AIDS medications that she takes three times a day July 11, 2002 in Miami, Florida. Cerrato contracted the disease in 1994 from her boyfriend who passed away in 1999.

The MIT/BWH team believed that a drug delivery capsule they developed in 2016 might help to address this problem. Their capsule consists of a star-shaped structure with six arms that can be loaded with drugs, folded inward, and encased in a smooth coating. After the capsule is swallowed, the arms unfold and gradually release their cargo.

In a previous study, the researchers found that these capsules could remain in the stomach for up to two weeks, gradually releasing the malaria drug ivermectin. The researchers then set out to adapt the capsule to deliver HIV drugs.

In their original version, the entire star shape was made from one polymer that both provides structural support and carries the drug payload. This made it more difficult to design new capsules that would release drugs at varying rates, because any changes to the polymer composition might disrupt the capsule’s structural integrity.

To overcome that, the researchers designed a new version in which the backbone of the star structure is still a strong polymer, but each of the six arms can be filled with a different drug-loaded polymer. This makes it easier to design a capsule that releases drugs at different rates.

“In a way, it’s like putting a pillbox in a capsule. Now you have chambers for every day of the week on a single capsule,” Traverso says.

Tests in pigs showed that the capsules were able to successfully lodge in the stomach and release three different HIV drugs over one week. The capsules are designed so that after all of the drug is released, the capsules disintegrate into smaller components that can pass through the digestive tract.

Daniel Kuritzkes, a professor of medicine at Harvard Medical School and the chief of infectious diseases at Brigham and Women’s Hospital, says that with further safety studies and tests of different drug combinations, this approach could provide another tool to help doctors treat HIV infections and prevent new ones.

“It’s a very interesting approach and certainly something that’s worth further development, and potentially human trials to see how workable this is,” says Kuritzkes, who was not involved in the research.

Working with the Institute for Disease Modeling in Bellevue, Washington, the researchers tried to predict how much impact a weekly drug could have on preventing HIV infections. They calculated that going from a daily dose to a weekly dose could improve the efficacy of HIV preventative treatment by approximately 20 percent. When this figure was incorporated into a computer model of HIV transmission in South Africa, the model showed that 200,000 to 800,000 new infections could be prevented over the next 20 years.

“A longer-acting, less invasive oral formulation could be one important part of our future arsenal to stop the HIV/AIDS pandemic,” says Anthony Fauci, director of the National Institute of Allergy and Infectious Disease, which partly funded the research.

“Substantial progress has been made to advance antiretroviral therapies, enabling a person living with HIV to achieve a nearly normal lifespan and reducing the risk of acquiring HIV. However, lack of adherence to once-daily therapeutics for infected individuals and pre-exposure prophylaxis (PrEP) for uninfected at-risk people remain a key challenge. New and improved tools for HIV treatment and prevention, along with wider implementation of novel and existing approaches, are needed to end the HIV pandemic as we know it. Studies such as this help us move closer to achieving this goal,” Fauci says.

The MIT/BWH team is now working on adapting this technology to other diseases that could benefit from weekly drug dosing. Because of the way that the researchers designed the polymer arms of the capsule, it is fairly easy to swap different drugs in and out, they say.

“To put other drugs onto the system is significantly easier because the core system remains the same,” Kirtane says. “All we need to do is change how slowly or how quickly it will be released.”

The researchers are also working on capsules that could stay in the body for much longer periods of time.