Socrates is one of the most famous philosophers of all time. His name is well known even to people with no interest in his work. The details of his life, along with some of his quotes and stances, have long left the ivory towers many philosophers hide in and entered the popular consciousness.

However, there is one detail about Socrates that many people don’t know.

Socrates, like many great ancient thinkers, never wrote anything down because he found writing to be inferior to dialogue as a method of inquiry. Everything we know about what he said, did, or thought comes to us from others. However, they don’t agree on what he did or said.

What do our sources say?

The earliest source that mentions Socrates is a play. Aristophanes’ comedy The Clouds was written in 423 BCE when Socrates would have been 47. In it, Socrates is depicted as an eccentric intellectual who is continuously trying to get out of paying his bills. He runs a small school dedicated to science and makes money training young people to torment their parents and beat debt collectors with rhetoric.

These were the two charges that got him sentenced to death and Socrates remarked on that depiction of him as being both popular and false in Plato’s record of the trial.

After that we have Xenophon. He was a solder-historian of some note. He knew Socrates in life, both as his student and as a fellow soldier in the Athenian army. His Socratic dialogues, however, leave much to be desired. He wasn’t in attendance for Socrates’ trial, which he wrote on anyway, and was a child during the events of the other stories he relates to us in suspiciously high detail.

He offers us a version of The Apology that differs from Plato’s. Most notably, while Plato suggests that Socrates was alright with the possibility of being put to death because of his commitment to the pursuit of knowledge, Xenophon records that Socrates said he was getting old and would rather die before he went senile.

Most of what we know about Socrates comes from his student Plato, who wrote many dialogues featuring his teacher. His Socrates is the basis for most of our idea of him. He is often treated as the “real” Socrates despite problems with that notion.

Plato’s Socrates changes his viewpoints over time. While his early Socrates professes to know nothing about death and makes few claims on morality the later dialogues have Socrates knowing about the immortality of the soul and making strong claims on moral issues he had previously claimed ignorance on. An impressive feat for a man who had been dead for years when the dialogues were written.

That Socrates is also a little too perfect to be real; he was an excellent soldier, could drink everyone else under the table while debating, could devise the ideal state over dinner, and was so virtuous that he would rather die than sell out. It should also be remembered that Plato and Xenophon were forty years younger than Socrates and only knew him for the latter part of his life. Their depictions of the earlier parts of his life must be taken with skepticism. 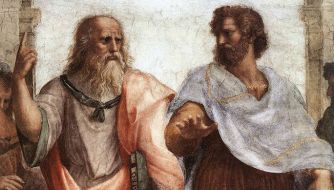 Plato (left) and Aristotle (right), as depicted by Raphael in his painting The School of Athens.

So, how do we solve the problem?

In many ways, the problem is unsolvable. We are unlikely to find any new sources on his life anytime soon and the sources we use now have been scoured over for centuries in hopes of finding a solution. This still hasn’t deterred historians and philosophers from trying to solve it.

There have been four primary approaches to the mystery; each one has its issues.

1. The “real” Socrates is the person that Plato, Xenophon, and Aristophanes all agree on.

Issue: they don’t agree on much at all. All we would be able to say is that Socrates was an ugly Athenian man who was also very bright and inquisitive.

2. Socrates is the person who “knows that he knows nothing” and always tries to learn more by inquiry while professing his ignorance. The man who seeks to know rather than teaches.

Issue: While many dialogues have Socrates focus on learning rather than teaching, even in those dialogues he made a few claims which can be understood as taking a firm stance. Cutting those out, we are again left with very little to work with. Even worse, this rules out some of the dialogues which are the most plausibly true.

3. The real Socrates is the Socrates described in the earliest dialogues by his student Plato.

Issue: We aren’t completely sure on when each dialogue was written. While some of them were apparently written before others as they reference recorded events, others are dated with much less certainty. This remains the most commonly cited “real” Socrates.

4. Socrates was the person who moved Greek philosophy’s focus from the nature of reality to ethicsand had no theory of the forms.

Issue: Some of the Socratic dialogues which center on ethics still either discuss metaphysics or imply the existence of the forms that Plato would later elaborate on; again leaving us with too little to work with.

The mystery of who Socrates truly was may prove impossible to solve short of us finding a massive archeological site filled with copies of his autobiography. Since he didn’t write one, all we have to go on are the writings of others. Despite this, his influence on western civilization has been tremendous. We are all heirs to the intellectual tradition he helped to forge and have benefited from his work. What that work was, exactly, we may never know.

But at least we know how little we know, which was (probably) all he wanted in the first place.

Related
High Culture
Did Paul Cézanne hide an early self-portrait underneath a 160-year-old still life?
To answer that question, we may have to figure out when the famed painter started to go bald.
Strange Maps
Dutch government releases a genuine treasure map from WWII, sparking a hunt for the loot
X marks the spot. The Dutch town of Ommeren has been swamped by detectorists armed with shovels looking for $20-million treasure.
If money doesn’t buy happiness, you’re spending it wrong
These money experts say you can buy happiness. There are some red flags to look out for, though.
▸
7 min
—
with
Lindsay Bryan-Podvin
Thinking
Creative wisdom from Rick Rubin: embrace your inner gatekeeper
Unlock the full potential of your creativity with “holistic detachment.” This is the way of the editor.
Starts With A Bang
The path forward for astronomers and native Hawaiians
A history of injustice and the greatest natural location for ground-based telescopes have long been at odds. Here’s how the healing begins.
Up Next
5 Questions to Ask Yourself When Developing a Professional Learning Program
Having a strong professional learning program is a growing area of importance in organizations around the country. In a LinkedIn survey of more than 500 North American learning and development […]