With medical and recreational marijuana gaining legality across the U.S. and in other countries, health experts are scrambling to find out what effect the substance actually has on human health, particularly the brain. Previous research has been mixed. Several studies support the claim that chronic use, starting in the teen years, can increase the risk of a psychotic episode later in life.

Most of these studies, however, find that participants who do have a psychotic breakdown after chronic, long-term use, were probably barreling toward such an episode anyway. Marijuana merely acted as a catalyst. Another important point: few studies look at occasional use, only chronic use, such as smoking pot daily or even multiple times per day.

So adolescence and teens should be made to steer clear of the stuff, but what about those of us with fully formed frontal lobes? And how does it measure up against, say, how alcohol affects the brain? Researchers at the University of Colorado-Boulder conducted a meta-analysis to find out. Their findings were published recently in the journal Addiction.

The two main types of tissue that make up the brain are gray and white matter. Gray matter contains cell bodies, dendrites, and axons. Whereas white matter is made up of the nerve fibers that control communications between brain clusters and all the other parts of the body. 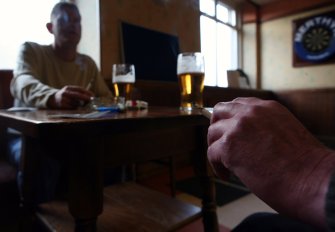 Chronic alcohol consumption causes a loss of volume in the gray matter. Would marijuana do the same? Credit: Getty Images.

Study co-author Kent Hutchison is a professor of behavioral neuroscience at CU. Although previous research found diminished volume in certain areas of the brain from chronic marijuana use, those studies are inconsistent. Hutchison said in a press release, “When you look at these studies going back years, you see that one study will report that marijuana use is related to a reduction in the volume of the hippocampus. The next study then comes around, and they say that marijuana use is related to changes in the cerebellum or the whatever.” He added: “The point is that there’s no consistency across all of these studies in terms of the actual brain structures.”

So Hutchison and colleagues went back through the literature, examining all the MRI data concerning marijuana or alcohol consumption that had been collected over the years, paying particular attention to white and gray matter. The result? Cannabinoids—chemical compounds found only in marijuana, have no long-term impact on gray or white matter, a finding which contradicts years’ worth of previous studies.

In contrast, consistent alcohol use causes a significant decrease in gray matter volume. It also threatens the integrity of white matter. Those adults who have been drinking excessively for decades suffer the most damage, researchers say. According to Hutchison, “while marijuana may also have some negative consequences, it definitely is nowhere near the negative consequences of alcohol.”

Hutchison says they were able to statistically control for those who consumed alcohol versus cannabis. Still, the study wasn’t without shortcomings. For instance, researchers only looked at marijuana use within the last 30 days. And in most cases, it was low-level use. What’s more, there could have also been subtle changes that weren’t picked up by the MRIs. While some previous animal studies have shown that marijuana has neuroprotective properties, studies in humans have been contradictory. 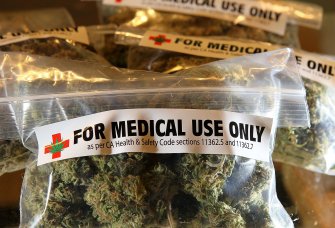 Would proving it’s not so bad for you clear the way for medical marijuana? Credit: Getty Images.

A large 2015 study using twins, concluded that brain differences between the two siblings existed way before marijuana use came into the picture and that it may be these brain differences that caused one twin to chronically use cannabis. This most recent study falls into line with a growing body of evidence that marijuana use, particularly occasional use as an adult, isn’t all that bad for you. The scientists do warn however that, although it may not be quite as damaging as other substances, that’s far from proving cannabis has medical benefits.

According to graduate student Rachel Thayer, lead author on the study: “Particularly with marijuana use, there is still so much that we don’t know about how it impacts the brain.” Far more research will have to be done to determine whether cannabis is helpful, harmful, or neutral when it comes to brain health. Hutchison, Thayer, and colleagues say that not only do we need more studies on the health effects of cannabinoids, we need more consistent ones as well.

To learn more about the debate on alcohol vs. marijuana, click here.

Related
13.8
The weirdness of quantum mechanics forces scientists to confront philosophy
Though quantum mechanics is an incredibly successful theory, nobody knows what it means. Scientists now must confront its philosophical implications.
Neuropsych
Why is a Starbucks loyalty rewards program making customers so angry?
The rewards price to get a free cup of hot coffee at Starbucks is going up.
Empowering growth
7 essential management training topics for every team leader
From emotional intelligence to problem solving, these management training topics will set team leaders up for success.
Thinking
What if you could rewire your brain to conquer suffering? Buddhism says you can
For Buddhists, the “Four Noble Truths” offer a path to lasting happiness.
Hard Science
Solved: 500-year-old mystery about bubbles that puzzled Leonardo da Vinci
The solution involves the infamous Navier-Stokes equations, which are so difficult, there is a $1-million prize for solving them.
Up Next
Neuropsych
Can you really pick up on good and bad ‘vibes’? Yes, suggests new research.
A newly discovered phenomenon shows that humans communicate outside of mere auditory and visual modes.