While confirming what many would consider obvious to anyone who knows a teenager, a new study provides some fascinating details on how teens use social media.

About 92% of all teens go online daily, with 71% of them using Facebook and 52% getting on Instagram. The average amount of time the teens spend on these online activities ranges from two to five hours per day. The recent study from the University of California, Irvine (UCI) tells us that when they are online, teens are concerned with how they present themselves.

Teens make a real effort to create a favorable internet presence by thinking about how they select the photos, activities, and links that they post on Facebook and Instagram. They want to share content that makes them seem interesting and liked by others. Being attractive to their peers is the main consideration in how young adults makes online decisions. 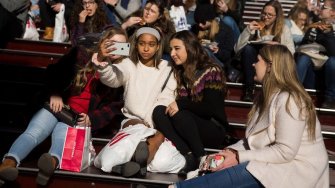 A group of teens takes a photograph with a smartphone in Times Square, December 1, 2017, in New York City. (Photo by Drew Angerer/Getty Images)

The lead author Joanna Yau, a UCI Ph.D. candidate in education, stressed how deliberate the teens are in their posting habits:

“Teenagers aren’t just posting carelessly; they’re surprisingly thoughtful about what they choose to reveal on social media,” said Yau. “Peer approval is important during adolescence, especially in early adolescence, so they’re sharing content that they think others will find impressive.”

Facebook and Instagram give teens an opportunity to connect with friends but also with people they may not be all that close to, like classmates. Unlike other real-life situations, posting on social media allows you time to select and edit what you will be posting, giving teens the opportunity to carefully consider what image they will be presenting to the world. They spent the effort on picking just the right angle, filter and caption.

For girls, the researchers found, putting together favorable images might involve a prolonged deliberation and getting advice from close friends. Unlike boys, girls also tend to get their friends to comment on and like their posts in order to boost their popularity. They may also be more aware of when the peak social media traffic hours are when likes can be maximized.

“We found that some teens invested great effort into sharing content on Facebook and Instagram and that what may seem to be an enjoyable activity may actually feel tedious,” Yau explained. “Their social rules for online interaction require a higher level of sensitivity than do those for in-person communication. Even interesting and positive posts can be interpreted negatively. For example, sharing about college admissions could come across as pretentious and prideful.”

Related
The Present
Radical idea: Redraw the U.S. map as a nation of city-states
While cities drive national economic growth, their political geography means they cannot effectively deal with inequality, poverty, and other socioeconomic problems.
The Learning Curve
Why do high IQ people stagnate in their careers? Emotional intelligence
Research suggests that emotional intelligence is more vital for success than IQ.
The Present
Even in the age of AI, some problems are just too difficult for computers
Computers are growing more powerful and more capable, but everything has limits
The Future
How the metaverse will revolutionize K-12 and higher education
Imagine going on a tour through the human circulatory system as a tiny cell. That is just one example of education in the metaverse.
Starts With A Bang
Ask Ethan: What are white holes, and do they really exist?
In General Relativity, white holes are just as mathematically plausible as black holes. Black holes are real; what about white holes?
Up Next
Starts With A Bang
Pluto’s Surface Changes Faster Than Earth’s, And A Subsurface Ocean Is Driving It
A single, complete view of half the world was enough to teach us how these distant, frozen bodies work.On July 14, 2015, NASA’s New Horizons flew by Pluto.Pluto’s atmosphere, as imaged […]