A new study echoes a key finding in a growing body of research on self-estimated intelligence: men tend to overestimate how smart they are.

In an paper published in the journal Advances in Physiology Education, researchers explore how students in a biology course at Arizona State University rated their own intelligence relative to the class and to individual classmates.

But the numbers told a different story when students compared themselves with individuals: The average male student had a 61 percent chance of thinking he was smarter than a classmate, while the average female only had a 33 percent chance—meaning many women in the class significantly underestimated their own intelligence. 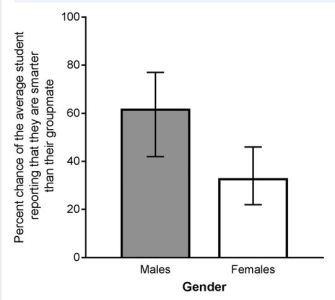 Interestingly, the results also showed that native English speakers—male and female—were more likely to have a higher academic self-concept, or “one’s perception of his or her ability in an academic domain,” than their second-language counterparts.

Also, the researchers suggested that students with higher academic self-concept will participate more in class, leading them to learn more because they’re “constructing their own knowledge rather than listening passively.” The disparities in academic self-concept along gender lines might explain, in part, why women are underrepresented in STEM fields.

“Females are not participating as much in science class,” study co-author Sara Brownell told NBC News. “They are not raising their hands and answering questions.”

The personality types of men in STEM fields might also partly explain why women have a harder time fitting in.

“Boys who are drawn to STEM fields often are not the humanities-focused, artistic boys who might have a higher social IQ,” Ilana Seidel Horn, a professor of mathematics education at Vanderbilt University, told NBC News. “Often you have a concentration of socially awkward people who do socially inept things.”

Brownell suggested teachers and professors could be more mindful about who’s participating in class and who’s not.

“We encourage them to be explicit about the importance of hearing from every student,” she said. “Even the quietest students can have the best ideas.”

Related
L&D strategy
Best practices for a needs analysis [Templates included]
Conducting a thorough needs analysis requires care, curiosity, and open-mindedness.
Neuropsych
Memory and the benefits of forgetting
Forgetfulness isn’t always a “glitch” in our memories; it can be a tool to help us make sense of the present and plan for the future.
The Learning Curve
5 Stoic quotes to help you through difficult times
“We suffer more often in the imagination than in reality.”
Starts With A Bang
The good reasons scientists are so hostile to new ideas
Many people out there, including scientists, claim to have discovered a series of game-changing revolutions. Here’s why we don’t buy it.
The Present
Climate change is altering the chemistry of wine
Smoke taint from wildfires is gross, even to wine amateurs.
Up Next
Mind & Brain
Belief in supernatural beings is totally natural – and false
Why are we so drawn to supernatural beliefs?