As we reported previously, scientists from the University of New Mexico have been studying how access to marijuana may help alleviate the opioid crisis, declared a national emergency by President Trump. Their study has now been published in the journal PLOS One, with the researchers concluding that there is “clinically and statistically significant evidence” that increased cannabis use led to patients cutting down on opioids and improved their quality of life.

The study analyzed the health data of 66 patients who were using opioids habitually to manage their severe chronic pain. 37 of the patients were enrolled in a medical marijuana program between 2010 and 2015 while 29 patients in the control group were not.

The scientists found that patients using cannabis were 17 times more likely to stop their prescribed opioids and five times more likely to lower their daily dosage of opioids. On average, they cut their doses in half. Comparatively, the patients not enrolled in the medical marijuana program actually increased their opioid usage by more than 10%.

The cannabis use also had a positive effect on the life of the patients overall, with most reporting improved levels of activity, social life and concentration. None of the patients in the program reported adverse effects. 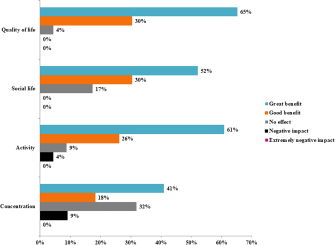 Effects of medical cannabis on the quality of life, social interactions, activity levels and concentration. Credit: PLOS One.

Overall, over 40% of medical cannabis patients stopped filling their opioid prescriptions completely after about a year and a half of being in the program. This result indicates that medical marijuana can be used as an effective alternative to opioids, say the scientists, especially in light of the statistics that over 90 people die from opioids every day in the U.S.

“If cannabis can serve as an alternative to prescription opioids for at least some patients, legislators and the medical community may want to consider medical cannabis programs as a potential tool for combating the current opioid epidemic,” wrote the scientists.

The researchers stress that their findings are preliminary and further studies are necessary, with larger samples.

Related
Neuropsych
How you breathe affects your brain
Your breathing rhythm influences a wide range of behaviors, cognition, and emotion.
Health
What happens when regular porn watchers abstain for a week?
Researchers watched for signs of withdrawal — but didn’t find any.
Neuropsych
Daily caffeine intake temporarily alters your brain structure
Compared to people who took a placebo, the brains of those who took caffeine pills had a temporarily smaller gray matter volume.
Thinking
Why you should laugh at yourself, according to Seneca and Nietzsche
“It is more human to laugh at life than to lament it.”
Hard Science
The violence of the Tonga eruption is a wake-up call to watch other submarine volcanoes
Out of sight, but not out of mind.
Up Next
The Present
To Certain White American Males, a Gun is an Important Symbol
Unraveling the psychology behind gun ownership may offer fresh insight into the gun control debate.