A lot of people consider ecstasy to be one of the safe drugs, but that’s becoming less and less true. The MDMA it contains is becoming stronger on one hand, and on the other, tablets are often impure, with all sorts of nasty stuff thrown in. Research by Florida House Experience (FHE) looks at the state of the love drug in the U.S. in a series of new infographics.

In theory, an ecstasy pill is 3,4-Methylenedioxymethamphetamine, or “MDMA” introduced as a help for “talk” psychotherapy in the 1970s. According to the NIH, MDMA boosts the levels of:

Side effects can include:

The aftermath of ecstasy is sort of the opposite of the hug-drug experience. In the following week, it’s not uncommon to experience:

FHE reports that today’s MDMA is about five times stronger than it was as recently as 2009, to potentially lethal levels. And as MDMA’s strength continues to increase, its downside becomes more a factor, the norepinephrine boost is more dangerous, and taking E more often leads to further usage a way to avoid the after-effects. (As to whether MDMA is physiologically addictive, the jury is still out, according to the NIH.) Having said all that, we leave you to decide if the fact that ecstasy in the U.S. is becoming more pure is good news or bad. 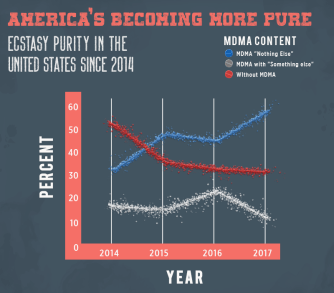 Is This E or Something Else?

Of course, knowing what’s in any given pill is also very complicated, given the number of variants that exists, as well as regional differences. Pills are cut with all manner of nasty stuff, from amphetamines to piperazine, and more: The DEA has found some 200 other compounds in drugs marketed as ecstasy since 2009, with 80 just since 2012, according to FHE.

Oh, and about Molly: Many assume that one of ecstasy’s variants, Molly, is the surest bet for getting pure MDMA, but, in fact, the opposite is true. EcstasyData.org reports that it’s the form of E that’s least likely to be pure.

The Purity of E Colors

Broken down by tablet color, here are the average purity levels associated with each tablet hue. 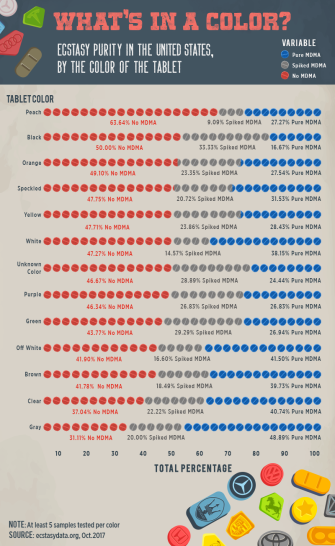 The Purity of the Car Brands of E

Ecstasy bearing a car brand will generally have purity approximating the hotness of the associated car. At the top of the lot are Tesla and Lamborghini. Surprisingly, Rolls Royce doesn’t seem to be so well-regarded in the E community.

We know that Superman and Batman aren’t usually considered evil, but they can apparently pack a lethal punch in E world. FHE recounts the cases of three unlucky users who were found dead on New Years Day 2013, their Superman tablets having contained high amounts of PMA (para-Methoxyamphetamine), a substance 10 times more potent than MDMA.

As was the case in the recent movie, Superman and Batman come out about even in the data. Oddly, the generic Warner Brothers pills are purer than either of them, with no sign of the MCU in E world. 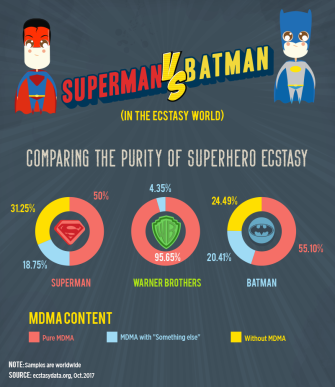 No Longer Such a Safe Experience

What all of this suggests is that using ecstasy these days in certainly no longer the safe recreational experience people could once assume it was. Ingesting E is a three-way roll of the dice: Will a tablet contain too strong a dose of MDMA, could it contain some other secret chemical horror, or will it be alright? The data suggests taking E now is less of a ride to love and trust and more and more a frightening ride to worry and doubt.

Related
The Past
How the death of alchemy gave birth to modern science
Far from practicing witchcraft, the experimentation of medieval alchemists helped bring about the Scientific Revolution.
The Well
This is what the fourth dimension looks like
Left–Right, Back–Forth, Up–Down. What’s the fourth dimension?
▸
3 min
—
with
Brian Greene
The Present
How heat pumps of the 1800s are becoming the technology of the future
Innovative thinking has done away with problems that long dogged the electric devices — and both scientists and environmentalists are excited about the possibilities.
Starts With A Bang
JWST’s hunt for most distant galaxies gets double boost
Along with gravitational lensing and ALMA’s incredible long-wavelength spectroscopy, JWST is reshaping our view of the early Universe.
Thinking
Finding your essential self: the ancient philosophy of Zhuangzi explained
Adopting a healthy scepticism towards inherited ideas means “emptying the container of the Self.”
Up Next
The Present
Transgender woman becomes the world’s first to breastfeed baby
A transgender woman was able to breastfeed her baby after completing an experimental treatment regimen, but it’s still not clear what the effects of the breastmilk might have on the child.