Funerals are rarely joyous occasions. This is a matter of culture, not an unalterable fact of death. The ceremony, as presented in America, is mostly an opportunity for the living to contemplate their own mortality. Our common burial ritual—somber, sober, quiet—rarely inspires relatives and friends to honor the deceased as much as mull over their eventual end.

Yet funerals are perfect opportunities to pay tribute to those who are gone in an inspiring manner. Millions of people in Jamaica (and hundreds of millions around the world) were shocked when Bob Marley passed at age 36. Sure, there was introspection and sadness, but the ceremony was, as the video below shows, filled with singing, dancing, and positive vibrations, which is exactly what Bob would have wanted from such an affair.

Most of us will not influence the world like Marley, but that does not mean we cannot have a positive impact on the planet we leave behind. In fact, regardless of what happens to our body, burial or cremation, we will fertilize the earth in some capacity. Best to do it in the most eco-friendly manner possible.

Enter recomposting. Instead of purchasing an overpriced casket and paying ludicrous amounts for services—the American funeral industry is currently valued at $20.7 billion—recomposition involves converting organic human remains into soil. We’ve known about turning our bodies into trees for some time; recomposition is the soil in which tree urns are planted.

This movement is being led by Katrina Spade, who founded the Seattle-based organization, Recompose. She first envisioned her organization after a friend introduced her to the process of recomposting livestock after they die:

It was like a lightbulb went off and I started to envision a system that uses the same principles as mortality composting … that would be meaningful and appropriate for human beings.

The recomposition process is not entirely dissimilar to how you compost organic materials at home:

The process utilizes a 5-foot-by-10-foot pod full of organic “tinder” such as straw and wood chips. Thermophilic or heat-loving microbes then metabolize the remains, maintaining an internal temperature of 131 degrees Fahrenheit within the vessel. The entire ritual takes one month, and produces a cubic yard of compost, according to Recompose.

If this sounds like a pipe dream for environmentalists, at least one legislator is taking it seriously. Democratic Washington state senator Jamie Pedersen is introducing a bill this month to make recomposting a viable choice. In fact, choice is what inspired Pedersen to introduce this bill in 2017. As he said at the time:

People from all over the state who wrote to me are very excited about the prospect of becoming a tree or having a different alternative for themselves.

Sadly, his 2017 bill was blocked by religious groups. Such arguments are odd, indicative of humans believing we’re “above” or “separate” from the earth. This mindset is a leading driver of climate change (and not ironically, the traditional funeral process adds carbon to the atmosphere): we believe we have dominion over the earth, unsustainably exhausting its resources at every opportunity. 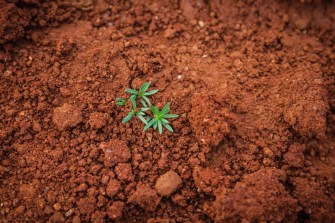 As soil researcher Lynne Carpenter Boggs, who has worked with Recompose on this project, says:

The advantage that I see as a soil scientist and an environmental scientist is that it is relatively low in resource use and it also creates this soil-like or compost-like product that helps to store carbon.

Recomposition is not only a more sustainable way to die, it’s also a more spiritual process than sealing off bodies inside of boxes. As Alan Watts once proclaimed, we were not born into this world, but grew up out of it. Turning our organs and flesh into soil is a beautiful way to return to that which gave us life.

Not everyone is eligible for recomposition, however. If you die from certain infections, such as Anthrax, you will not be a candidate. Likewise artificial body parts, such as replaced hips or pacemakers, will keep you (or part of you) from becoming soil. Recompose is currently setting pricing (a previous estimate was $5,500, below the average traditional burial at $7,000) and defining limitations as it perfects its process.

With the Washington state Senate now under Democratic control, Pedersen believes his bill will pass later this month. Though Governor Jay Inslee has not commented on the topic, if the bill was to make its way through the legislative process, it would kick into gear on May 1, 2020.

A study finds that older adults who cannot balance on one foot for ten seconds have an 84% higher risk of death than those who can.
Up Next
Starts With A Bang

Top 10 Highlights Of What 2019 Will Hold For Science

Two of the possible models that can successfully fit the Event Horizon Telescope data thus far, as of earlier in 2018. Both show an off-center, asymmetric event horizon that’s enlarged […]