One of the most disturbing movies I’ve ever watched is The Diving Bell and the Butterfly. Based on French fashion editor Jean-Dominuqe Bauby’s book of the same name, it chronicles his life after waking up with locked-in syndrome having suffering from a massive stroke. While Bauby’s mental faculties were entirely intact, he was paralyzed save the blinking of his left eyelid, which is the method he used to “write” his book.

Empathy is the vehicle of upset, why I shuddered during the entire film. Imagine yourself unable to move anything but an eyelid and remain completely aware of your condition. Bauby suffered from pseudocoma; there is also total locked-in syndrome, meaning you no longer have use of your eye muscles either. Still, you remain conscious.

Such a condition begs the question: Is this even living? It also brings to mind another question, one that is surprisingly more malleable than you might imagine: What does death mean? Turns out there are a variety of responses.

The latest issue of the Hastings Center Report (which you can access for free here), Defining Death: Organ Transplantation and the Fifty-Year Legacy of the Harvard Report on Brain Death, looks at the ways in which various cultures view death. There is no one singular answer.

In ‘Death: An Evolving, Normative Concept‘, NYU Bioethics professor Arthur Caplan relates the story of Constantin Reliu, a Romanian who traveled to Turkey to make a living as a cook. At some point he lost contact with his family; his former wife reported him deceased to Romanian officials. After a 26 work trip, Reliu returned to his homeland. Only his government wouldn’t accept the fact that he was alive.

His former wife had, unbeknownst to him, at some point during his stay in Turkey registered him as deceased in Romania. He has since been living a legal nightmare trying to prove to Romanian authorities that he is, in fact, alive.

Death, beyond a biological fact, is also cultural. As Caplan points out, definitions change not only nation by nation, but in America, state by state. In New Jersey, for example, the family of a vegetative patient has the right to decide whether or not brain death is actual death.

This might seem like a game reserved for philosophers and doctors, but there are real-world consequences when it comes to organ donors. If someone suffers brain death with no chance of recovery yet still has viable organs for donation, should it be considered immoral to keep that person alive until their organs are rendered useless? If someone else could have been saved thanks to the beating heart of a brain-dead patient, why would anyone deny the life of another? 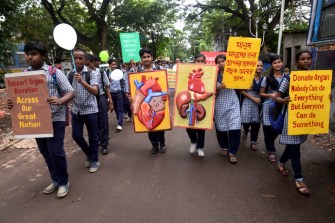 It makes sense that we’d favor the loved one in front of us over someone we don’t even know. Death, of course, is no easy prospect; its denial has led some to claim it causes the bulk of our neuroses while living. A body does not all die at once, however. Caplan cites a study in Berlin and Cincinnati where patients had their electrical signals in their brain monitored as they were dying:

Even after a person’s heart had stopped for five minutes, cellular activity could still be detected. How often this is true in those declared dead due to cardiac failure, no one knows.

With technological advancements in health care, corpses can even be maintained “in some state of biological vitalism.” It is possible that cellular functions and tissue growth can occur thanks to machinery. But to what end? No one wants to look at a dying person as a compilation of parts ready for dispersal. But if that person’s vitalism is truly depleted, their biological legacy can live on in other bodies.

As health care is tied more into our smartphones and other devices and AI potentially extends our lifespans in innovative ways, this question is certain to become harder to answer. The line between machinery and biology has been explored for decades. As we implement new applications of technology, we might also have to once again change our definition of death. Just how much that adds to life remains to be seen.

Climate activists’ brand of iconoclasm is far removed from the Beeldenstorm that swept medieval Europe.
The Future

Psychologists are finding that moral code violations can leave an enduring mark — and may require new types of therapy.
Up Next
Neuropsych