The phenomena of menopause is a conundrum that has long baffled evolutionary biologists. But new research on killer whales suggests that this is because grandmothers play a powerful role in the survival of subsequent generations.

Around age 50, a woman’s ovaries stop producing eggs, officially liberating her from her reproductive responsibilities and biological functions: Menstruation, pregnancy, lactation, repeat. Though many primates die out after this point, humans live on decades after menopause. From an evolutionary perspective, this suggests that women are essential to the survival of our species beyond their direct ability to bear children.

Enter “The Grandmother Hypothesis,” which has theorized that by surviving long past menopause, a woman improves the survival and reproduction of her children’s children. This way, she ensures the continuation of her own genes into the next generation. In the past, skeptics dismissed the hypothesis, arguing it’s always more genetically beneficial for a female to have her own children, rather than throwing in the towel half-way through and using her time and energy to help raise her children’s children.

But a new paper published in PNAS last month tested and significantly backed the powerful benefits of having post-reproductive grandmothers in killer whales communities. 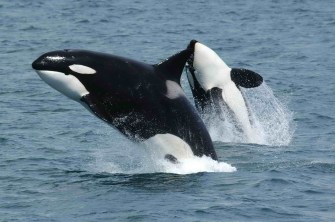 Like humans, female whales live decades past their reproductive potential. And, like humans, they can continue to have babies after they become grandmothers. In a new study, researchers sought to find out if post-reproductive grandmother whales helped their offspring better than grandmothers that were still reproducing. Of course, to get the genetic “fitness” benefits, grandmothers and their offspring need to be able to interact. In killer whale communities, offspring do not leave their mothers once they reach reproductive age. This results in a close-knit matrilineal family structure in which a grandma whale groups with her offspring.

To do the test, the researchers collected data on two groups of killer whales. One group in the coastal waters of Washington State and the other in British Columbia, Canada. Genealogical whale relationships were inferred from long-term observations of social organization, and mothers were identified by their repeated association with young calves. The researchers recorded whale births and deaths, and also controlled for the important environmental factor of salmon abundance.

What the researchers discovered was that not only did grandmothers significantly increase the survival of their grandoffspring, but grandmothers were even more beneficial to their grandcalves when they were no longer reproducing.

Why grandmother whales are vital resources

The study found that if a whale lost its grandmother, its survival rate took a sharp dip within the two years of her death. This was true even of whales who were up to 20 years old. When salmon abundance was lower, the role of the grandmother whale was found to be more significant, suggesting that the grandma whale’s accumulation of ecological knowledge was a vital resource for the survival of whale families.

After all, whales are gregarious creatures. Young killer whales need guidance in finding food after they have been weaned. Not only do grandma whales help raise and share their own food with their grandoffspring, they bequeath decades of foraging wisdom onto the next generation, guiding them to the best feeding spots. The researchers noted that as salmon populations continue to decline due to ecological threats, whale grandmothers may become increasingly important.

This beneficial effect was enhanced when the grandmother whale was no longer reproducing. It makes sense, as she wouldn’t be using her time, energy, and resources being pregnant, lactating, or ensuring her new children survives. This corroborates previous studies that found that menopause might be beneficial because it means that competition for resources is thinned out between generations of females. This could be why in humans, women on average tend to stop reproducing almost right around the time when their offspring start. 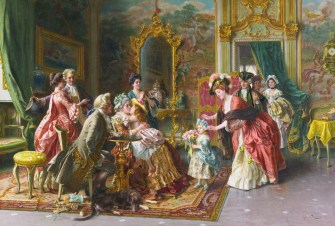 The power of grandmas

Ultimately, this study proves what many of us intuitively knew: Grandma is a badass. It’s grandmothers, and the generations of matriarchs before them, we can thank for our existence.

Why are we here? What is everything made of? This theoretical physicist says science isn’t the right way to answer these questions.
▸
6 min
—
with
Jim Al-Khalili
Up Next
Neuropsych

A unique brain signal may be the key to human intelligence