The perfect balance of the stack. The fusion of equilibrium and irregularity. How the stones come from nature yet stand apart. There’s just something alluring about stone stacks, and given the prehistoric record of such structures, that allure speaks to something within us that is universally human.

Small wonder then that stone stacking has surged in popularity. Some find the process restful and meditative, while others thrive on the creative challenge or chance to leave and share their mark. Some even ascribe it a spiritual meaning, a way to connect with God or Mother Nature. Whatever their reasons, stone stackers have flocked to national and state parks to enjoy the discipline among nature’s beauty.

But talk to a conservationist, and you won’t get such a rosy picture of these mineral masterpieces. “Leaving your mark, whether carving your initials in a tree trunk, scratching a name on a rock, or stacking up stones is simply vandalism,” pronounced Zion National Park on its Facebook page.

Proponents agreed with Zion, claiming that stone stacks were eyesores that distracted from the park’s natural beauty. Conversely, opponents argued stone stacks were no big deal. Unlike true, irreparable vandalism, moving a few stones didn’t permanently degrade the landscape. While the question of whether stone stacks are aesthetically pleasing is, obviously, a matter of taste, when it comes to the question of environmental vandalism, research and evidence have sided squarely with Zion. 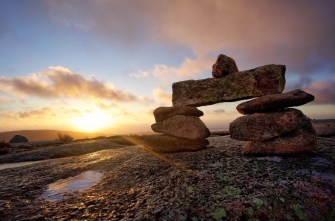 A Bates cairn at Acadia National Park. Revived in the ’90s by park officials, these cairns mark the park’s many interlocking trails.(Photo: Brandon Hoogerhyde/National Park Service)

It’s true that stone stacks, or cairns, have a deep and diverse history. Peoples across the ancient world used cairns for a host of functions, and those passed down into the modern world have become some of our most cherished cultural heirlooms.

The Scots—who gave us the word “cairn,” from the Gaelic meaning “heap of stones”—have cairn traditions going back to the Neolithic period. Throughout the country’s history, its people employed cairns as trail markers to help navigate challenging landscapes. Reliable and long-lasting, these markers were a perfect method to signal direction in preliterate eras.

The ancient Scots also used cairns and other stone structures for grave markings, maritime navigation, and as symbols to celebrate successful summits. A famous example of the former is the Clava Cairns, a Bronze Age cemetery dating back more than 4,000 years. Cairns proved so important in Scottish culture that they even found their way into an ancient blessing, “Cuiridh mi clach air do charn.” Translation: “I will put a stone on your cairn.”

To the west, Mongolians erected cairns to lead horse-backed nomads toward safety, food, and shelter. Early Norse sailors utilized them as pre-lighthouse technology to steer their native fjords, rivers, and coastal lands safely. There’s even some evidence that the Norse used cairns to demarcate their farmsteads from the natural landscape.

In North America, the historical record is a bit spottier. In the American Northeast and Southwest, some evidence exists that Native Americans used cairns to mark trails and memorials. But dating cairns is difficult, so scientists can’t determine whether they were built by native peoples or European explorers who brought the tradition from their home countries.

One indigenous people we know built cairns are the Inuits. The Inuits called their stone structures “inuksuk,” which means “to act in the capacity of a human.” That’s because inuksuit—the plural form of the word—act in the capacity of a human helper. They provided services as varied as navigational markers, message centers, food caches, and denoting places of tragedy or spiritual veneration. The Inuit even developed an inuksuk morphology (which you can read about here).

And cairns continue to serve modern hikers today as many national parks construct authorized cairns to mark trails. If you’ve only hiked the manicured forest trails of the Pacific Northwest, you may not have encountered such cairns. However, in national parks where the topography is uniform or difficult to navigate, cairns are used to keep hikers from becoming lost.

Acadia National Park, for example, revived the use of Bates cairns in the 1990s. Named after Waldron Bates, who developed the unique style in the late 1800s, these cairns feature two or more base stones propping up a long bridge stone. The bridge stone serves as a pointer, directing hikers toward the proper trail across the park’s granite summits. 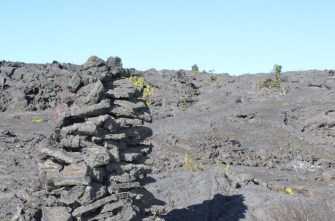 Today’s stone stacking, however, is detached from the cairns of yesteryear. Outside of authorized cairns, the stone stacks found in national parks weren’t built to help hikers find their way or to warn an unlearned traveler or lead someone to a life-saving cache of food. They are built for personal satisfaction, artistic attainment, and Instagram recognition. While those endeavors aren’t disruptive alone, scientists and conservationists warn that its modern vogue is devastating the ecology of our national parks and natural reserves.

According to Leave No Trace, a nonprofit that promotes outdoor ethics, stone stacks injury our national parks in three ways. The first is ecological; moving rocks reveals the animals that use those rocks as homes. Such exposure leaves these creatures vulnerable to the elements and predators while also risking their food and shelter.

The second is geological; moving rocks generates faster rates of weathering and erosion by exposing the soil beneath to the winds and rains. The third is aesthetics. While some people find stone stacks pleasing, others visit national parks to escape to a place ostensibly free of human influence. To such people, stone stacks are as vulgar as litter or initials carved into trees by generations of teenage darlings.

“A forest of stacked stones destroys all sense of the wild. Stacks are an intrusion, enforcing our presence on others long after our departure. It’s an offence against the first and most important rule of wild adventuring: leave no trace,” nature columnist Patrick Barkham writes on the subject.

Scientists have seen evidence for the first two injuries. In a letter to the editor of Human-Wildlife Interactions, 14 scientists and conservationists discuss the threat stone stacks pose to rock-dwelling biodiversity. The signatories’ case study is Ponta de São Lourenço, a peninsula on the Eastern tip of Madeira Island, Portugal. A popular hiking destination, the peninsula hosts about 150 visitors per day, and over the last few years, some of those visitors have taken to crafting stone stacks back-dropped by the island’s Atlantic beauty.

“We use this case in point to argue that, in areas of conservation concern, authorities should impose restrictions to this practice and quickly dismantle stone towers to avoid a contagious effect that often encourages the construction of more such structures,” the letter states.

The signatories write that across a one-hectare area, the presence of fewer than 200 such stacks has led to significant soil erosion and vegetation damage. This deterioration has endangered many endemic species that call the peninsula’s microhabitats home. They include the critically endangered Riccia atlantica, a thallose liverwort that lives among rock crevices; the Madeira wall lizard, which uses surface rocks as a retreat; and the 35 known species of mollusks that occupy the small surface rocks. Several such species, the signatories note, are narrow-range endemics, meaning they can only be found on this small peninsula, their survival greatly dependent on the equilibrium of this specific microhabitat.

Places like Madeira Island, or any national park, are set aside as areas of conservation, not simply recreation. The mission of the U.S. National Parks Service “is to preserve and protect our natural and cultural resources unimpaired for current and future generations” [emphasis ours]. While liverwort, lizards, and mollusks may not spur the conservationist soul as, say, a big-eyed baby panda, these species are nonetheless intrinsic elements to biodiversity and our natural heritage. And ones in critical danger of being overlooked. 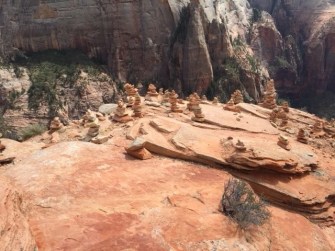 Of course, any one stone stack isn’t much of a concern; the problem is one of scale. While ancestral cairns were produced at a more artisan pace, today’s stone stacking has practically become industrial, driven by an economy of clicks and likes.

“Social media has kind of popularized stone stacking as meditative, and you used to have a handful of people doing it, but it has really escalated over the past few years on public lands,” Wesley Trimble, the program-outreach and communications manager for the American Hiking Society, told the New Yorker.

Acadia National Park, for example, is one of the most visited national parks in the U.S., hosting more than 3.5 million visitors per year. It’s also relatively small—47,000 acres compared to Yosemite’s 760,000 or Yellowstone’s more than 2 million. With such a density of human activity, even minute damages have the potential to devastate Acadia’s ecology if performed by enough people.

As Christie Anastasia, Acadia’s public affairs specialist, told Big Think in an interview, in 2016 and 2017 park volunteers deconstructed nearly 3,500 illicit stone stacks on just two mountains—the influence of potentially less than one percent of visitors. Luckily for park visitors, Acadia’s rangers and generous volunteers have been trained to dismantle illicit stacks and replace the stones in a way that limits repercussions. But that initial displacement still damages the landscape and leaves creatures homeless during the interim.

That’s just Acadia. In total, U.S. national parks hosted more than 328 million visitors in 2019, a number that clarifies the exponential damage small stone stacks can cause if even just one percent of visitors take up the hobby.

“People come to national parks for lots of different reasons, but our parks have been set aside as historic and cultural resources in an unaltered state. When people come across these stone stacks, that can hurt their experience,” she said. 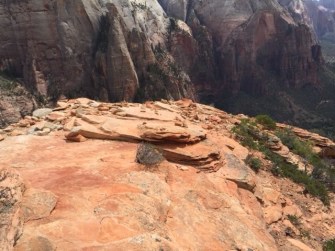 When it comes to nature and our national parks, writers, conservationist, and scientists all agree on one unassailable rule: Leave no trace. When it comes to obvious human influences, such as plastics, dog scat, or forest fires, few would disagree.

But for many, stone stacks are beguilingly innocent in this regard. The materials come from the land and seem perfectly attune with nature. They blend our dual loves of artistry and the environment, and when these projects step outside of time and pass down to us from our ancestors, they crown some of our most cherished historical sites.

If you want to stack stones, you can do so without fault in your backyard or interurban park or man-made beach. Leave your mark there and proudly share your creations on social media. But when it comes to nature, our actions add up to a social whole we must be conscious of. We can leave our mark in both what we create and what we leave untouched.

Whether or not life exists elsewhere in the Universe, we can be assured of one thing: We are the only human beings in the cosmos.
Up Next
Starts With A Bang

Ask Ethan: How Do We Know How Old The Universe Is?

Our entire cosmic history is theoretically well-understood, but only because we understand the theory of gravitation that underlies it, and because we know the Universe’s present expansion rate and energy […]