For some time, scientists have suspected that sharks belong among the growing number of animals known to navigate using Earth’s magnetic field. Testing anything with a shark, though, requires some care.

“The reason this question has been withstanding for 50 years is because sharks are difficult to study,” saysBryan Keller of the Save Our Seas Foundation. “To be honest, I am surprised it worked.”

The key was selecting the right candidate. Keller and his colleagues chose the bonnethead shark, Sphyrna tiburo, a small critter that summers at Turkey Point Shoal off the coast of the Florida State University Coastal and Marine Laboratory with which Keller is affiliated.

Bonnetheads elsewhere have been known to complete 620-mile roundtrip migrations. As the lab’s Dean Grubbs puts it, “That’s not bad for a shark that is only two to three feet long. The question is how do they find their way back to that same estuary year after year.” There’s a report of a great white shark migrating between two locations, one in South Africa and another in Australia, year after year.

The research is published in Current Biology. 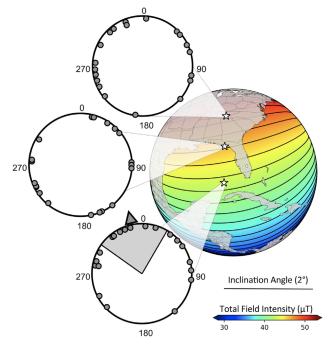 These are the three places the bonnethead sharks were magnetically fooled into thinking they were located.Credit: Keller et al. / Current Biology

Keller and his team rounded up 20 local juvenile bonnetheads and transported them into a holding tank at the marine lab. For the tests, the researchers simulated three real-world magnetic fields. As the various magnetic fields were activated, the sharks’ movements were captured by GoPro cameras and their average swimming orientations calculated by software.

The first simulation, serving as a control, mimicked the magnetic field of the nearby shoal from which the sharks had been captured. When this field was activated, the sharks essentially acted like they were “home,” just swimming around as they do.

A second field was the magnetic equivalent of a location 600 kilometers south of the lab within the Gulf of Mexico. When this field was activated, the sharks, apparently mistaking themselves for being far south in the Gulf, began swimming northward toward the shoal.

The opposite occurred with a field standing in for a location in continental North America 600 km north of their home shoal — the sharks began swimming southward.

“For 50 years,” says Keller, “scientists have hypothesized that sharks use the magnetic field as a navigational aid. This theory has been so popular because sharks, skates, and rays have been shown to be very sensitive to magnetic fields. They have also been trained to react to unique geomagnetic signatures, so we know they are capable of detecting and reacting to variation in the magnetic field.”

His team’s experiments confirm what’s long been suspected, Keller says: “Sharks use map-like information from the geomagnetic field as a navigational aid. This ability is useful for navigation and possibly maintaining population structure.”

Even addition has to play by different rules for black holes.How do you add 28 and 47 together? This simple math question helps us highlight the many different ways that people […]