Scientists have identified a new species of tiny shark that secretes a glow-in-the-dark liquid.

The 5.5-inch specimen — dubbed the American Pocket Shark, or Mollisquama mississippiensis — was first discovered in 2010 in the Gulf of Mexico during a NOAA mission to study sperm whale feeding. In a recent study, researchers identified its species by using a dissecting microscope and studying radiographic (x-ray) images and high resolution CT scans.

The findings are published in a paper in the animal taxonomy journal Zootaxa.

“In the history of fisheries science, only two pocket sharks have ever been captured or reported,” Mark Grace of the NMFS Mississippi Laboratories of NOAA said in a press release. “Both are separate species, each from separate oceans. Both are exceedingly rare.” 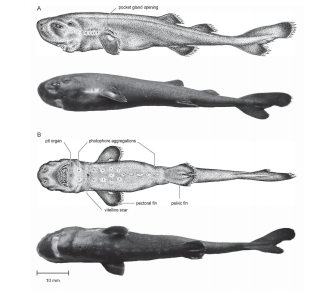 The first pocket shark was discovered in 1979 in the East Pacific Ocean, but the new study confirmed that the shark found in 2010 was a separate species. Although “pocket” can refer to these sharks’ small size, the term actually describes two pocket glands that scientists believe can produce a bioluminescent fluid that helps attract prey.

Still, little is known about these deepwater fish.

Henry Bart, director of the Tulane Biodiversity Research Institute, added: “The fact that only one pocket shark has ever been reported from the Gulf of Mexico, and that it is a new species, underscores how little we know about the Gulf — especially its deeper waters — and how many additional new species from these waters await discovery.”

​How many undiscovered species probably exist in the ocean?

Not only is it hard to answer this question, but it’s even hard to tell exactly how many marine species have already been discovered. Finding that number would require sifting through thousands of scientific papers and reports, and cataloguing the results in one central database – like the World Register of Marine Species (WoRMS), which currently contains more than 240,000 marine species.

As for estimating the number of undiscovered species, scientists generally take one of two approaches, as described by Andy Solow, director of the Marine Policy Center and a Senior Scientist at Woods Hole Oceanographic Institution:

“One approach is based on the species-area curve, which summarizes how the number of species in a region increases with the area of the region,” Solow wrote forSmithsonian Ocean. “By seeing how species accumulate as the area covered by taxonomic surveys increases, biologists can make estimates about how many species are in a region with an area as large as the ocean. A big problem with this approach is that the total area covered by taxonomic surveys is a miniscule part of the ocean, and thus different prediction methods can give vastly different answers.

“Another popular approach uses the way in which species discoveries accumulate with time to estimate future discoveries. For some groups, like marine mammals, the discovery rate has fallen off rapidly and perhaps not that many more species remain undiscovered. However, for other groups, such as invertebrates, the discovery rate has actually increased steadily over time, so an estimate based on this ever-increasing rate is essentially infinite. But this method has a more fundamental problem: the discovery record on which this approach is based is the product of human activity, not some natural process.”

Hint: It wasn’t always an asteroid.
The Present

Americans on average consumed about 58 pounds of beef and veal in 2019 – compared with a global average of 14 pounds.
The Past

Rock art in northern Australia depicts marsupial lions, giant kangaroos, and other megafauna that populated the Land Down Under long ago.
Up Next
Health

7 things everyone should know about autism

Autism is a widely misunderstood condition surrounded by falsehoods, half-truths, and cultural assumptions.