The platypus is at greater risk of extinction than previously thought, suggests a new study published in the February issue of Biological Conservation.

The strange egg-laying, river-dwelling mammal is currently listed as endangered in South Australia, and as “Near Threatened” on the International Union for Conservation of Nature’s Red List. But the researchers behind a new analysis of platypus populations say there’s strong evidence that platypus populations are declining in Australia and Tasmania, the only two countries where the secretive animals exist in the wild. 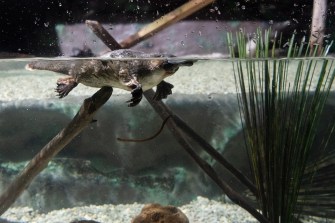 “There is an urgent need for a national risk assessment for the platypus to assess its conservation status, evaluate risks and impacts, and prioritize management in order to minimize any risk of extinction,” Bino toldScience Daily.

The study estimated the future decline of platypus populations by considering current rates of climate change, drought, and land and water development. Under this model, the results showed that the platypus population is likely to drop 47 percent over the next 50 years. Drought is expected to be a particularly deadly threat to the species. 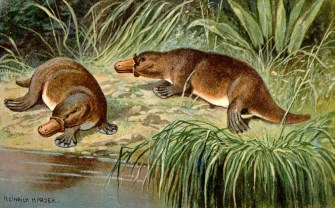 Australia has recently suffered some of its worst droughts on record. The researchers suggested that even more extreme droughts are likely to occur in the future, considering that the changing climate will bring even hotter temperatures. Droughts can destroy platypuses’ burrows, which the animal usually constructs by digging into the riverbank with its claws. When droughts dry up these hiding spots, platypuses are forced to move into new areas where they risk becoming prey to predators like foxes, dogs, and cats.

Droughts can also increase the likelihood of deadly bushfires. The current bushfire crisis in Australia wasn’t mentioned in the recent study, but experts estimate that some 1 billion animals have been killed so far in the fires. As for how many platypuses died:

“The short answer is that we simply don’t know,” Josh Griffiths, an ecologist with the environmental consulting firm Cesar Australia, toldAtlas Obscura in an article published January 24, 2020. “The scale of the fire we’ve got at the moment is unprecedented. […] It’s one more nail in their coffin.”

How to save the platypus

Human development, especially that which involves altering rivers, is another major threat to the platypus. Study co-author Richard Kingsford, director of the UNSW Centre for Ecosystem Science, noted that many platypuses live in areas of Australia currently undergoing development.

“These include dams that stop their movements, agriculture which can destroy their burrows, fishing gear and yabby traps which can drown them and invasive foxes which can kill them,” Kingsford told Science Daily.

The researchers offered several suggestions for how to protect the platypus:

In 2019, the United Nations reported that some 1 million species of plants and animals are at risk of extinction, with climate change being a major reason. It’s an unprecedented threat to biodiversity, as Patricia Miloslavich, a senior professor in the Department of Environmental Studies at Universidad Simón Bolívar, told CBS News.

Missing link? More like the weakest link.
Up Next
Health

A new hypothesis suggests that you can “catch” noncommunicable diseases from other people via the microbiome.