Animals are in constant communication with their environments. This reality has largely been shielded by modern humans, with controlled indoor climate and an unbelievable assortment of foods available year-round. For most of humanity’s time here these conveniences weren’t the case. We had to battle nature to win sustenance, and such battles had biological consequences.

Take a new finding regarding Neanderthals, for instance.

Of the 23 Neanderthal skulls researchers recently studied, roughly half of them were affected by bony growths called exostoses. Since today few of us have to pull our dinner from the ocean, this is a rare condition, though, as the name suggests, surfers do experience this irritation to their ear canals.

The researchers note that people that live in higher altitudes and northern lands do not exhibit this condition, likely because water is too cold for them to swim around in. Yet for those closer to sea level, bony ear bumps were a common nuisance. Whereas today a quick surgery puts surfers back in the water immediately, it is likely that Neanderthals lived with this condition for life. While not existentially threatening, it does affect hearing, another important ability.

Unless you’re a fanatic, chances are you spend little time flopping around in the ocean. Trace the evolutionary chain back far enough, though, and all organic life began in this liquid. As omnipresent as it is, covering 70 percent of the planet’s surface, we know startlingly little about what occurs in its depths: 95 percent of the world’s waters have yet to be explored. It may have birthed us, but we have been away from home for some time.

We’re still far away from understanding all of its mysteries.

Neuroconservation — your brain on nature: Wallace J. Nichols at TEDxSantaCruz

Neuroconservation — your brain on nature: Wallace J. Nichols at TEDxSantaCruz

The ocean’s perpetual mystery is relenting, though. In 2012, the director James Cameron broke a solo diving record by descending nearly seven miles into the Mariana Trench. New technologies are allowing us to discover unimaginable life on ocean floors. Unique creatures provide visual fodder for active imaginations, yet water was, and remains, the singular reason “we” exist.

Behavioral ecologist Clive Finlayson concocted his Water Optimization Hypothesis to explain how deeply tied to the oceans, rivers, and seas we are. While subject to critical scrutiny, Finlayson argues that our ancestors needed to adapt to ever-changing environments. Bipedalism favored us for exploring long ranges of territory to work around droughts and floods, keeping us close to water (and therefore food) sources.

Other research points out that in the “cradle of humanity”— the stretch of land now referred to as the Rift Valley, extending from Ethiopia to Mozambique — our ancestors were subjected to 23,000-year cycles of aridity and monsoons. Early human survival depended on a network of springs that kept our forebears alive when the rain gods refused to supply nourishment.

Water remains essential today, which is why our plastic problem is becoming dire. Eighty percent of the world’s population lives within 60 miles of a coastline. A whopping two-thirds of the world’s economy depends on water in some capacity, be it by travel or resources — a billion people rely on water-based protein for their existence. As scientist Wallace J. Nichols, author of Blue Mind, writes,

“According to the U.S. Geological Survey, each person in the United States uses eighty to one hundred gallons of water every day for what we consider our ‘basic needs.’ In 2010 the General Assembly of the United Nations declared, “Safe and clean drinking water is a human right essential to the full enjoyment of life.” 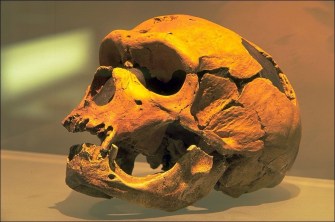 Prehistorical museum in Quinson, France on May 29, 2001 — Neanderthal. Cranium and mandible of the Chapelle aux Saints (Correze).

Though we know the importance of water, its appearance on this planet remains somewhat of a mystery. As British paleontologist Richard Fortey writes, if not for Earth’s gaseous atmosphere and water, life would have never occurred. Thankfully, as our planet’s solid crust formed, volcanoes and vents spewed the gases and liquids necessary to create an ecosystem that plant (then animal) life could be born of and subsequently thrive in.

Roughly a billion-and-a-half years ago single-celled eukaryotes began swimming around in the soup; part of their distinguishing feature is an “eyespot,” which is attracted to light. Thus began what the Australian philosopher Peter Godfrey-Smith calls the “sensory-motor view” of the nervous systems of organisms to their environment. Since that critical development, every form of life has responded to and been shaped by natural forces, especially water.

For Neanderthals, this meant surfer’s ear; for modern Westerners, diseases of affluence — heart disease, cancer, obesity — that occur when you cut yourself off from nature and its processes. Still, the evolutionary consequences of this longstanding relationship remain, even in the most unlikely places, such as wrinkly toes and fingers when we play in an ocean (or bathtub) for too long.

This common phenomenon too seems shrouded in mystery. The best guess we have is that it helps improve our grip in water; it’s hard enough to tackle a fish without having some evolutionary advantage. Thus, our autonomic nervous system kicks in after long stretches in water, causing our blood vessels to constrict below the surface of our skin. This likely allowed our ancestors to better pick fruit from wet locales and grip the forest floor during a rainstorm.

We might not be aquatic apes, as David Attenborough and others have attested, but humans have long relied on water for survival. This relationship will continue until we destroy the very environment that made life possible, which means we’re going to have to start giving back what we’ve been taking from for far too long. You can’t be absent children without consequence.

Tags
ancient worldenvironmentEvolutionary biologyhuman bodynaturewater
In this article
ancient worldenvironmentEvolutionary biologyhuman bodynaturewater
Related
Health
New blood types are often discovered following medical disasters
New blood types are regularly discovered by an unusual absence or an unusual presence — both of which can result in tragedy.
Neuropsych
How you breathe affects your brain
Your breathing rhythm influences a wide range of behaviors, cognition, and emotion.
Hard Science
200 years of exploring Antarctica
What we’ve learning from the world’s coldest, most forbidding, and most peaceful continent.
Health
COVID, RSV and the flu: A case of viral interference?
Viruses, it turns out, can block one another and take turns to dominate.
Neuropsych
Shopping with your nose: How body odors influence your buying behavior
Sniffing out a deal.
Up Next
The Present
The surveillance technology that will watch us all, all the time
Wide Angle Motion Imagery (WAMI) is a surveillance game-changer. And it’s here.