Imagine opening your eyes for the first time as a brand new baby. The world is so mysterious, full of obstacles and strange shapes. And yet it does not take babies all that long to get their bearings, to latch on to their parents, and to start interacting. How do they do this so quickly? A new study published in Science proposes that babies of mammals dream about the world they are about to enter before being born, developing important skills.

The team, led by professor Michael Crair, who specializes in neuroscience, ophthalmology, and visual science, wanted to understand why when mammals are born, they are already somewhat prepared to interact with the world.

“At eye opening, mammals are capable of pretty sophisticated behavior,” said Craig, “But how do the circuits form that allow us to perceive motion and navigate the world? It turns out we are born capable of many of these behaviors, at least in rudimentary form.”

The scientists observed waves of activity radiating from the retinas of newborn mice before their eyes first open. Imaging shows that soon after birth, this activity disappears. In its place matures a network of neural transmissions that carries visual stimuli to the brain, as explained by a Yale press release. Once it reaches the brain, the information is encoded for storage.

What’s particularly unusual about this neonatal activity is that it demonstrates a pattern that would happen if the animal was moving forward somewhere. As the researchers write in the study, “Spontaneous waves of retinal activity flow in the same pattern as would be produced days later by actual movement through the environment.”

Crair explained that this “dream-like activity” makes sense from an evolutionary standpoint, as it helps the mouse get ready for what will happen to it after it opens its eyes. It allows the animal to “respond immediately to environmental threats,” Crair shared.

Retinal waves in a newborn mouse prepare it for visionwww.youtube.com

What is creating the waves?

The scientists also probed what is responsible for creating the retinal waves that mimic the forward motion. They turned on and off the functionality of starburst amacrine cells — retinal cells that release neurotransmitters — and discovered that blocking them stopped the retinal waves from flowing, which hindered the mouse from developing the ability to react to visual motion upon birth. These cells are also important to an adult mouse, affecting how it reacts to environmental stimuli. 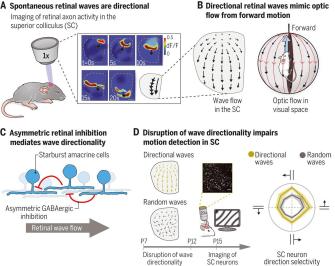 What about human babies?

While the study focused on mice, human babies also seem to be able to identify objects and motion right after birth. This suggests the presence of a similar phenomenon in babies before they are born.

“These brain circuits are self-organized at birth and some of the early teaching is already done,” Crair stated. “It’s like dreaming about what you are going to see before you even open your eyes.”

Tags
animalsneuroscience
In this article
animalsneuroscience
Related
Neuropsych
Inside the brains of aging dogs
In a citizen science project, thousands of pet dogs are helping scientists to understand what happens to memory and cognition in old age.
The Well
Can we condition ourselves to be heroes?
Neuroscientist Robert Sapolsky on the science of temptation, and the limitations of your brain’s frontal cortex.
▸
6 min
—
with
Robert M Sapolsky
Neuropsych
Memory and the benefits of forgetting
Forgetfulness isn’t always a “glitch” in our memories; it can be a tool to help us make sense of the present and plan for the future.
Neuropsych
Asthma drug brings back “lost” memories
In a study involving mice, scientists used two different techniques — one optogenetic and one pharmacologic — to recover “lost” memories.
Life
Our antidepressant drugs are affecting animals and ecosystems
A toxicologist explains the impacts of antidepressants on fish — and no, they’re not getting any happier.
Up Next
The Future
“Acoustic tweezers” use sound waves to levitate bits of matter
The non-contact technique could someday be used to lift much heavier objects — maybe even humans.