Cheetahs are the fastest land animal, the mantis shrimp has four times as many color receptors as humans, and tortoises can live for hundreds of years. But humans? Sure, we’re the most intelligent creatures out there, but we’re pathetically squishy compared to some of the other animals on the planet. Wouldn’t it be nice to have some of these borderline superpowers that other animals have? Maybe flight, infrared-vision, being able to swim underwater?

Well, it turns out we do have another quality that surpasses all other creatures on Earth. Humans are the best endurance runners out there.

Some of you will instantly cry, “But what about horses!?” Horses may be faster than humans, but they can’t outlast them. In a standard marathon (about 26 miles or 42 kilometers), humans regularly beat horses, although the horses tend to win most of the time. But the marathon is an arbitrary distance. Humans can go way longer without stopping.

For the Tarahumara, an indigenous tribe from Central America, running 200 miles over the course of several days without stopping to rest is par for the course. They call themselves the Rarámrui, or “those who run fast.” They smoke cigarettes, drink Coca-Cola and cactus moonshine, wear sandals, and still run like they were born for it. Because they were. A Tarahumara woman runs in the “Ultra maraton de los Canones 2017,” a 100 km race in a Mexican mountain range.

What’s so special about humans

We’re able to run so far because of another uniquely human feature — albeit one decidedly ickier and less cool than being able to run very far. We sweat in an entirely unique way. We’ve got between two and four million sweat glands on our bodies. Compared to other animals, our freakish absence of fur makes the evaporation of that sweat an excellent way to cool down. Other animals — notably horses — also sweat, but their sweat is composed of different materials, and they don’t sweat anywhere near the amount humans do. It’s our main way to cool down, and it works like a charm.

Researchers theorize that early humans capitalized on their sweatiness and endurance to engage in persistence hunting. Before we had spears and arrows to hunt from afar, we used to simply chase animals down until they collapsed and died. Early humans likely targeted animals during the hottest part of the day. On account of our superior cooling system, we could chase animals on and on, never allowing them to stop to pant — which is the typical cooling system found in most other mammals. Eventually, the prey would collapse, and our disgustingly stinky ancestor could grab a meal.

Our tendons also give us an edge when racing over long distances. Human tendons are arranged in such a way that they store energy like springs. In particular, our Achilles tendon appears to be much of the work in conserving energy between steps. Our springy legs also end in a relatively thick butt, which provides support for our torso as we run through the savannah or the forest in pursuit of prey. 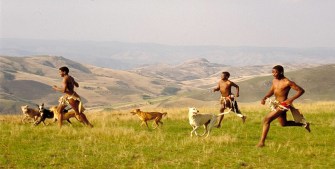 Early humans likely engaged in persistence hunting to catch prey. In this image, members of the Zulu tribe run with African dogs, although for fun rather than for food.

Like other animals, we have a fluid-filled portion in our ears called the semi-circular canal. The movement of the fluid inside helps animals detect acceleration and keep a sense of balance. Humans have an unusually large semi-circular canal compared to others, which ultimately helps us keep track of all that bouncing and bounding around we do when running long distance.

There’s a psychological component, too. The “runner’s high” is a well-known phenomenon, although its precise nature is still a little unclear. Researchers contend that it’s a combination of the natural satisfaction of having accomplished a goal and the release of dopamine and endorphins, which together produce a sense of euphoria and dampen the pain associated with running. As a result, we’re both motivated to run and feel less of the hurt from essentially kicking the ground over and over.

Between our freakishly fur-less bodies, our bizarrely complicated legs, and our masochistic brains, humans are veritable running machines. So, pull out your dusty sneakers from their closet and lace up; it’s what you were born to do.

Drugs that stifle acute inflammation may prevent the body from healing properly.
Up Next
Strange Maps

Meanwhile, Spaniards are the least likely to say their culture is superior to others.