On September 11th, 2001, two planes struck the twin towers of the World Trade Center, killing nearly 3,000 people. Nearly 500 miles away, New England Aquarium scientist Rosalind Rolland was studying the fecal matter of whales in the Bay of Fundy when she and her team got word. Distraught, Rolland and her team decided to continue on with their work because the bay was, as she told the Associated Press, “calming for the soul.”

On 9/11, and the days following, Rolland expressed that there was no place quite the open waters. “It’s like our cathedral,” she said. “It’s a beautiful place.”

For Rolland and other whale researchers, that traumatic day turned out to be something of a research opportunity. Nearly all commercial shipping was halted on September 11th and the few days following, enabling researchers to observe whales in an environment that they almost never experience anymore — a quiet, (nearly) human-free one. 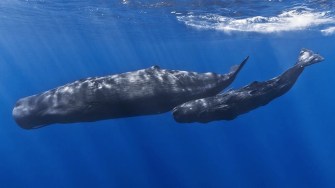 A sperm whale and her calf. Photo credit: Inf-Lite Teacher via Flickr

Indeed, despite being a horrific tragedy, 9/11 did provide the researchers to study creatures whose nature makes them incredibly difficult to study. Whales’ massive size makes more traditional methods of study — such as sedating and capturing an animal — not feasible. The logistical challenges associated with studying whales are considerable, but they’re also extremely dangerous creatures, too.

As an example, Joe Howlett, the co-founder of the Compobello Whale Rescue Team, was rescuing an entangled North Atlantic right whale in 2017. After freeing the whale, Howlett was hit by the gargantuan creature’s tail with a ton of force and died instantly. This likely wasn’t intentional; whales are just too big to safely interact with.

Rolland and her team, amid the shipless waters, began collecting whale fecal matter, one of the few reliable ways to study whales. As it turns out, there’s quite a lot you can tell about a whale from the poo — their diet, the kinds of hormones going through a whale’s body, etc. One of these hormones, glucocorticoids, was conspicuously low in the fecal matter of whales on 9/11 and the few days after. This hormone is most commonly associated with stress in whales.

Other researchers in the Bay of Fundy at that time were recording the low-frequency sounds produced by whale songs. Thing is, these frequencies are also produced by the propellers and engines of ships. With the halt of nearly all commercial shipping, the oceans were quiet in a way that they hadn’t been for centuries. The researchers contend that the constant barrage of sound from ships crossing the oceans is extraordinarily unpleasant for whales. Judging from the amounts of glucocorticoids in their fecal matter, whales are almost constantly on edge.

It’s not just whales who are affected, either. In frequently-used shipping lanes, the noisiest parts of the ocean, dolphins have resorted to making simpler, less-communicative calls in an effort to be heard. Just like you can’t have a conversation during a rock concert, dolphins are losing their ability to convey complex information with their calls. For many species of whales as well, noise from nearby ships can mask up to 80 percent of their communication. 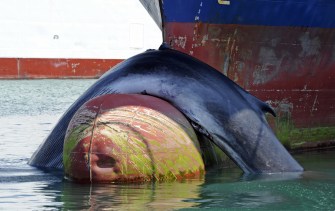 This whale collided with the cargo boat Mont Ventoux in transit between France and Tunisia and was discovered dead, hooked on the bow of the ship, upon the arrival of the ship in the Seaport of Marseille. Photo credit: BORIS HORVAT/AFP/GettyImages

Both loud and deadly

Not only do ships produce a hell of a lot of noise, their fishing lines, nets, and ropes can do some serious damage. Entanglement is the leading cause of death for North Atlantic right whales, and entangled whales exhibit significantly higher levels of stress hormones than non-entangled ones (I would also probably be stressed out if I was entangled in fishing line).

In fact, the leading cause of whale death is due to human interaction, which includes entanglement and being struck by ships. Ship impacts are actually extremely common. One would think that getting out of the way of a ship would be relatively easy, or that whales are intelligent enough creatures to know that they can’t afford to be struck by a large moving object like a ship. While whales are extremely intelligent, they don’t dodge out of the way of moving ships like one would think. Instead, they tend to slowly sink away — often, however, too slowly. The reason isn’t clear, but it’s hypothesized that, being the largest animals on the planet, whales have simply never evolved an inherent understanding that they need to avoid some things. Instead, it’s up to humans to take the lead in avoiding collisions.

Even though whales are unique creatures crucial to the ocean’s ecosystem, it’s obviously not feasible for humanity to cease all shipping activity. Between their mammoth sizes and humanity’s increasing presence in their environment, a conundrum has evolved: the ocean may not be big enough for the two of us.

Tags
animalsanthropocenebiologyconservationmarine biologyoceans
In this article
animalsanthropocenebiologyconservationmarine biologyoceans
Related
Life
Our antidepressant drugs are affecting animals and ecosystems
A toxicologist explains the impacts of antidepressants on fish — and no, they’re not getting any happier.
Thinking
Visual thinking: How to understand the inner lives of animals
Humans are good visual thinkers, too, but we tend to privilege verbal thinking.
Life
Scientists use CRISPR to insert an alligator gene into a catfish
Disease kills off 40% of farmed catfish. This gene protects them.
Hard Science
200 years of exploring Antarctica
What we’ve learning from the world’s coldest, most forbidding, and most peaceful continent.
Strange Maps
The great European house cat migration
Ancient bones reveal that domesticated felines were at home in Pre-Neolithic Poland around 8,000 years ago.
Up Next
The Present
Man arrested in connection with attempted bombings
The suspect is reportedly a 56-year-old man with a criminal history who was driving a white van covered in pro-Trump stickers and other right-leaning decals.