About 66 million years ago, a massive asteroid slammed into present-day Chicxulub, Mexico, triggering the extinction of dinosaurs. Scientists estimate the impact killed 75 percent of life on Earth. But what’s remained more mysterious is how the event shaped the future of plant life, specifically tropical rainforests.

A new study published in Science explores how the so-called bolide impact at the end of the Cretaceous period paved the way for the evolution of our modern rainforests, the most diverse terrestrial ecosystems on Earth.

All samples dated back to the Cretaceous-Paleogene boundary, some 70 million to 56 million years ago. Back then, the region’s climate was mostly humid and hot, as it is today. However, the composition and structure of forests were quite different before the impact, according to the study results. 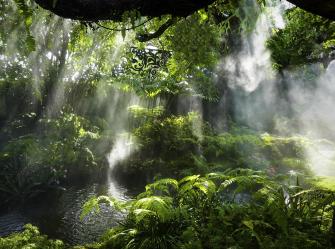 For one, the region’s rainforests used to have a roughly equal mix of angiosperms (shrubs and flowering trees) and plants like conifers and ferns. The rainforests also had a more open canopy structure, which allowed more light to reach the forest floor and meant that plants faced less competition for light.

What changed after the asteroid hit? The results suggest the impact and its aftermath led to a 45 percent decrease in plant diversity, a loss from which the region took about 6 million years to recover. But different plants came to replace the old ones, with an increasing proportion of flowering plants sprouting up over the millennia.

“A single historical accident changed the ecological and evolutionary trajectory of tropical rainforests,” Carlos Jaramillo, study author and paleopalynologist at the Smithsonian Tropical Research Institute in Panama City, told Science News. “The forests that we have today are really the by-product of what happened 66 million years ago.”

Today’s rainforests are significantly more biodiverse than they were 66 million years ago. One potential reason is that the more densely packed canopy structure of the post-impact era increased competition among plants, “leading to the vertical complexity seen in modern rainforests,” the researchers wrote.

The extinction of long-necked, leaf-eating dinosaurs probably helped maintain this closed-canopy structure. Also boosting biodiversity was ash from the impact, which effectively fertilized the soil by adding more phosphorus. This likely benefited flowering plants over the conifers and ferns of the pre-impact era.

In addition to unraveling some of the mysteries about the origins of South America’s lush biodiversity, the findings highlight how, even though life finds a way to recover from catastrophe, it can take a long time.

Most “irrecoverable carbon” is concentrated in these tiny bits of the Earth’s land mass. Can we keep it there?
Hard Science

From hellishly hot planets to water worlds, some distant planets are like nothing in our Solar System.
Up Next
The Present