A team of marine biologists has discovered 16 species of “ultra-black” fish that absorb more than 99% of the light that hits their skin, making them virtually invisible to other deep-sea fish.

The researchers, who published their findings Thursday in Current Biology, caught the species after dropping nets more than 200 meters deep near California’s Monterey Bay. At those depths, sunlight fizzles out. That’s one reason why many deep-sea species have evolved the ability to illuminate the dark waters through bioluminescence.

But what if deep-sea fish don’t want to be spotted? To counter bioluminescence, some species have evolved ultra-black skin that’s exceptionally good at absorbing light. Only a few other species are known to possess this strange trait, including birds of paradise and some spiders and butterflies. 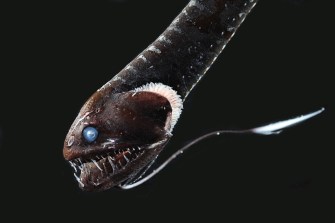 When researchers first saw the deep-sea species, it wasn’t immediately obvious that their skin was ultra-black. Then, marine biologist Karen Osborn, a co-author on the new paper, noticed something strange about the photos she took of the fish.

“I had tried to take pictures of deep-sea fish before and got nothing but these really horrible pictures, where you can’t see any detail,” Osborn told Wired. “How is it that I can shine two strobe lights at them and all that light just disappears?”

After examining samples of fish skin under the microscope, the researchers discovered that the fish skin contains a layer of organelles called melanosomes, which contain melanin, the same pigment that gives color to human skin and hair. This layer of melanosomes absorbs most of the light that hits them. 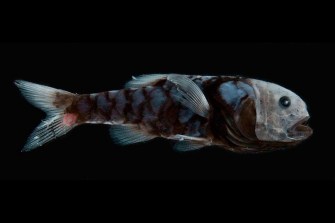 “But what isn’t absorbed side-scatters into the layer, and it’s absorbed by the neighboring pigments that are all packed right up close to it,” Osborn told Wired. “And so what they’ve done is create this super-efficient, very-little-material system where they can basically build a light trap with just the pigment particles and nothing else.”

The result? Strange and terrifying deep-sea species, like the crested bigscale, fangtooth, and Pacific blackdragon, all of which appear in the deep sea as barely more than faint silhouettes. 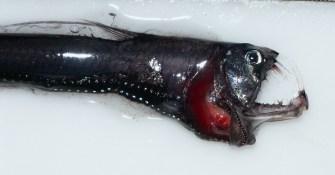 But interestingly, this unique disappearing trick wasn’t passed on to these species by a common ancestor. Rather, they each developed it independently. As such, the different species use their ultra-blackness for different purposes. For example, the threadfin dragonfish only has ultra-black skin during its adolescent years, when it’s rather defenseless, as Wired notes.

Given that these newly described species are just ones that this team found off the coast of California, there are likely many more, and possibly much darker, ultra-black fish swimming in the deep ocean.

The word “turkey” can refer to everything from the bird itself to a populous Eurasian country to movie flops.
Up Next
Hard Science

Closest images ever taken of the sun reveal “nanoflares”

The Sun, as its never been seen before.