Looking at the Sun isn’t easy. If you do it by yourself, you’ll get eye damage. If you do it with highly specialized scientific equipment on Earth, you’ll notice the atmosphere getting in the way. For the best results, you have to look from space. This precisely what the European Space Agency did with their Solar Orbiter (SoIO) spacecraft, allowing us to get close-up pictures of the Sun that highlight every blemish and sunspot.

Situated 77,000,000 kilometers (48,000,000 miles) from Earth, roughly halfway to the Sun, the Solar Orbiter’s cameras have taken high-quality images from a closer vantage point than any camera ever. More importantly, they can take pictures in ultraviolet light, which is highly filtered by Earth’s atmosphere and challenging to do as well without being in space.

The images, seen below, are stunning. 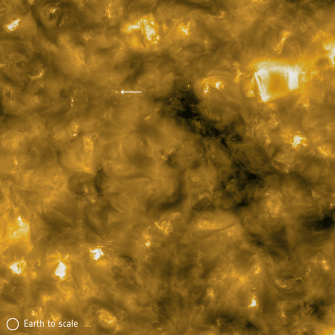 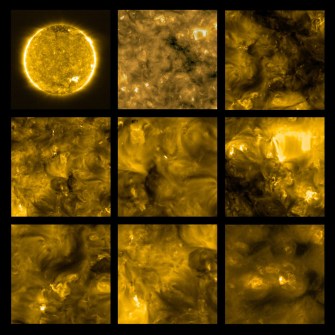 ​These images show the sun’s appearance at a wavelength of 17 nanometers, which is in the extreme ultraviolet region of the electromagnetic spectrum. Images at this wavelength reveal the upper atmosphere of the sun, the corona, with a temperature of around one million degrees. (quoted from https://phys.org/news/2020-07-close-ups-sun.html)Credit: Solar Orbiter/EUI Team (ESA & NASA); CSL, IAS, MPS, PMOD/WRC, ROB, UCL/MSSL

They also help to answer a few questions about how the Sun works while raising new ones as the mission continues.

If you look at some of these images, the top image with an arrow stands out; you will notice small white smears. These are nanoflares, also called “campfires.” They are 700-kilometer-wide relatives of solar flares burning at temperatures of one million degrees, nearly 200 times hotter than the photosphere below them. One hypothesis maintains that a vast number of these could be part of the mechanism that keeps the corona, the Sun’s outer atmosphere, hotter than its surface.

“The Sun has a relatively cool surface of about 5,500 degrees and is surrounded by a super-hot atmosphere of more than a million degrees. […]There’s a theory put forward by the great US physicist Eugene Parker, who conjectured that if you should have a vast number of tiny flares this might account for an omnipresent heating mechanism that could make the corona hot.”

While larger nanoflares can be seen from Earth, the images this spacecraft provided suggest they can be smaller than previously known and arise more frequently than supposed. At this moment, scientists aren’t sure why they exist or what mechanisms they interact with.

All of these images are from tests to see how the equipment operates in outer space. The probe’s primary mission will take place when it reaches a point a mere 48,000,000 kilometers from the Sun. Those future pictures and data will be all the more impressive, as the Sun is currently moving out of a quiet phase and will be more active.

However, it’ll take two years to get into position, so we have plenty of time to get acquainted with the images it has already shared.

Tags
cosmosrocket sciencespacesun
In this article
cosmosrocket sciencespacesun
Related
Life
“I went to space and discovered an enormous lie”
What astronaut Ron Garan saw in space changed his life forever – here’s what it taught him.
▸
8 min
—
with
Ron Garan
Videos
The true story behind Carl Sagan’s cult classic, Contact
Do aliens dream about meeting us, too?
▸
with
Jill Tarter
Videos
NASA astronaut explains humanity’s trajectory to Mars
The first human that isn’t an Earthling could be in our lifetime.
▸
5 min
—
with
Robert Curbeam
How Earth’s 23.4° tilt makes life beautiful
Rituals come as much from religion as they do from the way Earth spins around the Sun.
▸
4 min
—
with
Sasha Sagan
Videos
Michio Kaku: “We need a second planet”
Humans won’t survive if we stay on Earth. Michio Kaku explains.
▸
7 min
—
with
Michio Kaku
Up Next
The Present
Google to fund 100,000 online certificate scholarships
The Silicon Valley titan has promised scholarships for its tech-focused certificate courses alongside $10 million in job training grants.