People who enjoy travel have seen this trend becoming more and more pronounced even in human populations: There’s an increasing homogeneity among our cultures, a loss of local identity as we increasingly eat the same foods, watch the same movies, and covet the same gizmos. A similar thing is occurring to chimpanzees, but it’s even more fundamental. The culprit, though, is the same: Us.

At least we (sort of) intend to be doing it to ourselves — our primate cousins are losing their tapestry of cultures through no fault of their own.

It took some time for field studies of African chimpanzees to mature to the point that a pattern became clear, but by 1999, and a cumulative 151 years of observation, researchers — including Jane Goodall — published compelling evidence that chimpanzee communities develop their own local cultures.

The paper reported: “We find that 39 different behavior patterns, including tool usage, grooming and courtship behaviors, are customary or habitual in some communities but are absent in others where ecological explanations have been discounted.”

The idea was not immediately accepted, but by now, a substantial amount of evidence exists of cultures across a range of species. Humpback whales in the Gulf of Maine have taken up “lobtail feeding.” A hot trend spreading through the capuchin world is poking each others’ eyes. Some orangutans say goodnight by blowing a raspberry. Chimp culture is no longer in dispute.

The irony, of course, is that it’s now disappearing thanks to human encroachment. As Ammie Kalan, of the Max Planck Institute for Evolutionary Anthropology and co-author of a new study examining this trend, tells The Atlantic, “It’s amazing to think that just 60 years ago, we knew next to nothing of the behavior of our sister species in the wild. But now, just as we are truly getting to know our primate cousins, the actions of humans are closing the window on all we have discovered.” 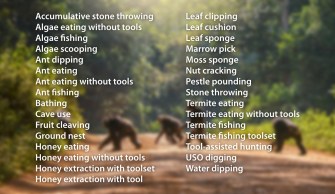 Chimpanzee behavior diversity has been “documented in a variety of contexts,” says the study, “including communication, thermoregulation and extractive foraging. Chimpanzees are also proficient tool-users, using sticks, leaves and stones to access honey, insects, meat, nuts and algae.”

Because the observed behaviors are unique to local population groups, they can’t be attributed to instinctive behavior, and it’s believed that, once introduced or invented, “Many of these behaviors are inferred to be socially learned and therefore cultural,” according to the study’s authors. (They don’t completely rule out the possibility that genetic and environmental influences play some part. Still, the presence of these activities occurs “irrespective of resource or tool abundance,” and new behaviors are continually discovered by researchers when observing a new chimpanzee group for the first time. (There’s been ample controlled experimentation that confirms chimps’ ability to learn new things.)

The study’s researchers looked at 31 chimpanzee behaviors that appear in 144 different chimp communities. They observed 46 communities specifically for this study and incorporated existing data from an additional 106 groups, an exceptionally large data set overall.

Top left is the overall reduction of behaviors due to human impact. The remaining graphs show the reduction by type of behavior. Image source: Kalan, et al.

What the paper finds

The data reveals that in chimpanzee communities experiencing significant human impact, the likelihood of local behaviors appearing drops by a stunning 88 percent. The conclusion was inescapable, even though the researchers employed an extremely forgiving standard: If a behavior was observed even once, they recorded it as present — this means our impact might actually be even more extreme than the study reports.

The authors also questioned whether there could possibly be a mistake in the manner in which the data was being analyzed. Unfortunately, that wasn’t the case. “However we divided up the data, we got the same very obvious pattern,” says Kalan, confirming their worst fears for the “disturbance hypothesis” the study was investigating.

The disturbance hypothesis considers that even when chimp populations survive complete decimation, the damage inflicted by human exploitation of their habitat can still be profound “due to resource depletion or a breakdown in opportunities for social learning.” With habitat loss, degradation and fragmentation — also, poaching — communities shrink and are dispersed over long distances, and this reduces “population size, gregariousness and long-distance dispersal, weakening behavioral transmission.”

The study notes that the world population of the great apes is declining 2.5-6 percent a year. On top of that, “Our results suggest that chimpanzee populations are losing their characteristic sets of behavioral traits, and that a number of not yet discovered behaviors may be lost without having ever been described.”

The authors suggest that as we look to do a better job at preserving remaining habitat in the future, we add in a new metric, “culturally significant units.” They conclude “a more integrative approach to conservation is needed,” a standard that “considers behavioral diversity in addition to population size and trends for wildlife management.”

Due to deteriorating health, all Beethoven left behind for his final symphony were some musical sketches.
The Past

In the perilous mountains of Tibet, archaeologists unearthed ancient hand and footprints that seem to be the creative work of children.
The Future

A future kitchen appliance could make it possible to 3D-print entirely new recipes and cook them with lasers.
High Culture

This is a time for family and friends to gather, watch the full moon and eat mooncakes and other delicacies.
Up Next
Thinking

How Taoist philosophy deals with the concept of anxiety

Perpetual worry doesn't have to be your default mindset.