Quantitative linguistics is a field that seeks to unmask mathematical laws that govern speech patterns and rhythms. Its researchers have found that underpinning human languages is what appears to be a universal desire for compression — getting meaning down into the most concise and easily intelligible forms possible.

Two laws in particular have gained wide acceptance: Zipf’s law of abbreviation and Menzerath’s law. A study just published by the Royal Society on February 13 reveals that the gestural language of chimps at play is also based on these two maxims, a finding that implies that these two laws may have a role to play outside human language.

One of the study’s authors, Raphaela Heesen, tells New Scientist, “Primate gestural communication is, of course, very different to human language, but our results show that these two systems are underpinned by the same mathematical principles.”

In fact, the influence of Zipf’s and Menzerath’s laws on the structure of chimp gestures is not even the strangest place it’s been found: They’ve also been seen operating in genetic structures. 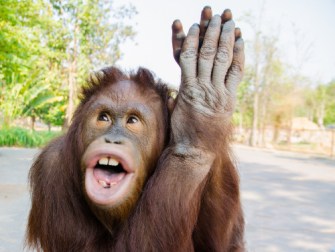 Here’s what the two laws state in respect to language.

If it seems strange that principles of language should also apply to a range of naturally occurring processes, language, after all, is just another one of those. And as the new study says, “Both laws have been linked to compression — the information theoretic principle of minimizing code length.” Any good software engineer knows the efficiency that comes from cleaning up an app’s programming.

The study of chimps’ gestures

For the new study, whose primary investigator is primate expert Stuart Semple, researchers analyzed videos of 58 “social play” gestures used more than 2137 times by chimps living in Uganda’s’ Budongo Forest. “Social play’ was defined as “situations where two or more individuals engaged in play activities indicated by signs of laughter, play-face and typical body actions such as wrestling, chasing, play-biting or tickling.” There are 81 chimps in the Sonso community studied.

Durations of gestures were measured in frames, each lasting 0.04 seconds. The study’s text cites a few of the gestures cataloged: actions such as a head stand, dangle, or roll over, and those that signal the end of play or a change in play such as putting a hand on a playmate. There’s a also a complete list in the study’s supplemental materials.

Taken all together, the law of abbreviation wasn’t apparent in the gestures. However once the gestures were grouped into functional categories, its presence was plain. The same type of grouping was necessary to reveal the impact of Menzerath’s law.

It’s not just ostriches who stick their head in the sand.