A pair of forest fires caused radiation levels to spike on Saturday in Ukraine’s Chernobyl Exclusion Zone, the site of the 1986 nuclear disaster.

The flames engulfed about 250 acres within the 1,000-square-mile exclusion zone, causing radiation levels to rise up to 16 times above normal. On Facebook, Ukraine’s head of ecological inspection service, Yegor Firsov, posted a video of a Geiger counter near the fire reading 2.3 microsievert per hour (μSv/h), which is a measurement of ambient radiation. The exclusion zone normally shows ambient radiation of about 0.14 μSv/h, which is above the maximum safe level for humans of 0.5 μSv/h.

“There is bad news — at the center of the fire radiation above normal,” Firsov wrote.

Fortunately, there was no indication that radioactive particles had floated to Ukraine’s capital Kyiv, located just 60 miles from the exclusion zone.

Ukrainian officials dispatched more than 100 firefighters, two An-32P planes and an Mi-8 helicopter to battle the flames near the village of Vladimirovka. The fires were started by a 27-year-old man who wanted to burn grass “for fun,” according to The Associated Press.

Firsov called on Ukraine to increase penalties for grass arson by a magnitude of 50 to 100.

“This barbaric needs to finally be stopped,” he wrote. “At the first meeting of parliament, deputies should significantly raise penalties for grass arson.”

Why fires are especially dangerous in irradiated sites

Forest fires are a major health risk for those living near the exclusion zone. That’s because some of the soil, plants, and trees in the zone are radioactively contaminated, and fires can kick up radioactive particles into the air, where wind could carry them outside of the exclusion zone.

A 1996 study published in Science of The Total Environment described the health risks:

“If the elements were radioactive isotopes, such [cesium, iodine, and chlorine], fires could cause an increased radiological dose to people through inhalation, exposure to ash, or ingestion of plants because of increased uptake of ash leachate.” 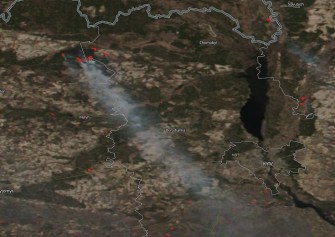 On April 05, 2020, NOAA-NASA’s Suomi NPP satellite captured this image of the human caused wildfire that broke out near the Chernobyl Nuclear Power Plant in Ukraine.

Forest fires are especially dangerous when they occur in areas like the Red Forest, a 4-square-mile pine forest surrounding the nuclear power plant. Shortly after the meltdown, the trees turned reddish brown and died, hence the name. The Red Forest has suffered forest fires as recently as 2018, and today it remains one of the most radioactively contaminated places in the world.

Some scientists have been warning that rising temperatures and drier conditions may increase the risk of forest fires in areas like this.

“This dead organic matter on the surface of the soil is highly radioactive,” Chernobyl research Dr. Timothy Mousseau told Radio Free Europe. “When it dries out, it becomes a big fire hazard and this fuel load is what generates catastrophic forest fires.”

A binary white dwarf in a tight, super-fast rotation looks to be pumping out gravitational waves.