This just-announced grain spirit is called “ATOMIK,” an excellent name given its source. It’s made from water and rye from the Chernobyl exclusion zone in the Ukraine. This is an area surrounding the ill-fated nuclear plant that’s considered so radioactive that no one is supposed to live there. It’s currently a wildlife refuge in which visible mutations are less common than one might expect. Environmental scientist Jim Smith of the University of Portsmouth and his colleagues are making a statement by introducing their beverage: Some areas we’ve ruined can recover given enough time. The same point could be made for the effect of climate change — eventually, the Earth will survive. It’s less clear that we will. 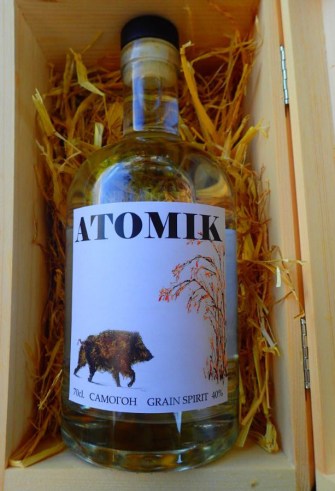 There’s only one bottle of ATOMIK so far, but the company producing it, Chernobyl Spirits Company, expects to distill 500 of them by the end of the year. The liquor is said to have a fruity taste and work well in a martini. As a grain spirit, ATOMIK is a bit more flavorful than commercially produced vodka. The company is shooting for a more refined version of samagon, a homemade vodka brewed since the 12th century in the villages of Ukraine, Belarus, Poland, and Russia, using either potatoes or grains. 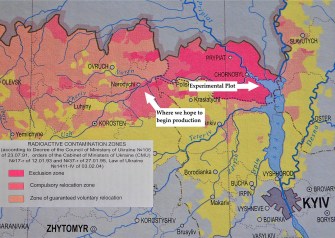 The Chernobyl disaster threw into the air upwards of 100 radioactive elements. Some of it, such as highly carcinogenic iodine-131, has a short half-life, and is long gone. Other dangerous isotopes last for far longer and are still present. Strontium-90 and cesium-137 have just about reached their half life date, and so remain at about 50% potency. Others, like plutonium-239, with a half life of 24,000 years, aren’t going anywhere.

Still, swaths of the exclusion zone are much like anywhere else, at least in terms of radioactivity — their plants and animals may still contain genetic surprises. As Smith teold IFL Science, “Natural radiation worldwide varies — if you’re living at high altitudes, you get more cosmic radiation. For most of the exclusion zone, the doses that you would get living there are within that range of variability of radiation doses worldwide.” Some areas immediately around the ex-power plant remain uninhabitable. The “Red Forest” is still unsuitable for a picnic, for example.

The water in ATOMIK is mineral water from a deep aquifer about 10 km south of Chernobyl which the company believes is located too far down to have become contaminated: “We’re currently trying to work out exactly how many thousands of years old this water is, but it definitely wasn’t anywhere near the surface in 1986.” They describe it as being pure and of high quality, similar to the waters of the limestone aquifer beneath the Champagne region in France, as well as the south of England.

The rye in ATOMIK was harvested from the main exclusion zone and was tested for the presence of radiocaesium. The isotope was present in levels well below the conservative Urainium maximum. The levels of radiostrontium, however, exceeded the legal limit. Nonetheless, when the final grain spirit was tested, no radioactivity at all was found in the beverage.

Some current residents of the Chernobyl exclusion zone

Chernobyl Sprits company has a larger message than simply creating a provocative new refreshment. The want authorities to reconsider the exclusion zone now that so much time has passed since the Chernobyl meltdown:

More than thirty years after the accident, we believe that what these areas need most is economic development and management of the unique wildlife resource the abandoned areas represent.