Researchers have made significant progress in figuring out the purpose of the 70 mysterious circular structures made of mammoth bones. These Ice Age curiosities were found in Ukraine and the west Russian Plain. A new study shows one of site’s bones to be over 20,000 years old, making it the oldest such structure in the region.

The majority of the bones belonged to mammoths and came from animal graveyards during the last ice age, which lasted in Northern Europe from 75,000 to 18,000 years ago. At the Russian Plains site Kostenki 11, outside the modern village of Kostenki (500km south of Moscow), the researchers had a well-preserved example of this type of circle, as it was built around the coldest part of this ice age, which according to the press release from the University of Exeter, was from around 23,000 to 18,000 years ago. The bitter cold is probably the reason the bone circles were eventually abandoned.

At the Kostenki site, the scientists located 51 lower jaws and 64 mammoth skulls, which were used to create the walls of a 30 foot by 30 foot structure. They were also located throughout the interior.

Besides the mammoths, some bones from horses, bears, reindeer, wolves, red and arctic foxes were also uncovered by archaeologists from the University of Exeter, who carried out the study.

Over time, the circle became hidden by sediment, about a foot below the surface. What was remarkable in the current find by the archaeologists is that for the first time they discovered among the bone circles some charred wood and remains of non-wooden plants. This tells us that people who lived there were using wood and bones for fuel and foraged for plants to be utilized for food, medicine and fabric. The charred seeds also spotted at the location were likely employed for cooking and eating. 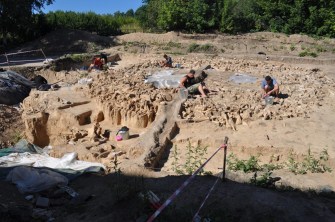 Kostenki 11 site in the Russian Plains.

The study was led by Dr. Alexander Pryor who called the site Kostenki 11 a “rare example” of how Paleolithic hunter-gatherers lived in a pretty unforgiving environment. He thinks mammoths and humans were probably both drawn to the site by a natural spring that would not freeze during winter.

“These finds shed new light on the purpose of these mysterious sites,” he explained. “Archaeology is showing us more about how our ancestors survived in this desperately cold and hostile environment at the climax of the last ice age. Most other places at similar latitudes in Europe had been abandoned by this time, but these groups had managed to adapt to find food, shelter and water.”

The previous theory about the purpose of the circles pegged them as dwellings, occupied for months. The new evidence shows that there wasn’t enough intense activity at the Kostenki site to indicate such long-term events.

Tags
animalsarchaeologybiologycultureEuropehistoryrussia
In this article
animalsarchaeologybiologycultureEuropehistoryrussia
Related
Life
Our antidepressant drugs are affecting animals and ecosystems
A toxicologist explains the impacts of antidepressants on fish — and no, they’re not getting any happier.
The Past
Ancient migration: Bering Strait land bridge from Asia to North America was not a one-way road
Ancient humans crossed the Bering Strait land bridge from Asia into North America. But some of them went back.
High Culture
Did Paul Cézanne hide an early self-portrait underneath a 160-year-old still life?
To answer that question, we may have to figure out when the famed painter started to go bald.
Strange Maps
Dutch government releases a genuine treasure map from WWII, sparking a hunt for the loot
X marks the spot. The Dutch town of Ommeren has been swamped by detectorists armed with shovels looking for $20-million treasure.
Thinking
Creative wisdom from Rick Rubin: embrace your inner gatekeeper
Unlock the full potential of your creativity with holistic detachment. This is the way of the editor.
Up Next
The Present
Study: Lifestyles of the wealthy are to blame for climate change
As it turns out, people who can afford to fly all the time use more energy than anybody else.