Cats may rule the internet, but spiders dominate our nightmares. That’s the consensus of a group of psychologists in the Czech Republic. In a new study, published in The Journal of Psychology on June 11, a team at the National Institute of Mental Health and Charles University showed volunteers 25 different animal images to gauge their fear and disgust.

Spiders were the clear winner (cats, side note, were at the extreme opposite end of the scale). The team, led by Jakub Polák, surveyed 2,291 volunteers from a Facebook group comprised of Czech and Slovakian volunteers to better understand animal phobias. They grouped the images in five clusters:

Animal phobias, the team writes, comprise some of our most severe mental phobias. They point out that the horror film industry has exploited this fact, with over 8,000 titles released in 2017 alone, many of which involve some sort of animal trigger. Fear is one of those odd drivers of human imagination. The rush of adrenaline and cortisol, even when evoked by existentially terrifying stimuli, remains addictive.

Though we’ve separated ourselves from much of nature, innate biological instincts are an integral part of our biological operating system. Millions of years of commingling with numerous animal species, many of which are deadly to us, have instilled in our nervous systems quite reactive responses. The primary driver of this study: finding out which animals we instinctively recoil from. 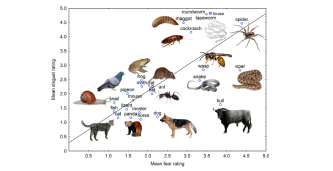 Fear is immediately recognizable in the bigger species that could, if given the opportunity, easily maim and kill us: crocodiles, bears, lions, tigers, snakes. More intriguing are creepy-crawlies that are more likely to murder us with venomous bites and scratches, such as parasites and snakes, or infect us with a plague, such as rats and mice.

These latter groups invoke an even deeper fear in us. Respondents showed that while fear of an attack from large game is warranted, critters closer to our everyday reality trigger mortal anxiety: infectious pathogens are more realistic than a bear attack. They write,

“It is thus disgust, rather than fear, that is the primordial negative emotion involved in aversion to animals, particularly the smaller ones.”

Disgust is not limited to insects. Our olfactory sense is primed for it as well. Scrunching our noses at the scent of spoiled milk or rotten food, another harbinger of pathogens, remains an important avoidance technique for sickness.

Yet there’s something even more primal about diseases that crawl. (“Maggots, Michael, you’re eating maggots. How do they taste?“) The researchers discovered that the fear of predatory mammals does not spur disgust, while snakes, spiders, and parasites evoke both emotions.

In fact, many of us are fascinated by the stealth lion or (seemingly) clumsy bear. In the ’80s I loved my giant Rick Raccoon stuffed animal (and the cartoon that inspired it), yet when a rabid raccoon once tried to break into my apartment by gnawing on the metal grating on my deck door, the Hanna-Barbera charms were nowhere in sight. No disgust, but plenty of fear.

Interestingly, the one control animal in the study, a red panda, was ranked higher in fear than cats. There’s something to be said about billions of feline photos and videos housed online, even if those little predators hijack our brains. As the owner-servant of three, it’s part of the price we pay for our fascination.

In the end, the researchers found that only a few animals elicited both fear and disgust. On the fearful end sit vipers, wasps, snakes, and bulls, while the most repulsive animals include roundworms, tapeworms, maggots, louse, and cockroaches. The animal perfectly situated in the middle of fear and disgust? Spiders.

“Expectedly, the spider and venomous snake (viper), but not a harmless snake (grass snake), were the most feared animals by the majority of respondents in our study. Nearly 19 percent of subjects reported extreme fear or terror when exposed to the spider picture and 10 percent of subjects gave the highest fear score to the viper picture. This confirms the general agreement in the literature that snakes and spiders are the most intensively feared animals in humans with the highest prevalence in the general population.”

Sorry, Charlotte, Wilbur might be your friend, but Fern is scared — and repulsed — by you. It’s not her fault: it’s in her genes.

Whether or not life exists elsewhere in the Universe, we can be assured of one thing: We are the only human beings in the cosmos.
Up Next
Human Resources

You know it. Your employees know it. They’re likely to stay with your company only for just a short while. Two years, four years, seven years max. Yet you both […]