Five thousand and seven hundred years ago, “Lola” — a blue-eyed woman with dark skin and hair — was chewing on a piece of pitch derived from heating birch bark. Then, this woman spit her chewing gum out into the mud on an island in Denmark that we call Syltholm today, where it was unearthed by archaeologists thousands of years later. A genetic analysis of the chewing gum has provided us with a wealth of information on this nearly six-thousand-year-old Violet Beauregarde.

This represents the first time that the human genome has been extracted from material such as this. “It is amazing to have gotten a complete ancient human genome from anything other than bone,” said lead researcher Hannes Schroeder in a statement.

“What is more,” he added, “we also retrieved DNA from oral microbes and several important human pathogens, which makes this a very valuable source of ancient DNA, especially for time periods where we have no human remains.”

The birch pitch was found on the island of Lolland (the inspiration for Lola’s name) at a site called Syltholm. “Syltholm is completely unique,” said Theis Jensen, who worked on the study for his PhD. “Almost everything is sealed in mud, which means that the preservation of organic remains is absolutely phenomenal.

“It is the biggest Stone Age site in Denmark and the archaeological finds suggest that the people who occupied the site were heavily exploiting wild resources well into the Neolithic, which is the period when farming and domesticated animals were first introduced into southern Scandinavia.”

Since Lola’s genome doesn’t show any of the markers associated with the agricultural populations that had begun to appear in this region around her time, she provides evidence for a growing idea that hunter-gatherers persisted alongside agricultural communities in northern Europe longer than previously thought.

Her genome supports additional theories on northern European peoples. For example, her dark skin bolsters the idea that northern populations only recently acquired their light-skinned adaptation to the low sunlight in the winter months. She was also lactose intolerant, which researchers believe was the norm for most humans prior to the agricultural revolution. Most mammals lose their tolerance for lactose once they’ve weaned off of their mother’s milk, but once humans began keeping cows, goats, and other dairy animals, their tolerance for lactose persisted into adulthood. As a descendent of hunter-gatherers, Lola wouldn’t have needed this adaptation. 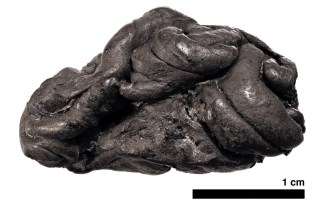 Whatever their reasons, chewed and discarded pieces of birch pitch offer us the mind-boggling option of learning what someone several thousands of years ago ate for lunch, or what the color of their hair was, their health, where their ancestors came from, and more. It’s an unlikely treasure trove of information to be found in a mere piece of gum.

For the third time in U.S. history, the House of Representatives voted to impeach a sitting U.S. president.