Scientists have been stealing ideas from animals for years. The Shinkansen Bullet Train in Japan for example, was super-fast — 200 mph. But it was also super-noisy until chief engineer and bird-watcher Eiji Nakatsu got the idea that the beak that allows kingfishers to splash-lessly dive into water could also help a train slice more easily through air. One industrial “nose job” later, the bullet train is far quieter and goes 10% faster on 15% less fuel.

There are countless examples of similar “biomimicry.” The velcro on your coat is based on those aggravating burrs that cling to your jeans after a hike. Scientists are developing painless hypodermic needles modeled on mosquito mouths that get your blood out without your even noticing. The bumps, or tubercles, on whale fins may provide the key to more effective wind turbines.

Now experimental philosopher and conceptual artist Jonathon Keats is looking to return the favor with something he calls the “Reciprocal Biomimicry Initiative.” The idea is to leverage human technology for the benefit of animals for a change. Keats is proposing eight pilot projects that seek to mitigate some of the damaging effects our activities have had on animals. The Samek Art Museum at Bucknell University will be hosting an exhibition that presents the Reciprocal Biomimicry Initiative to the public. 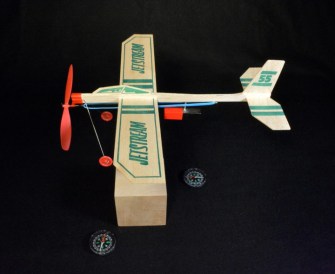 The star attraction, arguably, is GPS for birds. Here’s how it works. Birds use an innate geomagnetic navigation system to travel to and from their breeding grounds around the world — it’s an amazing ability they have. Unfortunately, human activities have damaged many of these places. Keats’ “Electromagnetic Navigational System” — connected to a global climate-sensing network to identify more favorable breeding locations — will fly drones outfitted with strong electromagnets alongside the birds so as to lure them magnetically to the healthier destinations. 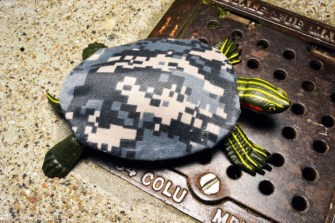 The patterns on their shells are great for blending in when turtles are making their way through natural settings, but not so helpful in a city setting where an increasing number of the reptiles find themselves, their natural habitats having been built-over. Keats is suggesting specially-designed shell coverings boasting urban colors and visual patterns to help them avoid notice. 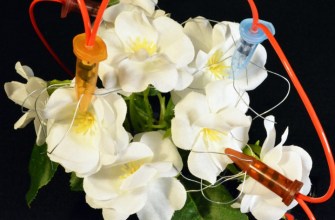 There’s no solution yet for the massive, mysterious bee die-off. It’s scary for us because bees are critical to plant pollination, and that means our food supplies, and thus survival, are under threat. It may be that we’ll need to pollinate them artificially, and Keats proposes tiny battery or solar-powered micro-vibrators to get them in the mood. 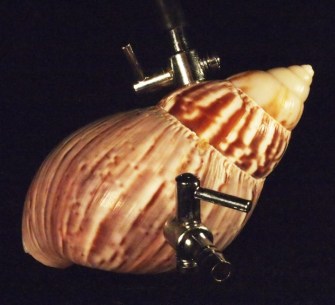 Keats has two ideas in one here. Tiny “aqualungs” could help sea snails get safely onto dry land when acidification makes ocean waters uninhabitable. On the other hand, the same devices could help land snails survive a trip through acid rains to find shelter in the sea. 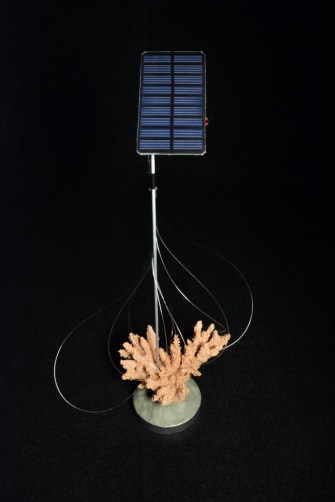 Many of the world’s corals are now struggling to get the sunlight they require through polluted or turgid waters — they depend on energy from photosynthesis to live. The Reciprocal Biomimicry Initiative would bring light down to them via illuminated LED strands connected to photovoltaic cells up at the surface. (In the exhibit, the cells are mounted on poles, but one imagines they could just as easily float.)

It’s worth remembering that the Samek is an art museum, and Keats’ concepts are deliberately thought-provoking in their seeming impracticality. Still, his points are well worth making. The earth doesn’t just belong to humans, and though we’re good at taking ideas from animals, we’re not really doing such a good job returning the favor.

The Reciprocal Biomimicry Initiative exhibit runs at the Samek Art Museum in Pennsylvania from March 4 to June 4, 2017.

Since our arrival, humans have driven a seven-fold drop in the mass of wild land mammals.
Up Next
Hard Science

Creating a race of super soldiers is off the table, too.