How does the rule of law promote a free society?

In classical liberal philosophy, individual pursuit of happiness is made possible by a framework of law.

JAMES STONER: What is the rule of law? Well, the rule of law has been defined in different ways. I think although the phrase was made popular in classical liberalism it actually has a pre-history. So Aristotle, the Greek philosopher, spoke about the difference between the rule of law and rule by a wise man. And rule of law for Aristotle had its, as its attraction, that it was seeking justice, and justice requires giving equal things to people who are equal in some respect or giving the same punishments to those who've committed the same crimes. And in that way, law preserves a kind of steadiness to the administration of justice so that for Aristotle speaking of the rule of law without speaking also at justice wouldn't make any sense. In fact, for the Greeks justice was a virtue, it was also something that could be described objectively in a city, but it was first and foremost a virtue in human beings. So, in that way the aim was to have law integrated into a human personality, to have law so imbue a person that he acted justly. Or maybe it's actually the reverse that the law would reflect the justice of a wise man. Actually, that's probably the better way to put it, the law would reflect the justice of a wise man.

Now, Aristotle wrote that it's ordinarily better to be ruled by law than by another human being because there are very few people who are really that wise, not to mention wise and concerned for your good. I like to say to people, at least when you're young there is somebody who's wiser than you and more concerned about your good than you are; that's your mother usually. But outside of that it's rare to find an instance where there's someone wise enough to really rule others, much less a lot of people a whole society, so better to rule by law. And besides, if rule is by a group of people in a republic or what Aristotle called a polity or even in an aristocracy, but certainly in a republic or polity where many rule together, and there can be a kind of wisdom there and there could be a good aim for that, he thought. They can only rule by law; they can't assemble to deal with every single instance, but they can make laws for dealing with most cases most of the time.

All of this supposed that the end of law really mattered. It wasn't just the form of law, a form of words that's general and perspective, but what was the end that they sought, and for the classical political philosophers the end was the common good. All of this gets repeated and in a way ramped up by the medieval political philosophers, particularly Thomas Aquinas in his classic treatment of law for the medievals drawing not only on the Greek philosophers but also on the tradition of the Hebrew scriptures and the importance of the law of God, as given especially in the Ten Commandments, first and foremost in the Ten Commandments and then the other laws that followed from those. Law really explains all order in the universe and all reason in the universe.

Now, the classical liberal conception of law draws upon this sort of ancient classical tradition and the medieval classical and Judeo Christian tradition, but it saw things a little differently. Here there became less of a concern for the end or rather the end was no longer defined as the common good understood as a shared life of virtue lived by the city, but rather the good of each individual. On the supposition that what's good for each of us really varies from person to person and that, again, outside of that qualification of what happens when you're young, which is no small qualification because we're all born as infants and come into the world as infants. But leaving that aside, once we're mature we know what's good for ourselves better on the whole than anyone else could know it and we certainly care a lot more about our own good than most people do for us. Again, that's not quite true because when you're in love it might be the person with whom you're in love who cares more for you in a way than you do for yourself because you lose yourself in that other person. But ordinarily to the classical liberals, classical liberals sort of put love in the background or rather I guess what they say is society isn't going to tell you how to love and whom to love. So all things considered, the best judge of this is you. And that means there's a place for law, but law is now the rules which allow each of us to live out our own lives and pursue the good, pursue happiness in that phrase of John Locke adopted by Thomas Jefferson in the Declaration of Independence, to pursue happiness as we understand it.

And so, the rule of law become those rules, not telling us how to live in the sense of what will make us happy, but how we can live together in such a way that we don't bump into each other too much and in fact that we maybe even sometimes help each other out on the way to our own happiness. 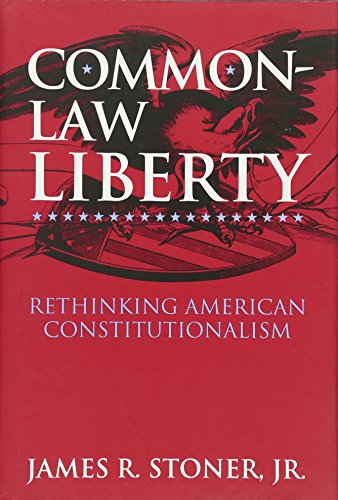