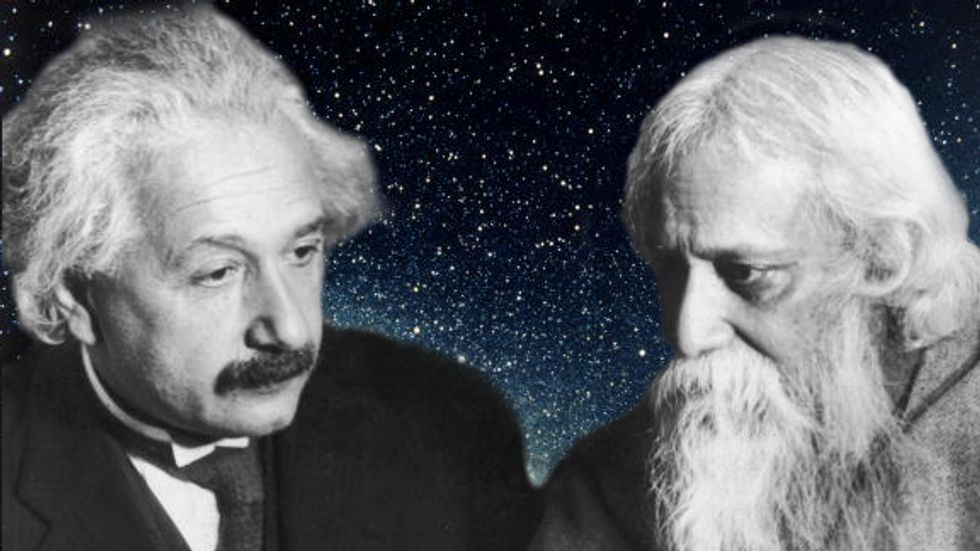 The natures of truth, reality, beauty, and consciousness are the kind of weighty, meaty topics great minds love to discuss. In Germany in 1930, just such a conversation took place between Albert Einstein and Indian philosopher Rabindranath Tagore. Explored in the new book Science and the Indian Tradition: When Einstein Met Tagore, by David L. Gosling, this dialogue wasn't the usual religion vs. science debate you're likely to see on CNN.

Tagore says, “It is a relative world, depending for its relativity upon our consciousness." His entire argument is that beauty and truth are completely dependent on humans observing them, that there is no beauty without an admirer, and no truth without a believer.

Einstein disagrees with the truth aspect, stating that “the Pythagorean theorem in geometry states something that is approximately true, independent of the existence of man. Anyway, if there is a reality independent of man, there is also a Truth relative to this reality; and in the same way the negation of the first engenders a negation of the existence of the latter."

Einstein and Tagore had a genuine curiosity about each other's perspectives, how they complement one another and how they differ.

Einstein believed more in absolute truth than the religious man he was debating, which apparently surprised Einstein as he exclaimed, “Then I am more religious than you are!" Tagore replied, “My religion is in the reconciliation of the Super-personal Man, the universal human spirit, in my own individual being." The whole universe inside you and you inside the universe — it brings to mind the famous Carl Sagan quote: “We are all made of star stuff."

Read the whole conversation between Einstein and Tagore here.

Author Robin Wright explains how "reconciliation is possible" between science and faith.

Einstein and Tagore had a genuine curiosity about each other's perspectives, how they complement one another and how they differ. The respect they have for one another results in a brilliant exchange of ideas. Others have mentioned it recollects how today HH Dalai Lama appreciates scientific inquiry, but for me it goes beyond being about religion in the strictest sense and delves into philosophical and metaphysical musings, including one of Einstein's favorite topics: relativity (albeit, in this case, it has nothing to do with space-time).

I'm inclined to agree with Tagore that truth is relative to man, seeing as the more we know about the world around us the more previous laws and theories are reshaped or disproved (what is scientifically true today may not be true tomorrow). However, I welcome the investigation and the curiosity that drives it. It seems worse to not care about the universe and its apparent laws than to be proven wrong about those laws decades later.

Indeed, as we investigate our inner and outer universes, the more similarities are found. We are made from the very materials that compose our universe. Our actions affect every other person on the planet. We now know we are interconnected in a way Einstein and Tagore couldn't possibly have imagined. And I think that's pretty beautiful — relative to my human perception.

Lori Chandler is a writer and comedian living in Brooklyn, NY. She has been published in The New York Times and on CollegeHumor. You can follow her on Twitter @LilBoodleChild to keep up with her latest pieces, performance dates, and wry observations.