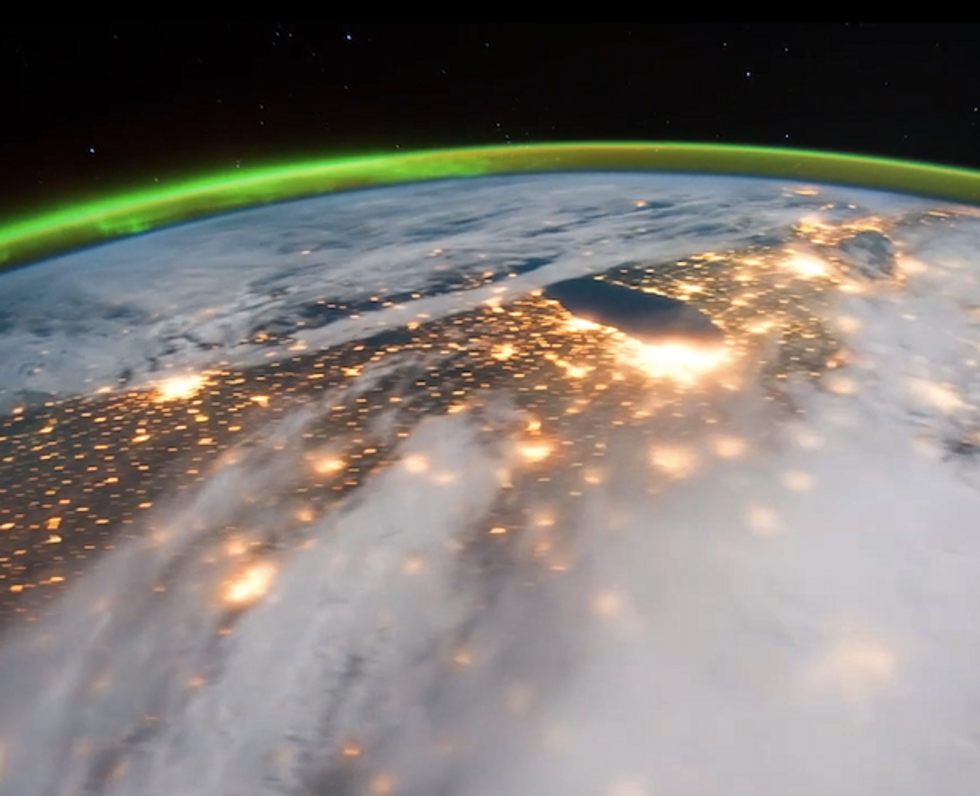 “As viewed by astronauts from the moon, the earth lacks those lines of sociopolitical division that are so prominent on maps. And as recognized here below, the web of interlacing socioeconomic interdependencies that now enfold the planet is of one life. All that is required is a general change of vision to accord with those contemporary facts.”

I’m reading Kevin Kelly’s What Technology Wants and he’s arguing that inevitability is a prime component of the evolutionary process, along with contingency and adaptation. In one chapter, he lists several pages of instances of massive simultaneous parallel invention: Elisha Gray’s patent application for the telephone three hours before Alexander Graham Bell; the twenty three inventors of the light bulb (with Edison dead last); the six independent discoveries of the principles behind the atom bomb. Innovation seems to precipitate out of society at crucial densities, the same way silver nitrate precipitates in solution – or, as American academia is increasingly and finally convinced, life precipitates wherever the basic preconditions allow for primitive metabolisms.

In other words, re-run history and get nearly identical results – different names and details, same general idea – but in this alternate world the stop lights are still red, because of the psychophysiological constraints of fruit-adapted color vision in primates, which we inherited. No matter which way the river runs down the mountain, the water still carves oxbows, finds an ocean, evaporates and rains again. Competitive incentives for social cooperation evolved multicellularity over forty times on Earth (that we know of), make cities one of the most successful ideas in natural history – and basically guarantee human beings of some kind or another on every living world, eventually.

If we entertain this reversal of 20th Century biological doctrine, it isn’t merely intellectual property law that gets turned on its head. If technological adaptation – where “technology” includes all ideas, no matter how abstract – is a partially-determined, quasicrystal chemical reaction, there may be ways to study the flow of ideas in society, to follow the eddies and currents as they self-assemble into the Next Big Thing before our number-crunching eyes.

Imagine zooming out to geosynchronous orbit and watching a map of light points rippling like the chromataphores of a cuttlefish as the location of everyone feeling love/thinking about the future/playing jazz pops up, illuminating the cloud-hidden coastlines. Art and Science, both children of Magic, made love and gave birth to Creative Data Visualization, which makes the world while pretending to discover it, immersing us in a new programmable landscape of sensor accumulations. In so doing, we have mutated from the individual persons to whom we were born and linked our filaments, sharing eyes, ears – and soon noses, skin – in a thin gauze of copper over everything. Each of us is at the nexus of innumerable fields, and the human species a grid of photon-emitting nodes, receiving and transmitting vastly more information than passes into the you-don’t-need-to-know-space of conscious awareness. The Moon passes through its phases, the tides rise, and gravity pulls on the rock beneath us – squeezing tectonic plates and creating a cyclical piezoelectric current that modulates human hormone release. Sunspots seem to come and go in time with wars and feel-good music.

And I’m reading Kelly’s book on a week I’ve been weirdly nocturnal, and my friends across the country are losing sleep too, and while I’m night-owling it again in conversation with my friend in a crowded club he says to me, “We are electrical beings, constantly in communication with our environments. I bet with the right equipment we could see emotions passing through neighborhoods and cities like waves, everyone alone in their homes thinking it’s only happening to them.” Meanwhile, web bot experiment HalfPastHuman scours the internet for changing associations between three hundred thousand distinct search entities and from them builds a map of the next year – because we all talk about the future like birds before earthquakes, only we don’t think we do. Step far enough away from the chatter to see the patterns and genius is essentially ripeness, or what we call those first to ripen. (Tell me if you are so much more attached to one orange, than another…)

Gazing down from space we notice the ancient pyramids lining up along tropical meridians, aligned to the ancient constellations. Did they know where they were building, or did they simply follow their hunches, coordinated not by a lost global civilization but by a deeper connection to the intuitive information of the planetary lattice of sacred “power spots?” How do we today, with our allegedly rational civil planning, claim we are not merely doing as the land tells us – that we are not the land itself, as orderly as fluorite, or iron filings lining up to the silent guidance of a magnet?

Earlier revolutions celebrated a new level of global solidarity discovered through telegraph, radio, television, the internet. If we can see a person, we can feel their suffering, and suddenly I the American am you the Chinese. National governments, once the proudest achievement of the biosphere, are now a planetary auto-immune disorder fighting the butterfly of a unified humankind as it liquidates the caterpillar to make room for wings. (Yes, “liquidates.” Economic crisis is a symptom of transformation. You can’t do that much mindless eating without having to reckon with your debt.)

It isn’t just privacy that is at stake, here – it is the discrete self of rational ethics, an individual with the audacity to say, as Ayn Rand did, “Nobody helped me,” and ignore the trillions of bacterial cells covering and constituting every cell of her body, breathing the air and eating the sugar. To say it takes a village to raise a child is a severe understatement, and increasingly the average person seems aware that the average person is a village, and a global village.

So this all starts right here by recognizing that you live on a spherical creature spiraling around the Sun’s own helical trajectory through the dynamic interstellar medium, through cosmic dust and lightning storms, and whichever way you point we can go no deeper into “space” than we already are. And as the feeling of humanity as a layer stretching out in every direction on the surface of this sphere increases, as you can almost sense those people in their houses, watching tv or making love or crying about work, the children wondering what adulthood is like, the adults wondering about God…this is you, this is your body, and everyone’s successes are your successes. Every new idea is as yours as your heartbeat – out of your control but part of what defines your being in this time and place.

And so like the old saying goes, “Let a hundred flowers bloom.” Let every orange blossom open, and this tree stand in its full splendor.

Originally published at The Renaissance Project.

Paleontologist turned performing philosopher, Michael Garfield’s multimedia maps of the evolutionary landscape and our place in it are an attempt to demonstrate that everything is equally art, science, and spiritual practice. Follow him on twitter: @michaelgarfield