Despite a growing sense of unease at the uncertainties of modern society—from turbulent political events to widening income inequality—youth around the world continue to be very optimistic, a large global survey concludes.

Taken in 45 cities across 32 countries between November 2016 and January 2017, the survey gathered responses from 7,394 individuals aged 18-24. It was carried out by the international research firm Ipsos as part of Citi Foundation’s Pathways to Progress initiative. The goal of the philanthropic program is to impact youth unemployment around the planet, which stands at more than 13%.

When asked if they had “many opportunities” to find success in their careers, 70% of the young people surveyed said “yes”. Of those living in developing markets like Shanghai or Mexico City, 79% believed they would be successful. That number is substantially higher than the 64% of youth in developed economies, e.g. New York or Singapore, who felt they would be successful.

“This optimism holds true despite the changing political and economic landscapes. When we did this survey, we were undergoing (the) intensifying global refugee crisis, we had the Brexit vote in the United Kingdom, and the US presidential elections,” said Lim.

Underpinning the optimism is the belief by many young people that they live better than their parents. Over 75% say they are more successful than their parents were at the same age. This includes those who say they have a better ability to get an education (83%), better ability to achieve professional goals (78%) as well as better access to quality health care (77%). 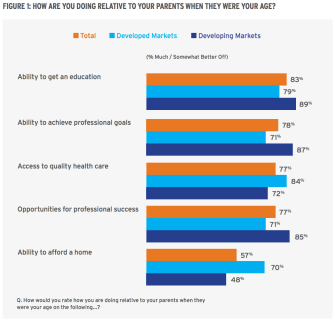 One area where optimism among young people wanes relative to their parents regards the affordability of owning a home. 57% of the youth surveyed are optimistic that they can will be able to purchase a home. The number drops to 48%, however, if only youth in developed markets are considered. Researchers think the 2008 financial crisis may be responsible for this less positive attitude.

There is also a sizable gap between the jobs young people have and the jobs they want. 55% say they are working in a field they don’t want to be in. Nonetheless, more than 70% feel they’ll find success in a desired field eventually.

The most popular career field for young people across the world is technology and science. 20% of youth surveyed aspire to careers in that field, followed by arts and entertainment at 11%. While 20% of youth want to be working in science and tech, only 12% currently are employed in that field. Reality does not yet match expectations, but that has yet to dampen optimism that it will. 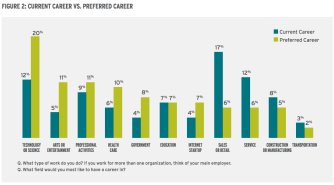 Another area where the desires of young people aren’t being met is in education. According to the survey, 67%of young people around the world see a university education as essential for their future success, but a 69% believe that goal is financially out of reach. Also seen as important but out of reach are apprenticeships and internships, with 60% of urban youth surveyed expressing a lack of opportunity and 78% saying such opportunities are needed.

“Whether you go to Manila, Mumbai, Nairobi, Jakarta, Lima, Panama City and Delhi, if you ask the youth, they’ll say, ‘I wish I could be apprenticed but there’s just no opportunity for me.’ There is a mismatch between the demand for opportunities and supply,” explained Lim.

Related
Starts With A Bang
The galaxy cluster that broke modified gravity
19 years ago, the Bullet Cluster provided an empirical proof for dark matter. Even today, modified gravity still can’t explain it.
Neuropsych
Psychology studies that go viral are likelier to be bogus
A new 20-year analysis of over 14,000 psychology studies finds that a study’s media coverage is negatively linked to its replicability.
The Future
How a device transmits radio waves with almost no power
Apart from the energy needed to flip the switch, no other energy is needed to transmit the information.
The Present
Radical idea: Redraw the U.S. map as a nation of city-states
While cities drive national economic growth, their political geography means they cannot effectively deal with inequality, poverty, and other socioeconomic problems.
The Learning Curve
Why do high IQ people stagnate in their careers? Emotional intelligence
Research suggests that emotional intelligence is more vital for success than IQ.
Up Next
Technology & Innovation
Why Don’t Poison Frogs Die from Their Own Neurotoxin?
The results of this study may help scientists devise new drugs for pain and nicotine addiction.