Humans have been fighting the influenza virus for millenia. We’ve discovered new strains throughout the years and also devised greater methods for eradicating them along the way. But on the 100th year anniversary of the Spanish Flu pandemic, it’s more important now than ever that we look back at one of the deadliest pandemics the world has ever faced.

Our global village is tied together in such a way that it makes containing a localized infection nearly impossible. Through air, freight-train and onwards through land and sea, the most populous and densely packed cities in the world are now just a stone’s throw away.

The possibility that another epidemic could sweep through the world and claim millions of lives is no surprise to the experts. After all, it’s happened before. 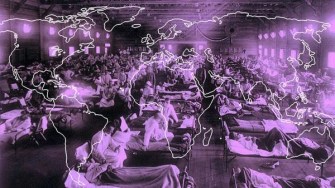 History of the Spanish flu pandemic of 1918

Let’s look back at how the Spanish flu first got its start.

It was the fall of 1918 and the First Great War in Europe was just winding down. Americans had been shipped overseas and were helping assist the Allies as they fought against the Germans. Soldiers around the globe dug out and wintered through trenches in horrible and brutal conditions. They had probably thought they’d seen the worst of things by this point.

Lurking just somewhere over the horizon, however, was one of the deadliest flus the world would ever face.

Over a third of the world’s population became infected. Erupting in pockets around the globe the outbreaks swept through Asia, Europe, Africa and America by bustling trade routes. Many also suspected rapid troop movement assisted in the spread of the disease. Around 675,000 Americans died of influenza during the two year pandemic.

The intensity and speed in which the pandemic struck was unfathomable at the time. With over 500 million people infected and an estimated 50 million deaths worldwide, the global death toll eclipsed even World War I casualties. The disease is not “Spanish” in origin per say, but because of wartime censorship in other countries, Spain was the first to report of the pandemic.

Our most recent flu seasons pale in comparison to the great plight wrought from the Spanish flu.

For the most part, vaccinations, antibiotics and better global hygiene has drastically reduced the effects of influenza and other associated diseases. But viruses never rest — and they never stop evolving.

Officials at the Centers for Disease Control and Prevention have estimated that a preliminary figure of last year’s winter flu season was around 80,000 deaths. This figure may be revised, but it’s unlikely the numbers will go down. Dr. Daniel Jernigan, a CDC flu expert, believes that the deaths were higher than usual because there are both more Americans and more elderly people now.

Luckily, Jernigan believes that next year’s flu season is stacking up to be both a milder strain and also more receptive to vaccination. “We don’t know what’s going to happen,” he said, “but we’re seeing more encouraging signs than we were early last year.”

While we might be all right for the upcoming flu season. Others warn that a hidden virus could jumpstart a new global pandemic.

The U.S is not ready for a major pandemic

One of the worst case scenarios in the short term, could be the release of a hidden, lethal and highly infectious flu strain that breaks out into a crowded city. According to the John Hopkins’ Bloomberg School of Public Health, this would be devastating for an unprepared city that lacked a strong public health infrastructure.

A fast moving virus could hitch a ride from one city to a next and spread internationally before health officials even knew what hit humanity. Scientists at John Hopkins believe that avian influenza viruses pose the greatest risk if they evolve into deadlier strains. Amesh Adalja from the Center of Healthy Security at John Hopkins states: “In terms of pandemic potential, an avian influenza virus is thought to be a likely candidate, based on prior pandemics.”

Yet, there are safeguards that didn’t exist 100 years ago we can use to preemptively ward off a potential flu pandemic.

For example we can:

The more we do to combat these diseases now, the less risk we have for another worldwide pandemic later.

On New Year’s Eve 1899, the captain of this Pacific steamliner sailed into history. Or did he?
Up Next
Life

fMRI study of dogs suggests they do know human words

“What a shock,” said no dog owner ever.