Doctors have suspected for some time that white spots appearing in MRI brain scans are associated with cognitive decline. However, the relationship between the number and size of spots and the likelihood of dementia has been mostly a judgment call. Now, a new study from New York University’s Grossman Medical Center proposes the first standardized, objective measurement tool designed to predict cognitive decline when considered alongside other factors.

The study is published in the journal Academic Radiology.

The white spots, or “hyperintensities,” are brain lesions—fluid-filled holes in the brain believed to have been left behind by the breaking down of blood vessels that had previously provided nourishment to brain cells.

Prior to the new research, the quantity of white spots was assessed using an imprecise three-point scale indicating ascending likelihoods of dementia: A minimal number of spots was considered as level 1, a medium number of spots level 2, and a great number of them level 3. 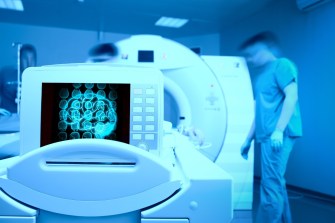 The team of researchers from NYU’s Langone’s Center for Cognitive Neurology and Alzheimer’s Disease Research Center were led by Jingyun “Josh” Chen. They analyzed 72 MRI scans from a national database of older people taken as part of the Alzheimer’s Disease Neuroimaging Initiative (ADNI). The scans were mostly of white people over age 70, and there were a roughly equivalent number of men and women. Some had normal brain function, some were presenting moderate cognitive decline, and some had severe dementia.

Without knowing each individual’s diagnosis, the researchers analyzed the white spots in their scans. While the team counted each scan’s lesions, the innovation they introduced was the production of a 3D measurement for each lesion’s fluid volume. The measurement was derived by measuring a lesion’s distance from opposite sides of the brain.

Measurements of 0 milliliters (mL) were assessed for areas without white spots, with other white spots coming up as containing 60 mL of fluid. Chen’s team predicted that volumes over 100 mL could signify severe dementia.

“Amounts of white matter lesions above the normal range should serve as an early warning sign for patients and physicians,” Chen told NYU Langone Health NewsHub.

When the team compared the likely diagnoses derived from their calculations against the individuals’ medical records, they found that their predictions were correct about 7 out of 10 times.

The researchers compiled their formulas into an online tool that’s available to physicians for free via GitHub. The researchers plan to further refine and test it using an additional 1,495 brain scans representing a more diverse group of individuals from the ADNI database.

Chen notes that white spots alone may not tell the entire story of an individual’s cognitive decline or the onset of dementia. Other factors must be considered as well, including memory loss, hypertension, and brain injuries.

Nonetheless, says senior investigator Yulin Ge, “Our new calculator for properly sizing white matter hyperintensities, which we call ‘bilateral distancing,’ offers radiologists and other clinicians an additional standardized test for assessing these lesions in the brain, well before severe dementia or stroke damage.”

Having an objective means of measuring white hyperintensities will allow physicians not only to get a better handle on the association between white spots and dementia, but also to track the spots alongside changes to a person’s tau and beta-amyloid proteins, two chemicals implicated in Alzheimer’s disease and dementia.

A study finds that older adults who cannot balance on one foot for ten seconds have an 84% higher risk of death than those who can.
Up Next
Strange Maps