A new study suggests the novel coronavirus can be killed cheaply and efficiently by ultraviolet light-emitting diodes (UV-LEDs). By using UV-LEDs in ventilation and air-conditioning systems, the technology could help disinfect air in spaces like buildings, planes, and subways. Robots equipped with UV-LEDs could also be used to disinfect surfaces.

During the COVID-19 pandemic, ultraviolet light has been used to disinfect subway cars and other spaces. There are several types of germicidal-ultraviolet-light technology, including excimer lamps, low-pressure mercury lamps, and pulsed xenon lamps. The newest in the bunch is UV-LED. 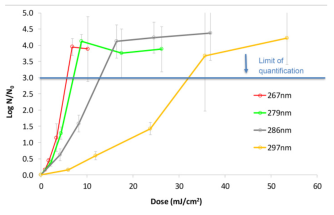 Dose (fluence) response curve of the HCoV-OC43 to UV-LEDs. N is virus count after the designated irradiation and N0 at time zero (without irradiation).Credit: Gerchman et al.

“UV light-emitting diodes (UV LEDs) are an emerging UV source for disinfection,” wrote the researchers behind the new study, published in the Journal of Photochemistry and Photobiology. “UV-LEDs allow for flexibility of design due to their small size and control of radiation patterns, have very short turn-on time, and require low voltage (and thus can be operated by a battery or a solar panel).”

But lower-wavelength UV-LEDs require high amounts of power, making the technology costly. That’s one reason why the new study aimed to find the range of wavelengths in which UV-LEDs most effectively kill coronaviruses. 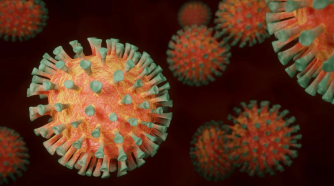 “We discovered that it is quite simple to kill the coronavirus using LED bulbs that radiate ultraviolet light,” study author Hadas Mamane told Tel Aviv University American Friends News. “We killed the viruses using cheaper and more readily available LED bulbs, which consume little energy and do not contain mercury like regular bulbs. Our research has commercial and societal implications, given the possibility of using such LED bulbs in all areas of our lives, safely and quickly.”

To be sure, the researchers didn’t experiment on the novel coronavirus, but rather HCoV-OC43, which causes the common cold. But they wrote that “both human Coronaviruses HCoV-OC43 and SARS-CoV-2 are very similar, thus it is reasonable to suggest a human Coronavirus HCoV-OC43 as a surrogate for SARS-CoV-2, and our future work will confirm these results by testing the impact of LEDs and their combinations on SARS-CoV-2.”

UV-LEDs may effectively kill bacteria and coronaviruses. But the main way coronaviruses spread is through respiratory droplets passed from human to human, so the technology wouldn’t be able to stop that kind of spread.

What’s more, like all ultraviolet light, light from UV-LED bulbs is dangerous to humans. That’s why the technology, if it becomes widely available, would need to be safely integrated into the infrastructure of buildings to disinfect air, or used by robots that can be sent into spaces to quickly disinfect surfaces.

“The entire world is currently looking for effective solutions to disinfect the coronavirus,” Mamane said. “The problem is that in order to disinfect a bus, train, sports hall, or plane by chemical spraying, you need physical manpower, and in order for the spraying to be effective, you have to give the chemical time to act on the surface. Disinfection systems based on LED bulbs, however, can be installed in the ventilation system and air conditioner, for example, and sterilize the air sucked in and then emitted into the room.”

Bend it. Stretch it. Use it to conduct electricity.

Jimena Canales shares the “demons” that shaped computer science.
▸
6 min
—
with
Jimena Canales
Up Next
The Present

An important step toward figuring out our space station future.