In science fiction they have it all figured out: Former inhabitants of Earth roaming the galaxies in massive space stations that waste nothing — everything, and everyone, is recycled. Now though, there remains a lot to be figured out. Real-world solutions have to be invented that can come together to create the sustainable closed environments that will be required for spaceships and space colonies, not to mention unwelcoming terrestrial environments we hope to explore.

Researchers at the Tokyo University of Science, led by Norihiro Suzuki, have just published a study in the form of a letter in New Journal of Chemistry. It proposes an innovative system for deriving ammonia-based liquid fertilizer from human urine, a win-win that would simultaneously deal with waste as it benefits agriculture. 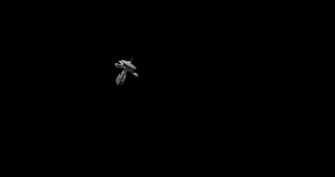 In the past, we’ve built communities in areas that provide the resources we need to sustain us. When we’ve needed to grow food, we’ve populated locations that have water, land on which to grow food and raise livestock, a decent climate, enough space for us to live, and so on. As we leave such cozy environs, all of that goes out the airlock. As things stand now, all we have will be what we bring with us as we step out among the stars.

Among the most successful types of fertilizer traditionally has been animal waste that’s rich in nitrogen. With this in mind, Suzuki’s team has been working on the production of ammonia—which is made up of nitrogen and oxygen—derived from the compound urea found in urine.

Says Suzuki, “I joined the ‘Space Agriteam’ involved in food production, and my research specialization is in physical chemistry; therefore, I came up with the idea of ‘electrochemically’ making a liquid fertilizer.”

“This process is of interest from the perspective of making a useful product,” asserts Suzuki, “i.e., ammonia, from a waste product, i.e., urine, using common equipment at atmospheric pressure and room temperature.” 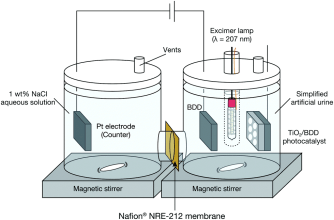 The researchers’ experiments so far have used artificial urine.

The electrochemical process the scientists invented works at room temperature.

One one side, a reaction cell held both 50 milliliters of an artificial urine sample and a boron-doped diamond (BDD) electrode in a photocatalyst of titanium oxide that was continually stirred throughout the process. On the other was a counter cell in which a platinum electrode was immersed in salty water. When a steady current of 70 mA was introduced to the BDD electrode, the urea oxidized and formed ammonia atoms.

As part of the experiment, the researchers also exposed the photocatalyst-immersed BDD to light to see if that affected the process, and found that it actually led to less ammonia being oxidized.

Next up, says Suzuki, “We are planning to perform the experiment with actual urine samples, because it contains not only primary elements (phosphorus, nitrogen, potassium) but also secondary elements (sulfur, calcium, magnesium) that are vital for plant nutrition!”

Tokyo University’s Space Agriteam is part of the school’s Research Center for Space Colony. Obviously, agriculture in space is a key element in developing humankind’s off-planet future. Their emphasis is finding technological solutions toward the development of safe, sustainable space agriculture that can thrive in a totally closed-off environment.

The potential for the researchers’ new invention is clear to Suzuki, who predicts “it will turn out to be useful for sustaining long-term stay in extremely closed spaces such as space stations.”

There are at least 15 different types of solid water (ice). Now, scientists believe that there might be a second type of liquid water.
Up Next
Starts With A Bang

7 Anti-Science Myths We All Need To Unlearn