Due to stigma, their illegal status and difficulty in finding control groups, research with psychedelics has been a challenge. But research increasingly shows that this class of drug has legitimate medicinal uses, and they may be just as good or even better than more traditional therapies.

Now, the Centre for Psychedelic Research at Imperial College London reports in the New England Journal of Medicine that when pitted against escitalopram (brand name: Lexapro), psilocybin was as effective as the popular SSRI (selective serotonin reuptake inhibitor) in treating moderate to severe depression. Perhaps most significantly, these results were obtained when comparing 6 weeks of daily doses of escitalopram to just two administrations of psilocybin.

Robin Carhart-Harris, head of the center who has published over 100 papers on psychedelics, is confident this study represents another step forward in applying psychedelics to mental health treatment protocols while also reducing fears a lot of citizens have around these substances. In a press release, he said:

“One of the most important aspects of this work is that people can clearly see the promise of properly delivered psilocybin therapy by viewing it compared with a more familiar, established treatment in the same study. Psilocybin performed very favorably in this head-to-head.” 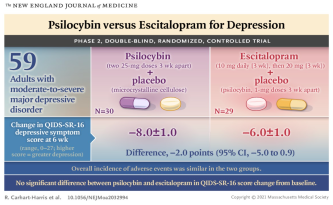 At the end of the study, both groups saw a decrease in depressive symptoms, though the results were not statistically significant. (That isn’t necessarily bad because if the two drugs have similar effects, then they would not produce statistically significant results. Still, a larger study is needed to confirm that psilocybin is “just as good as” escitalopram.)

As psychedelics become decriminalized and potentially legalized for therapeutic use, however, a large population of people might desire the antidepressant effects without the hallucinations. For example, the psychedelic ibogaine may be useful for treating addiction, so the company Mindmed is developing an analog that works without producing the unwanted hallucinogenic side effects.

A new research article, published in the journal PNAS, investigated the antidepressant effects of psilocybin on a group of chronically stressed mice. (Under immense stress, mice develop something resembling human depression.) As with humans, depressed mice lose a sense of joy, which can be assessed by determining their preference for sugar water over tap water. Normal mice prefer sugar water, but depressed mice simply don’t care.

Once the mice were no longer juicing up on the sweetened water, the team dosed them with psilocybin alongside a drug called ketanserin, a 5-HT2A serotonin receptor antagonist that eliminates psychedelic effects. Within 24 hours of receiving the dose, the mice were rushing back to the sugar water, indicating that tripping is not necessary for psilocybin to work as an antidepressant.

While the team is excited about these results, they realize it needs to be replicated in a different population.

“The possibility of combining psychedelic compounds and a 5-HT2AR antagonist offers a potential means to increase their acceptance and clinical utility and should be studied in human depression.” 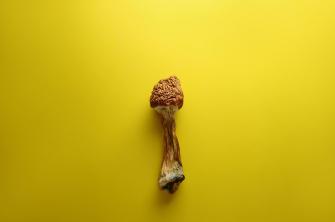 The future of psychedelic therapy

Psychedelics such as psilocybin and LSD have a long track record of efficacy in clinical trials and anecdotal experiences. Almost all volunteers of the famous Marsh Chapel experiment claimed their experience on Good Friday in 1962 was one of the most significant events of their lives — and this was a quarter-century after the fact. A more recent, controlled study found that a single dose of psilocybin showed antidepressant effects six months later.

Proponents of macrodosing and ritualistic experiences sometimes argue that the full-blown mystical trip is the therapy, though this is anecdotal, not clinical research. As the Maryland team noted, a number of people are contraindicated for psychedelics, whether through a family history of schizophrenia or current antidepressant treatments.

Senior author Scott Thompson is excited for future research on this topic. As he said of his team’s findings:

“The psychedelic experience is incredibly powerful and can be life-changing, but that could be too much for some people or not appropriate… These findings show that activation of the receptor causing the psychedelic effect isn’t absolutely required for the antidepressant benefits, at least in mice.”

Hopefully, with more research occurring in psychedelics than even in the 1950s (when studies predominantly relied on anecdotal evidence and little government support), the longstanding stigmatization of psychedelics is beginning to recede. This could open up new possibilities for both clinical research and, for those curious about the ritual effects, a continuation of introspective experiences.

Tags
depressionmental healthneurosciencephysiologypsychedelicsPsychedelics & Drugspsychology
In this article
depressionmental healthneurosciencephysiologypsychedelicsPsychedelics & Drugspsychology
Related
Neuropsych
Why is a Starbucks loyalty rewards program making customers so angry?
The rewards price to get a free cup of hot coffee at Starbucks is going up.
Thinking
What if you could rewire your brain to conquer suffering? Buddhism says you can
For Buddhists, the “Four Noble Truths” offer a path to lasting happiness.
3 game theory tactics, explained
How to maximize wins and minimize losses, explained by four experts on game theory.
▸
7 min
—
with
Kevin Zollman
Health
When’s the best time to consume caffeine? Hint: Not right after you wake
Get the most out of your coffee.
Sponsored
What childhood “money story” is shaping your financial behaviors?
Here are the signs that you inherited “money anxiety” from your parents.
Up Next
Starts With A Bang
The Tiniest Black Hole In The Milky Way Was Right There All Along
At just 3 solar masses, it eliminates the “mass gap.”Searching for black holes is one of the most difficult astronomical games a scientist can play. Emitting no light of their own, […]