What does it mean to say someone has a food addiction?

The topic has long been controversial among scientists, with some saying that consuming large amounts of sugar (and/or fat and salt) excites the brain’s reward system, leading to drug-like addictions. Others say that food addiction is better classified as a behavioral addiction, where people become dependent on a behavior because the action itself makes them feel good.

Now, a new study, published in Nature Scientific Reports, supports the idea that sugar can cause drug-like additions, and that regular consumption can significantly change the brain’s reward system after just a couple weeks.

To study the effects of sugar on the brain, researchers from Aarhus University had pigs drink 2 liters of sugar water over 12 days, taking images of the pigs’ brains before the experiment, after day one, and after the 12th day. Throughout that period, the pigs consumed a normal diet, and they were only given access to the sugar water intermittently, which promotes binging.

Why use pigs for the experiment? The researchers noted that, while rodents are often used in brain imaging studies, pigs are a good alternative because their brains are relatively complex and large enough to capture images of deeper brain structures. (Of course, it would’ve been ideal to take images of human brains for the study. But because many factors affect dopamine levels, from YouTube videos to going on a date, it’s difficult to tell exactly how sugar affects them.)

The results revealed that pigs on the sugar-water diet showed less dopamine and opioid receptor availability. In other words, consuming a bunch of sugar made their brains less responsive to these feel-good neurotransmitters, and so, similar to a drug addiction, they’d need to consume even more sugar to achieve the same pleasurable effect. 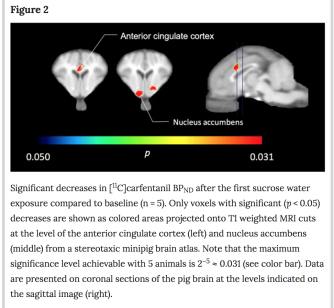 “After just 12 days of sugar intake, we could see major changes in the brain’s dopamine and opioid systems,” Michael Winterdahl, Associate Professor at the Department of Clinical Medicine at Aarhus University and study author, told Neuroscience News. “In fact, the opioid system, which is that part of the brain’s chemistry that is associated with well-being and pleasure, was already activated after the very first intake.”

The brain’s reward system helps us understand what’s valuable. For example, we experience a surge of dopamine, say, when we fall in love with someone, or when we succeed at a difficult task. This encourages us to repeat the behaviors that produced that good feeling. In a similar way, other things that trigger the release of dopamine, like drugs or food, can cause us to reinforce unhealthy behaviors.

“If sugar can change the brain’s reward system after only twelve days, as we saw in the case of the pigs, you can imagine that natural stimuli such as learning or social interaction are pushed into the background and replaced by sugar and/or other ‘artificial’ stimuli,” Winterdahl. “We’re all looking for the rush from dopamine, and if something gives us a better or bigger kick, then that’s what we choose.”

Eating too much sugar may raise your tolerance for other substances

The pigs showed decreased dopamine receptor availability after 12 days, even though they hadn’t been given sugar for 24 hours. Why? The researchers noted that dopamine is often released by simply wanting or expecting drugs and other pleasurable activities, and that the resulting reduction of dopamine receptors can “raise brain reward thresholds.” Interestingly, they suggested that this might desensitize the brain to other stimuli that trigger dopamine. So, getting “addicted” to sugar could potentially raise your tolerance for other substances: amphetamines, cocaine, alcohol, etc.

​How to curb your sugar intake

Sugar isn’t bad in moderation. However, excessive sugar intake can lead to obesity and a variety of diseases, possibly including diabetes and cancer. The main problem is that many foods, especially fast and processed foods, pack in loads of sugar, partly because it’s a cheap way to boost taste, and also because food manufacturers know it’s likely to hook customers.

Still, it’s probably not a good idea to cut out your sugar intake altogether, considering that multiple studies suggest you might experience withdrawal symptoms. To work toward a healthier diet, Harvard Medical School recommends a few tips:

There are two kinds of suffering. One is pure pain. The other makes life worth living.
▸
6 min
—
with
Paul Bloom
Up Next
Neuropsych