The toilet holds a special place in the history of health. For most of that history, people collected their waste in cesspits, chamber pots, or the occasional pigsty, all precariously close to where they lived and what they ate. This meant our ancestors were never far from whipworm, cholera, typhoid, giardia, and the cavalcade of other pathogens that call feces home.

The earliest flushing toilets only appeared around 4,000 years ago, courtesy of the Minoan and Indus Valley civilizations. And while much is made today of ancient Rome’s plumbing prowess, the Romans were no strangers to the micro-nasties mentioned above. May have had something to do with the sponge on a stick used for wiping in public latrines—which, yes, was also for public use.

By the mid-18th century, inventors began crafting the mechanisms that would make the modern toilet possible. After that, a businessman named Thomas Crapper—his real name, though he is not the namesake of the euphemism—promoted and popularized the indoor water closet.

Since then, most of the advances in toilet technology have occurred downstream, erm, flush. Granted, the Japanese have stepped up the toilet game, incorporating heated seats, app functionality, and Bach string quartets into the experience. But these are chic accouterments to an otherwise set porcelain blueprint.

That changed with a new study out of Stanford. 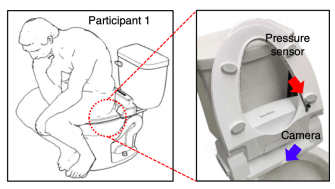 An image and diagram showing where the smart toilet’s pressure sensor and stool camera are located.

Going to see a doctor about a horse

Stanford researchers have completed a pilot study of their new “smart toilet” technology. The technology monitors user health through a suite of gadgets that evaluate urine and stool, well, samples.

The researchers published their findings in Nature Biomedical Engineering earlier this month.

“Our concept dates back well over 15 years,” Sanjiv Gambhir, professor of radiology at Stanford and the study’s senior author, said in a release. “When I’d bring it up, people would sort of laugh because it seemed like an interesting idea, but also a bit odd.”

In truth, the researchers haven’t designed a new toilet. They’ve outfitted a classic porcelain seat with an assortment of automated sensors and cameras to record the powder room happenings.

“It’s sort of like buying a bidet add-on that can be mounted right into your existing toilet,” Gambhir said. “And like a bidet, it has little extensions that can carry out different purposes.”

The smart toilet uses pressure and motion sensors to track the frequency and duration of a user’s restroom visits. A set of cameras then capture the deposits on video, while algorithms process the imagery to distinguish between healthy bowel movements and those showing signs of disease.

Urine is analyzed through urodynamics, which looks at the flow, rate, and magnitude of the stream. The stool is analyzed with the Bristol stool scale, which reviews consistency.

The toilet is also equipped with a urinalysis stick. This “dipstick test” can analyze urine for acidity, protein levels, white blood cell count, blood contamination, and other biomarkers.

The algorithms then compile the data for a preliminary diagnosis and send them directly to a health care provider’s record-keeping system. These data could recognize the early signs for a host of diseases, such as kidney failure, irritable bowel syndrome, and colorectal cancer, much sooner than with traditional doctor visits.

And a major advantage to such a biometric device, Gambhir points out, is that it can’t be duped by human interference or lack of commitment. Because everyone poops, it provides continuous health monitoring.

“The thing about a smart toilet, though, is that unlike wearables, you can’t take it off,” he said. “Everyone uses the bathroom—there’s really no avoiding it—and that enhances its value as a disease-detecting device.” 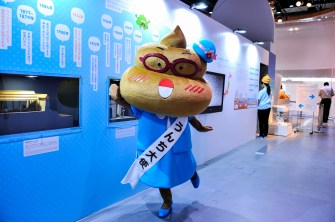 A mascot for the 2014 “Toilet!? Human Waste and Earth’s Future” exhibition in Tokyo.

Yes, but does it have butt-recognition technology?

Obviously! There wouldn’t be much point otherwise.

Since a house toilet will be used by a variety of people, Gambhir and his team had to devise a way for the technology to keep medical profiles distinct. They first added a fingerprint scanner to the flushing lever, and while it remains in the final design, they soon realized it wasn’t enough. After all, if someone forgets to flush and another person flushes for them? Or the toilet has an automatic flush? That’s valuable data down the drain.

So Gambhir and his team did the logical thing: They added a camera to the smart toilet that scans a user’s anus to ensure health data is matched to the proper derriere.

To assuage privacy concerns, the team secures all data transmission with end-to-end encryption that is HIPAA-compliant. Another approach is to use an infrared camera or low-intensity laser scanner, which allows the algorithm to produce an ID but does not produce a conventional image. 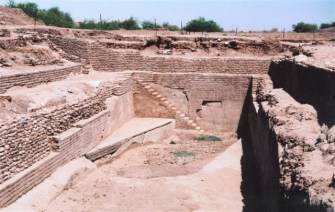 We’ve come a long way since the hydraulic sewage system of the ancient Indus Valley civilizations.

All told, 21 participants used the smart toilet during the pilot run. For the next study, Gambhir and his team are hoping to increase number of participants, add new stool analysis features, and improve existing ones.

“The smart toilet is the perfect way to harness a source of data that’s typically ignored – and the user doesn’t have to do anything differently,” Gambhir said.

Research shows how temperature can be used to manipulate circadian rhythms.
Neuropsych

Heart muscle is shaped like a spiral, a mystery that has eluded scientists since 1669. New research has recreated the structure.
Up Next
Starts With A Bang

Astrophysics Signal Does What The LHC Cannot: Constrain Quantum Gravity And String Theory

Photons always propagate at the speed of light and obey the same rules of nature, regardless of their energy. If certain models of quantum gravity or string theory are correct, […]