A new type of soft contact lens could someday allow wearers to zoom in on distant objects just by blinking, or moving their eyes.

In a paper published in Advanced Functional Materials, researchers from the University of California, San Diego, describe how they developed a biomimetic soft lens that’s able to expand instantly, changing the focal length and motion of the lens. The lens — it is made of stretchy, electro-active polymer films — uses electrodes to interpret the electro-oculographic signals that we generate in the tissues around the eye.

The goal is to make the lens sensitive enough to discern subtle changes in these signals, and to match the signals with actions: blink twice to zoom in, look down to focus on near objects, etc.

“Even if your eye cannot see anything, many people can still move their eyeball and generate this electro-oculographic signal,” lead researcher Shengqiang Cai told New Scientist.

“Because of the use of soft materials, the relative change of focal length of the lens could be as large as 32 percent through deformation. Due to the fast response of [dielectric elastomer films], the movements of the eyes and the soft lens could be easily synchronized.” 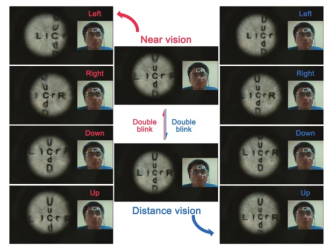 For now it’s just a prototype — one that’s too big to fit in the human eye, and which requires people wear conspicuous electrodes on their face. But the researchers suggested the system could someday be used “in visual prostheses, adjustable glasses, and remotely operated robotics in the future.”

Samsung also appears interested in developing smart contacts. The South Korean company was recently granted a patent for lens technology that could include augmented reality, projecting light directly onto the user’s retina, motion sensing and a camera. The patent also includes a tiny antenna, suggesting it might be able to pair with an external device like a smartphone.

But even if developers can surpass the technological hurdles, it’ll take years before any smart contact lens proves safe enough to make it market.

“Should they strike, each of them has an energy at impact equal to all of the nuclear weapons on Earth combined.”
Up Next
The Present

So what’s the actual difference between Bitcoin and Altcoins?

When it comes to cryptocurrency, Bitcoin has long been the king of the hill thanks to its status as the founder of the young industry and its first-mover appeal. A […]