As Democratic candidates discuss ways to increase voter turnout in 2020, a missing piece of the puzzle has been addressed in Nature Human Behaviour. You likely won’t hear Elizabeth Warren or Pete Buttigieg discuss the importance of sleep for ensuring more bodies at ballot boxes, but that’s what a new study from researchers in the U.S. and Germany discovered.

Sleep has become an important line of research in recent years. Forty percent of Americans sleep less than seven hours per night, resulting in lost productivity, more accidents, and an increased likelihood of dementia. Insomnia is a growing concern for millions.

Yet the opposite is also true. For example, napping increases productivity and engagement at work. Short bouts of sleep help sharpen our senses, strengthen our immune system, reduce the likelihood of cardiovascular disease, help us solve complex problems, and increase mood and cognitive performance. Regular nights of good sleep accomplish many similar goals.

Over the last six decades, they write, increasing number of citizens in industrialized societies receive inadequate sleep—the number has increased fourfold during that time. They estimate between 50-70 million Americans are chronically sleep deprived. Individual negative health outcomes are well-studied. How that affects society, less so.

By conducting three complementary studies, the team found that less sleep equals less participation in the voting booth. Regardless of intention, when citizens were not well-rested, they were less likely to follow through on them. They write,

“Individuals who sleep less and who are chronically fatigued may struggle to engage, even if they want to do so. Such individuals may lack the motivation, capacity and social connections to overcome the hurdles, distractions or costs that get in the way of participating in social processes that benefit society.”

It’s not only voting. Other prosocial behaviors are also implicated in this discussion, including signing petitions and donating money to charity. Many of these citizens state they’d like to civically engage. Anecdote is not data, but when one is cranky or undernourished from lack of sleep, their motivation suffers. The nation suffers as well. 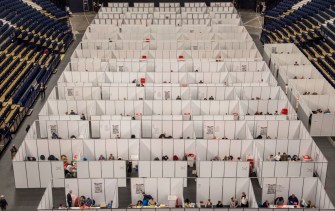 Hundreds of campaigners in Hamburg’s Barclaycard Arena count out the ballots of the district assembly elections. Photo by Axel Heimken/picture alliance via Getty Images

There are many reasons citizens don’t vote. In 2016, 58 percent of eligible voters cast their ballot in America, an eight-point drop from 2008. Midterm voters in 2018 hit a 50-year high—plenty of sleep!—yet we cannot become complacent in 2020. We need to get enough sleep.

As John Holbein says about the consequences of sleep deprivation,

“This shows that many people want to participate but are just too tired to do so. Sleep deprivation has real consequences for the social health of our communities. Not only does it make it harder for people to get their jobs done or to do well in school it also makes them less likely to contribute in ways that build democracies.”

Holbein notes that when we don’t get enough sleep, we become more selfish. We focus on ourselves more and society less. While physiologically understandable, this does not help build a great nation.

Maybe the next stump speech by Democratic candidates should include the benefits of sleep. In fact, a recent NY Times special posed the question to 21 of them: “How many hours of sleep do you get a night?” The main response: “Not enough.” The only two to reply “eight” were Elizabeth Warren and Kirsten Gillibrand. Eric Swalwell might laugh when he replies “four,” but sadly, that answer isn’t good for his health (or that of America).

Asking voters about their sleep habits might take some of them by surprise, but the science is sound. If we ask it of ourselves, we should be asking it of our leaders as well. When it comes to democratic participation, everyone’s effort is required.

Tags
democracyhealthhuman bodymental healthsleepsleep loss
In this article
democracyhealthhuman bodymental healthsleepsleep loss
Related
Health
How saliva changes the flavor of food
“It’s a liquid, but it’s not just a liquid.”
Neuropsych
Memory and the benefits of forgetting
Forgetfulness isn’t always a “glitch” in our memories; it can be a tool to help us make sense of the present and plan for the future.
Health
New blood types are often discovered following medical disasters
New blood types are regularly discovered by an unusual absence or an unusual presence — both of which can result in tragedy.
Neuropsych
How you breathe affects your brain
Your breathing rhythm influences a wide range of behaviors, cognition, and emotion.
Health
What happens when regular porn watchers abstain for a week?
Researchers watched for signs of withdrawal — but didn’t find any.
Up Next
Communication
Stanley Tucci: A director’s guide to project management
Stanley Tucci has played a lot of different roles on movie sets, both in front of and behind the camera. As a director, though, Tucci stands in the center of […]