Few thinkers are as celebrated as Sigmund Freud, a figure as well-known as Charles Darwin and Albert Einstein. Neurologist and the founder of psychoanalysis, Freud’s ideas didn’t simply shift the paradigms in academia and psychotherapy. They indelibly disseminated into our cultural consciousness. Ideas like transference, repression, the unconscious iceberg, and the superego are ubiquitous in today’s popular discourse.

Despite this renown, Freud’s ideas have proven to be ill-substantiated. Worse, it is now believed that Freud himself may have fabricated many of his results, opportunistically disregarding evidence with the conscious aim of promoting preferred beliefs.

“[Freud] really didn’t test his ideas,” Harold Takooshian, professor of psychology at Fordham University, told ATI. “He was just very persuasive. He said things no one said before, and said them in such a way that people actually moved from their homes to Vienna and study with him.”

Unlike Darwin and Einstein, Freud’s brand of psychology presents the impression of a scientific endeavor but ultimately lack two of vital scientific components: falsification and empirical evidence. 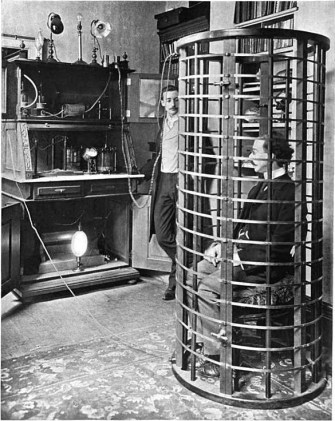 Freud’s therapeutic approach may be unfounded, but at least it was more humane than other therapies of the day. In 1903, this patient is being treated in “auto-conduction cage” as a part of his electrotherapy. (Photo: Wikimedia Commons)

The discipline of psychotherapy is arguably Freud’s greatest contribution to psychology. In the post-World War II era, psychoanalysis spread through Western academia, influencing not only psychotherapy but even fields such as literary criticism in profound ways.

The aim of psychoanalysis is to treat mental disorders housed in the patient’s psyche. Proponents believe that such conflicts arise between conscious thoughts and unconscious drives and manifest as dreams, blunders, anxiety, depression, or neurosis. To help, therapists attempt to unearth unconscious desires that have been blocked by the mind’s defense mechanisms. By raising repressed emotions and memories to the conscious fore, the therapist can liberate and help the patient heal.

That’s the idea at least, but the psychoanalytic technique stands on shaky empirical ground. Data leans heavily on a therapist’s arbitrary interpretations, offering no safe guards against presuppositions and implicit biases. And the free association method offers not buttress to the idea of unconscious motivation.

Don’t get us wrong. Patients have improved and even claimed to be cured thanks to psychoanalytic therapy. However, the lack of methodological rigor means the division between effective treatment and placebo effect is ill-defined. 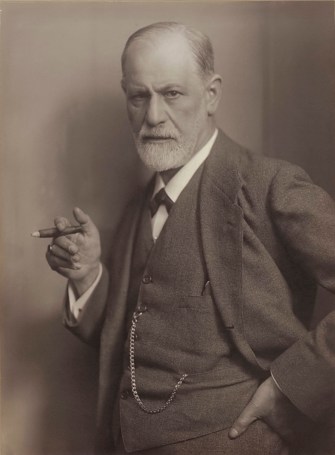 ​Nor has Freud’s concept of repressed memories held up. Many papers and articles have been written to dispel the confusion surrounding repressed (aka dissociated) memories. Their arguments center on two facts of the mind neurologists have become better acquainted with since Freud’s day.

First, our memories are malleable, not perfect recordings of events stored on a biological hard drive. People forget things. Childhood memories fade or are revised to suit a preferred narrative. We recall blurry gists rather than clean, sharp images. Physical changes to the brain can result in loss of memory. These realities of our mental slipperiness can easily be misinterpreted under Freud’s model as repression of trauma.

Second, people who face trauma and abuse often remember it. The release of stress hormones imprints the experience, strengthening neural connections and rendering it difficult to forget. It’s one of the reasons victims continue to suffer long after. As the American Psychological Association points out, there is “little or no empirical support” for dissociated memory theory, and potential occurrences are a rarity, not the norm.

More worryingly, there is evidence that people are vulnerable to constructing false memories (aka pseudomemories). A 1996 study found it could use suggestion to make one-fifth of participants believe in a fictitious childhood memory in which they were lost in a mall. And a 2007 study found that a therapy-based recollection of childhood abuse “was less likely to be corroborated by other evidence than when the memories came without help.”

This has led many to wonder if the expectations of psychoanalytic therapy may inadvertently become a self-fulfilling prophecy with some patients.

“The use of various dubious techniques by therapists and counselors aimed at recovering allegedly repressed memories of [trauma] can often produce detailed and horrific false memories,” writes Chris French, a professor of psychology at Goldsmiths, University of London. “In fact, there is a consensus among scientists studying memory that traumatic events are more likely to be remembered than forgotten, often leading to post-traumatic stress disorder.” 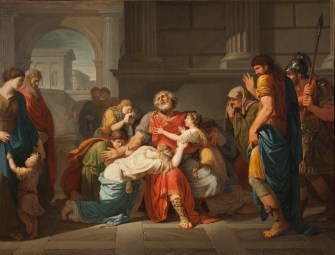 The Blind Oedipus Commending His Children to the Gods by Benigne Gagneraux. (Photo: Wikimedia Commons)

That’s the Oedipal complex in a nutshell. You’d think such a counterintuitive theory would require strong evidence to back it up, but that isn’t the case.

Studies claiming to prove the Oedipal complex look to positive sexual imprinting — that is, the phenomenon in which people choose partners with physical characteristics matching their same-sex parent. For example, a man’s wife and mother have the same eye color, or woman’s husband and father sport a similar nose.

But such studies don’t often show strong correlation. One study reporting “a correction of 92.8 percent between the relative jaw width of a man’s mother and that of [his] mates” had to be retracted for factual errors and incorrect analysis. Studies showing causation seem absent from the literature, and as we’ll see, the veracity of Freud’s own case studies supporting the complex is openly questioned today.

Better supported, yet still hypothetical, is the Westermarck effect. Also called reverse sexual imprinting, the effect predicts that people develop a sexual aversion to those they grow up in close proximity with, as a mean to avoid inbreeding. The effect isn’t just shown in parents and siblings; even step-siblings will grow sexual averse to each other if they grow up from early childhood.

An analysis published in Behavioral Ecology and Sociobiology evaluated the literature on human mate choice. The analysis found little evidence for positive imprinting, citing study design flaws and an unwillingness of researchers to seek alternative explanations. In contrast, it found better support for negative sexual imprinting, though it did note the need for further research.

“Almost invariably I discover a disturbing influence from something outside of the intended speech,” Freud wrote in The Psychopathology of Everyday Life. “The disturbing element is a single unconscious thought, which comes to light through the special blunder.”

In the Freudian view, Mark’s mistaken word choice resulted from his unconscious desire for Deborah, as evident by the sexually-charged meanings of the word “cherry.” But Rob Hartsuiker, a psycholinguist from Ghent University, says that such inferences miss the mark by ignoring how our brains process language.

According to Hartsuiker, our brains organize words by similarity and meaning. First, we must select the word in that network and then process the word’s sounds. In this interplay, all sorts of conditions can prevent us from grasping the proper phonemes: inattention, sleepiness, recent activation, and even age. In a study co-authored by Hartsuiker, brain scans showed our minds can recognize and correct for taboo utterances internally.

“This is very typical, and it’s also something Freud rather ignored,” Hartsuiker told BBC. He added that evidence for true Freudian slips is scant. 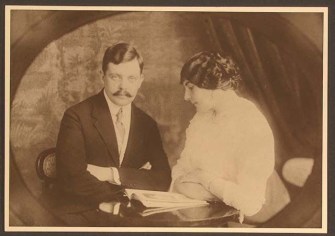 Sergej Pankejeff, known as the “Wolf Man” in Freud’s case study, claimed that Freud’s analysis of his condition was “propaganda.”

It’s worth noting that there is much debate as to the extent that Freud falsified his own case studies. One famous example is the case of the “Wolf Man,” real name Sergej Pankejeff. During their sessions, Pankejeff told Freud about a dream in which he was lying in bed and saw white wolves through an open window. Freud interpreted the dream as the manifestation of a repressed trauma. Specifically, he claimed that Pankejeff must have witnessed his parents in coitus.

For Freud this was case closed. He claimed Pankejeff successfully cured and his case as evidence for psychoanalysis’s merit. Pankejeff disagreed. He found Freud’s interpretation implausible and said that Freud’s handling of his story was “propaganda.” He remained in therapy on and off for over 60 years.

Many of Freud’s other case studies, such “Dora” and “the Rat Man” cases, have come under similar scrutiny. Freud’s ideas may not live up to scientific inquiry, but their long shelf-life in film, literature, and criticism has created some fun readings of popular stories. Sometimes a face is just a face, but that face is a murderous phallic symbol. (Photo: Flickr)

Sigmund Freud and his legacy

If Freud’s legacy is so ill-informed, so unfounded, how did he and his cigars cast such a long shadow over the 20th century? Because there was nothing better to offer at the time.

When Freud came onto the scene, neurology was engaged in a giddy free-for-all. As New Yorker writer Louis Menand points out, the era’s treatments included hypnosis, cocaine, hydrotherapy, female castration, and institutionalization. By contemporary standards, it was a horror show (as evident by these “treatments” featuring so prominently in our horror movies).

Psychoanalysis offered a comparably clement and humane alternative. “Freud’s theories were like a flashlight in a candle factory,” anthropologist Tanya Luhrmann told Menand.

But Freud and his advocates triumph his techniques as a science, and this is wrong. The empirical evidence for his ideas is limited and arbitrary, and his conclusions are unfalsifiable. The theory that explains every possible outcome explains none of them.

With that said, one might consider Freud’s ideas to be a proto-science. As astrology heralded astronomy, and alchemy preceded chemistry, so to did Freud’s psychoanalysis popularize psychology, paving the way for its more rapid development as a scientific discipline. But like astrology and alchemy, we should recognize Freud’s ideas as the historic artifacts they are.

The larger truth on the streets is that no one uses just one drug anymore.
Up Next
Neuropsych

Alan Watts and the art of meditation

Forget everything you think you know about meditation.