A NASA experiment, in 1989, famously showed that indoor plants were effective at removing hazardous compounds from the air. The test, designed to study ways to detoxify the air in spacecrafts, helped perpetuate the idea that houseplants can help purify the air in your home. However, subsequent research has suggested that those benefits are, well, less than significant.

Now, a new gene-editing technique could soon turn houseplants into the effective natural air purifiers they’ve been made out to be. A team of researchers at the University of Washington genetically modified a pothos ivy — a common and robust houseplant, sometimes called devil’s ivy — to remove from the air chloroform and benzene, probable and definite carcinogens, respectively.

The team transferred a synthetic gene into the plants that enabled them to produce a protein called cytochrome P450 2E1, or 2E1, which is present in all mammals, including humans. In humans, this protein converts benzene into a chemical called phenol and chloroform into carbon dioxide and chloride ions. However, it’s only located in the liver so it can’t help us process airborne pollutants.

“We decided we should have this reaction occur outside of the body in a plant, an example of the ‘green liver’ concept,” senior study investigator Stuart Strand, Ph.D., a research professor in the UW’s civil and environmental engineering department, told Genetic Engineering and Biotechnology News. “And 2E1 can be beneficial for the plant, too. Plants use carbon dioxide and chloride ions to make their food, and they use phenol to help make components of their cell walls.”

The researchers placed genetically-modified and unmodified plants in a set of glass tubes, and then added high amounts of either benzene or chloroform gas to each. They then tracked the levels of each compound in the tubes over 11 days. 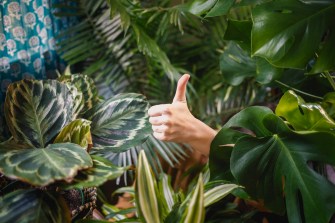 The results suggest environmental science might someday be able to help purify the air in our homes from dangerous pollutants, some of which are too small to be trapped by mechanical air purifiers. Still, there’s a catch: The plants can only effectively remove pollutants if there’s adequate airflow in the room.

“If you had a plant growing in the corner of a room, it will have some effect in that room,” Dr. Strand stated. “But without airflow, it will take a long time for a molecule on the other end of the house to reach the plant.”

The team wants to add another protein to the modified pothos ivy that can absorb formaldehyde, a “probable human carcinogen” found in tobacco smoke and some wood products.

“These are all stable compounds, so it’s really hard to get rid of them,” Dr. Strand said. “Without proteins to break down these molecules, we’d have to use high-energy processes to do it. It’s so much simpler and more sustainable to put these proteins all together in a houseplant.”

Bend it. Stretch it. Use it to conduct electricity.
Strange Maps

A 19th-century surveying mistake kept lumberjacks away from what is now Minnesota’s largest patch of old-growth trees.

The wall vs. legal marijuana: One is pointless, the other secures the border.

A new report shows how legalizing marijuana nationally would likely be much more effective at curbing drug smuggling than building a border wall.