When I noticed articles floating around about the opening of the world’s first psilocybin research center, I figured they were from satire websites. Sure, the case for therapeutic psychedelics is growing: ketamine is the first psychedelic to be legally prescribed for depression in America; MAPS is entering phase 3 trials for MDMA for the treatment of PTSD; iboga and ayahausca are used in addiction treatment in other nations. And, of course, John Hopkins announced the opening of the first psychedelic research center last month.

But a center focused solely on. . . magic mushrooms?

Thank Toronto-based FieldTrip Ventures for that. Ronan Levy is one of the founders. Having cut his teeth in the Canadian medical marijuana business, I was excited to chat with him about this exciting new project (you can hear our full conversation here). The ’60s might have been the golden era of psychedelic experimentation, but we are entering a new phase of clinical research to discover just how effective they are for treating a range of mental health conditions.

Given the results this far, a new era has begun.

Derek: On FieldTrip’s website, it says the mission is “to heal the sick and better the well.” Let’s start with the healing.

Ronan: The evidence suggests that psychedelics, broadly speaking, can help treat a number of mental health conditions, ranging from depression to anxiety to OCD to addiction. There are studies now looking at anorexia and eating disorders as well. Not all of them have been conducted at clinical-trial levels, but there’s definitely been trials on a small scale for all of those conditions. Psilocybin, in particular, has been studied for use in the treatment of depression as well as addiction. I think almost any mental health condition may benefit from psilocybin and other psychedelics. That seems to be where the evidence is leading.

Derek: Their illegality is especially frustrating considering the efficacy rates of SSRIs. What would you say to someone who is thinking about trying psychedelics but is still on other medication?

Ronan: We don’t advocate that anybody attempt to undertake a psychedelic experience on their own. There is evidence to suggest that these molecules can be very effective in the context of psychedelic-assisted psychotherapy. It’s not as well understood outside of that. The effects are unknown in terms of “Will it help?” Many people anecdotally say it absolutely does, but then there’s broader concerns of whether you’re not carefully considering what other medications or supplements you’re using. We would say do it under the context of a medical professional, but presently there are no medical professionals licensed to actually provide psychedelic-assisted psychotherapy. At this point, we don’t advocate that people try this out on their own until it’s better understood.

Derek: Michael Pollan writes extensively about the need for a guide, someone leading you through the experience.

Ronan: That’s where the evidence is and we’ll follow the evidence. That certainly doesn’t mean that it doesn’t merit exploring the potential of psychedelics outside of the context of psychedelic-assisted psychotherapy. However, there’s no evidence on that yet right now, so we remain neutral. 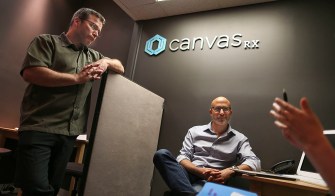 On site are representatives Johnathan Werynski (left) and Ronan Levy from CanvasRX.

Derek: Understood. I appreciate your focus on being evidence-based. I’m also an advocate for cannabis. One thing that has perturbed me has been the CBD explosion, when the efficacy rate in all the studies that I’ve read is4 00 milligrams and above, yet coffee shops sell five milligrams for $8. Do you foresee any dangers of this happening with psychedelics?

Ronan: There is potential danger. They’re powerful molecules. They’re psychoactive and psychotropic. Anytime you’re affecting brain chemistry merits caution and prudence. Do I foresee a future where they’re being added to coffee? Not likely, no. Just like you’re not going to see THC being added to coffee, at least in a legal context. There are risks that bad actors or people really interested in making a buck create products that aren’t necessarily safe, which lead to bad outcomes, which may lead to political backlash. Right now it seems there’s a lot of momentum in favor of psychedelics, and we want to keep that momentum. The best way to do that is to make sure to advance in a very thoughtful way.

Derek: You might be wrong on one of those counts. Here in Los Angeles, the first sanctioned cannabis cafe just opened.

Ronan: That’s fair. I’m not familiar. It seems that the FDA’s stated position is still that CBD is not permitted in any food product. I assume the same applies on the federal perspective on THC. Hopefully, whoever’s opening that cafe is doing it really thoughtfully. No one needs a bad experience.

Derek: Speaking of cannabis, you started your work with Grassfed Ventures. Was cannabis your gateway drug into psychedelics?

Derek: You’re opening the first psilocybin research center in Jamaica at the University of the West Indies, which I find fascinating and important. How did you choose that location? Can you talk about the function of the center?

Ronan: When we became aware of the opportunity around psychedelics in terms of its therapeutic value, we ran into the challenge that anybody looking at the space runs into, which is how to build a business in an illegal industry. We’re not interested in doing anything illegal. As we did our homework, we realized that there are a few jurisdictions around the world in which psilocybin mushrooms are legal. Jamaica is one of those places. Through our work in the cannabis industry, we had great contacts down there. We had very constructive conversations and became aware that there’s openness to it. It made sense to start with Jamaica.

So we are opening the world’s first legal research and cultivation facility focused on psilocybin-producing mushrooms in conjunction with the University of the West Indies. We have the expressed support of various ministers and various levels of government to do this work. The focus of the research facility is to essentially do a lot of the work that’s been done on cannabis over the last 10 years: focus on genetics, strain development, and understand the molecular chemistry of psilocybin mushrooms. We want to understand what other molecules are of interest, which may have therapeutic effects, and isolate them, as well as develop the standards for testing for all of these things. Really, doing anything you think may have been relevant to the development of the cannabis industry.

Derek: Why did you specifically choose mushrooms?

Ronan: The business rationale is that there’s a lot of white space to be studied and lots of IP to be developed. From a societal perspective, the embrace of psilocybin-producing mushrooms is going to be much easier than with the more robust experiences that you have with DMT or ayahuasca. Our hope for the facility in Jamaica is that we will eventually expand into other plant-based psychedelics, but there’s enough work to be done on psilocybin-producing mushrooms, all 200 or so genetic strains. 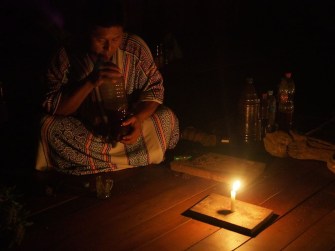 Roger Lopez, Shaman of a Shipibo community in the Amazon jungle, conduct a session of Ayahuasca.

Derek: When you talk about IP and moving into pharmaceuticals, are there any dangers that you foresee anyone being disturbed by that sort of approach to what some people consider sacred medicine?

Ronan: It’s something we’re certainly conscious and aware of. I don’t anticipate it being an issue. Our perspective is we have no interest in diminishing the heritage or sacred beliefs of any culture. But we do believe that a consciously-operated, for-profit entity is the best way to help make the therapeutic value of psychedelic molecules available to the greatest number of people. We’re trying to find the appropriate balance between cultural sensitivity and good business practices.

Derek: I originally discovered mushrooms and other psychedelics in the early nineties. It was in an environment and a community that talked about Terence McKenna and the hero’s dose. In the last few years, microdosing has become very popular. I was skeptical at first, but then came to the conclusion that dosage matters and whatever helps is important.

Ronan: It hasn’t been studied in depth and therefore the effects, whether it’s effective or not, is not well understood. More importantly, if people perceive they’re being helped then they are being helped. Whether it’s the pharmacology involved in the microdosing or just the placebo effect is of less importance in my mind. The bigger concern is that the effects of long-term use of psilocybin at microdosing levels isn’t well understood, so there’s potential health consequences around it. A couple of months ago, the first observational study on microdosing came out and it seems very promising, but I think more research needs to be done.

Derek: Have you envisioned any sort of rollout of training courses that would be developed as the research evolves?

Ronan: Absolutely. With clinical trials going on right now, by and large the protocols that they’re using are very labor- and time-intensive on part of a psychotherapist. It makes sense because they want to achieve the greatest potential results. There’s a lot of work that needs to be done in terms of optimizing delivery of these services and minimize the amount of psychotherapist time that needs to be involved to deliver as good if not better outcomes than currently prescribed by the protocols.

Training people is going to be essential as you scale this, but there’s not a whole lot of evidence on what to base training on outside of what exists in the current clinical trials. You can see really effective training materials and courses coming out because there hasn’t been a lot of experimentation in terms of how the psychotherapy is being delivered. There are protocols that are being used right now similar to the ones that were developed in the fifties and sixties, which haven’t been studied in depth as to whether the amount of psychotherapy work involved is necessary.

You can learn things 250% faster by unlocking your ‘flow state.’
▸
6 min
—
with
Steven Kotler
Up Next
The Present

Why the biggest pledges on emissions are from the smallest countries

In hopes of saving their countries, many small nations are making big promises on cutting emissions.