Scientists at University College London (UCL) and the IIT (Istituto Italiano di Tecnologia) have created a temporary tattoo that contains the same light-emitting technology used in TVs and smartphone screens.

The technology uses organic light-emitting diodes (OLEDs) and is applied in the same way as simple water-transfer tattoos. The OLEDs are fabricated onto a temporary tattoo paper and then transferred to a new surface by being pressed onto it and dabbed with water.

According to the research, these OLED devices being developed are 2.3 micrometers thick in total (less than one 400th of a millimeter) and about one-third of the length of a single red blood cell. The device consists of an electroluminescent polymer (a polymer that emits light when an electric field is applied) that is placed in between electrodes. An insulating layer is then placed in between the electrodes and the commercial tattoo paper.

This process has already been successfully applied to various materials.

Once the research team had perfected the technology, they applied the tattoo-able OLEDs (which emit green light) onto various surfaces including a pane of glass, a plastic bottle, an orange, and paper packaging. The first OLEDs were used in a flatscreen television more than 20 years ago, and now, through this proof-of-concept study, “smart tattoos” may be a thing of the (very near) future. 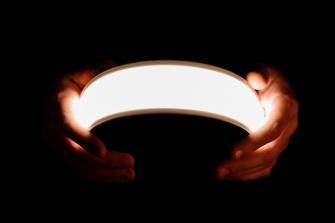 It’s not just about looks—this approach provides a quick and easy method of transferring OLEDs onto practically any surface.

OLEDs are used to create digital displays in devices (such as television screens computer monitors, smartphones, etc). While some may get OLED and LED confused, they are quite different, with OLED displays emitting visible light and therefore being able to be used without a backlight. The breakthrough process of being able to transfer OLEDs onto virtually any surface can be useful in many different applications and settings.

Light-emitting tattoos could be used to indicate (and potentially even treat) various health conditions in the future.

The eventual implementation or use of OLED tattoos could be combined with other tattoo electronics to, for instance, emit light when an athlete is dehydrated, or when a person is being exposed to too much sun and is prone to sunburn.

“In healthcare, they could emit light when there is a change in a patient’s condition – or, if the tattoo was turned the other way into the skin, they could potentially be combined with light-sensitive therapies to target cancer cells, for instance.” – Professor Franco Cacialli (UCL) 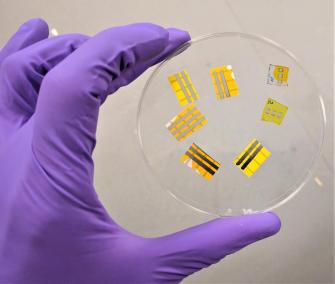 Similarly, this technology could be used on the packaging of various items to give us more information about them.

For example, OLEDs could be tattooed onto the packaging of a fruit to signal when the product is passed its expiration date or will soon become inedible.

In reality, creating light-emitting tattoo technology doesn’t have to be expensive.

Professor Franco Cacialli explains to Eurekalert: “The tattooable OLEDs that we have demonstrated for the first time can be made at scale and very cheaply. They can be combined with other forms of tattoo electronics for a very wide range of possible uses. These could be for fashion – for instance, providing glowing tattoos and light-emitting fingernails. In sports, they could be combined with a sweat sensor to signal dehydration.”

“Our proof-of-concept study is the first step. Future challenges will include encapsulating the OLEDs as much as possible to stop them from degrading quickly through contact with air, as well as integrating the device with a battery or supercapacitor.”

Tags
biotechdatadesignhealthhealth carehuman bodymachine learningmedicineproduct designprostheticssportstechnologyThe Future
In this article
biotechdatadesignhealthhealth carehuman bodymachine learningmedicineproduct designprostheticssportstechnologyThe Future
Related
Health
How saliva changes the flavor of food
“It’s a liquid, but it’s not just a liquid.”
Neuropsych
Asthma drug brings back “lost” memories
In a study involving mice, scientists used two different techniques — one optogenetic and one pharmacologic — to recover “lost” memories.
Life
Our antidepressant drugs are affecting animals and ecosystems
A toxicologist explains the impacts of antidepressants on fish — and no, they’re not getting any happier.
Health
New blood types are often discovered following medical disasters
New blood types are regularly discovered by an unusual absence or an unusual presence — both of which can result in tragedy.
Life
Scientists use CRISPR to insert an alligator gene into a catfish
Disease kills off 40% of farmed catfish. This gene protects them.
Up Next
Health
Become a master mixologist with this $30 course
Learn to whip up some of the most popular cocktails — from classic mojitos to white chocolate and coconut martinis.