It was just a small study from a team of researchers led by gastroenterologist Philipp Schwabl of the Medical University of Vienna, but all eight people selected as subjects in the warm-up experiment for further research were found to have microplastics in their stools. Schwabl tellsThe New York Times, “This is the first study of its kind, so we did a pilot trial to see if there are any microplastics detectable at all. The results were astonishing.” Making this even more surprising is that subjects were from a range of places: Austria, Finland, Italy, Japan, the Netherlands, Poland, Russia, and the UK.

Scientists have been concerned for some time about plastics making their way into our bodies from various sources, and this small study is the first to find significant amounts of the stuff. “Of particular concern is what this means to us, and especially patients with gastrointestinal diseases,” Schwabl tellsCNN. “While the highest plastic concentrations in animal studies have been found in the gut, the smallest microplastic particles are capable of entering the blood stream, lymphatic system and may even reach the liver.”

The findings were presented at a gastroenterology gathering in Vienna. 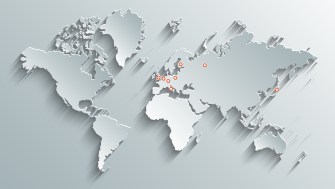 Microplastics are bits of plastic smaller than five millimeters. In the participants, the pieces ranged in size from 50 to 500 micrometers. On average, subjects were carrying 20 particles of microplastic per 10 grams of stool. There were bits of polypropylene (PP) and polyethylene terephthalate (PET) in everyone. The researchers tested the stools for 11 different kinds of microplastics, finding as many as 9 in a subject. 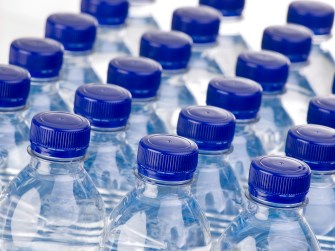 Where are the microplastics coming from?

We’ve written previously about research that points to seafood from plastic-polluted oceans as a potential source of microplastics in humans, though in this study, only six of the eight participants had eaten seafood. What they all had in common, however, was that all eight had eaten plastic-packaged food and they’d each consumed an average of 750 milliliters of water from plastic bottles during the week—they subjects kept food diaries, as required for the trial. PP and PET come from plastic bottles and caps.

Since this research involved such a small sample—it wasn’t even really intended as a full study, after all—it serves primarily as a warning that more investigation is needed. There are a number of questions the study raises but doesn’t answer. Do microplastics remain in the body, or do they just pass through? Are these microplastics from plastic bottles, food, or somewhere else, such as the household environment in which they may be found in dust, or coming from sources such as nylon fibers in our dryers? But with an estimated 150 million tons of plastic floating around our oceans alone—and uncounted particles everywhere else—clearly we need to know much more about the travels of these chemical bits and their effect on living organisms like us.

Tags
environmenthealthhuman bodymedical researchplasticpollutionpublic healthwater
In this article
environmenthealthhuman bodymedical researchplasticpollutionpublic healthwater
Related
Health
New blood types are often discovered following medical disasters
New blood types are regularly discovered by an unusual absence or an unusual presence — both of which can result in tragedy.
Neuropsych
How you breathe affects your brain
Your breathing rhythm influences a wide range of behaviors, cognition, and emotion.
Hard Science
200 years of exploring Antarctica
What we’ve learning from the world’s coldest, most forbidding, and most peaceful continent.
Health
COVID, RSV and the flu: A case of viral interference?
Viruses, it turns out, can block one another and take turns to dominate.
Neuropsych
Shopping with your nose: How body odors influence your buying behavior
Sniffing out a deal.
Up Next
The Present
Short seller changes mind: ‘Tesla is destroying the competition’
For more than two years, Andrew Left of Citron Research has been one of the most vocal Tesla skeptics.