Remember Frank Sinatra’s swagger, John Wayne’s quiet confidence, and Burt Reynold’s impressive mustache? They were icons of masculinity for a lot of people, and many folks today point to those icons when bemoaning a perceived loss of masculinity in our society.

Well, Frank Sinatra had a violent temper, John Wayne was a racist, Burt Reynolds was a womanizer, and they all drank way too much. Our values have changed more than the storied qualities of “manliness.” Despite this, there is something to the argument that men used to be more manly back in the day.

A study on a large sample of American men found that the average testosterone level has been dropping by as much as 1 percent per year. Testosterone levels lower naturally with age, but this study found that a 65-year-old man in 1987 had about 17 percent more testosterone than a 65- year-old man in 2004. This wasn’t just limited to Americans either; a Danish study found similar results. Anecdotally, sex counselor Ian Kerner told CNN that he’s noticed “an increasing number of young guys are complaining of sexual concerns, such as diminished libido and erectile problems, more commonly seen in older men.” 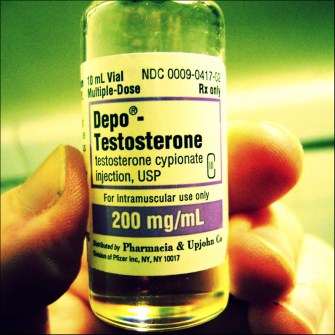 As testosterone levels decrease with age or in response to medical conditions, some people choose to receive testosterone therapy and inject what their body fails to produce.

It’s not a disaster. Most men today still have perfectly healthy levels of testosterone even if it is dropping year to year. But if testosterone levels get too low, then we start to see a slew of bad effects.

Testosterone promotes attention, memory, spatial reasoning, and energy — essentially, it makes you sharper — and, of course, it increases libido and muscle mass. When Testosterone counts get too low, men can begin to feel fatigued, lose sexual interest, gain weight, and lose muscle mass. In addition, there is a link between low testosterone levels and depression.

There’s also a wide association between low testosterone levels and disease. One study, published in the spring, found that people with a testosterone deficiency (defined as less than 300 nanograms of testosterone per deciliter) were at greater risk for obesity, cardiovascular disease, hypertension, diabetes, and other diseases. It’s important to note that this is correlational data; it’s very difficult to definitively prove that low testosterone causes these negative outcomes. But the odds are that doing the activities that keep your testosterone levels up will also help prevent these very undesirable conditions. 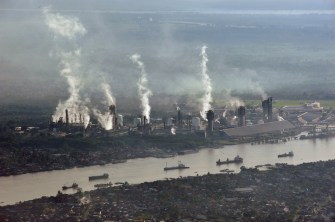 Industrial pollutants have a myriad of negative effects on our health, one of which can is the blocking of testosterone in the body.

Unfortunately, the reason why testosterone counts keep dropping over the years isn’t clear, but there are some likely candidates. One surprising possibility is that people smoke fewer cigarettes now. Even though everything else it does is terrible for you, smoking actually raises testosterone levels. And back in Frank Sinatra’s day, smoking was the norm, not the exception. But please, don’t light up to make yourself manlier. It’s a bad idea.

Our rising rates of obesity, too, are probably contributing. Between 1999 and 2016, obesity in American adults increased by nearly 10 percent. Obesity and testosterone create something of a vicious cycle: obese men tend to have lower testosterone , and men with lower testosterone tend to become obese. This happens because fat cells metabolize testosterone and convert it into estrogen. In addition, obese people have lower levels of SHBG (sex hormone binding globulin), which transports sex hormones like testosterone through the blood.

However, the most likely candidate is pollution. Research has shown that chemicals that are commonly found in medicine and pesticides inhibit testosterone. These chemicals are seeping into our water, contributing to fertility problems in fish. The researchers also speculate that this same mechanism is occurring in humans as well.

In addition, research on Native American tribes found that higher levels of polychlorinated biphenyls (PCBs; a component in industrial coolants, as a plasticizer, and in many other applications) in the males’ systems was associated with lower testosterone counts. We’ve known that PCBs are toxic for years, but the chemical lasts for a very long time. Other chemicals, like bisphenol A (BPA; a plastic) and triclosan (an antibacterial agent) have been shown to disrupt the human hormone system, either by mimicking estrogen or blocking the activity of testosterone. Once chemicals such as these get into the environment and enter the food chain, they are very difficult to remove.

Good news: The things that are lowering men’s testosterone levels may be complicated, but combating this issue is simple and probably what you would have guessed anyways. Eat a healthy diet, exercise more, and get a good night’s sleep. If you really want to go the extra mile, avoid eating or drinking from plastic containers. Finally, get political: When environmental regulation goes out the window, so too does your health. Contrary to the stereotype, becoming a treehugger might be the best way to save your masculinity.

The human brain makes a striking deviation from the normal building plan.
Up Next
Life

Doctors in Scotland can now prescribe nature to their patients