Alibaba co-founder, Jack Ma, came under fire in April when calling a 12-hour a day, six-day workweek a “blessing.” He defended his statement by claiming China’s booming economy is the result of booting out “slackers,” yet the sentiment reeked of modern indentured servitude. China’s labor laws aren’t exactly known for being worker-centric.

Ma’s bottom line as a billionaire might rely on such a dedicated workforce, but a new study from researchers at the universities of Cambridge and Salford proposes a new model for keeping workers happy: Not twelve hours a day — not even twelve a week. The magic number seems to be eight.

An eight-hour workweek rebuts every capitalistic narrative we’ve been taught. The forty-hour workweek, recall, is an 80-year-old construction, not a social necessity for the functioning of society.

When the U.S. government started tracking working hours in 1890, the average manufacturing employee was clocking in 100 hours per week, even though legislation had been introduced as early as 1866 to cut it back to eight hours per day. Child labor laws, introduced in 1938, also forced employers to reassess what they could do to their workforce. There has never been a perfect working environment; the powerful have always exploited workers by whatever means possible.

In the current “gig economy,” working hours are sporadic and often uncertain for a portion of the population. Workweeks often comprise 40, 60, even 80 hours spread across multiple employers. Media discussing the shift from full-time employment to contracting tends to focus on employee pay and corporate governance. Little regarding the mental health of workers has been entertained.

The basis of the study is Andrew Yang-esque: rapid advancements in AI, VR, and AR are changing the nature of work and employment opportunities in the very near future. One caveat about this study: for mental health perks to emerge from so few hours, the playing field would have to be leveled to the point where most employees partake. In this light, the findings rely on a lot of speculation that would require a total rethinking of “work.”

A sad fact persists even in the midst of such speculation: we might not have a choice. The team first looked at how changes in work time affected 71,113 workers (out of an initial pool of over 156,000). They studied the mental wellbeing of employees working between one hour and 48 hours per week. A baseline for maintaining a sense of purpose and mental stability occurred around eight hours. Notably, benefits did not increase (or decrease) with more work. Full-time employment did not bestow extra benefits.

When workers reentered the workforce — after a bout of unemployment or raising a child — mental heath issues were reduced by 30 percent from just one day of paid labor. The study’s co-author, Cambridge sociologist Dr. Brendan Burchell, who also leads the Employment Dosage research project, focuses on the shifting nature of employment. He notes:

“We know unemployment is often detrimental to people’s wellbeing, negatively affecting identity, status, time use, and sense of collective purpose. We now have some idea of just how much paid work is needed to get the psychosocial benefits of employment — and it’s not that much at all.”

Plenty of previous research has shown that work offers a sense of purpose. Yet so can family, social circles, pets—the list is not reduced to occupation alone. Work is one aspect of group cohesion; an important one, but perhaps not the one that needs to dominate our lives.

Anthropological research has shown that just a couple hours of hours of work per day were likely enough for hunter-gatherer tribes to function. Obviously, this type of work (building and maintaining shelter, hunting, agriculture) is vastly different than careers in individualist societies, where “getting ahead” is the primary focus and social cohesion is an archaic throwback. In this sense, society has truly thwarted biology. 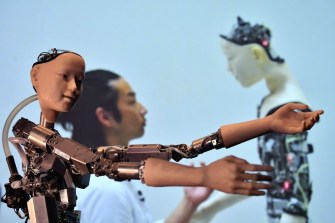 An A.I. robot with a humanistic face, entitled Alter 3: Offloaded Agency, is pictured during a photocall to promote the forthcoming exhibition entitled “AI: More than Human”, at the Barbican Centre in London on May 15, 2019. Photo credit: Ben Stansall / AFP / Getty Images

The world we’re entering, ruled by automation thanks to big data and robotics, is going to change our sense of shared values. Salford’s Dr. Daiga Kamerāde, the study’s first author, says we need to completely reorient the workforce if we care about the sanity of employees:

“If there is not enough for everybody who wants to work full-time, we will have to rethink current norms. This should include the redistribution of working hours, so everyone can get the mental health benefits of a job, even if that means we all work much shorter weeks.”

Further benefits include carbon emission reduction (less commuting), improved work-life balance, and increased productivity. Again, this model would force societies to confront the redistribution of wealth. What academics perceive as reasonable on paper will likely manifest as Steinbeckian, workers smothering fellow citizens racing to the front of the employment line (or Amazon factory caravans growing in size).

The research team set out with two clear goals: discover the minimum number of working hours per week to satisfy mental wellbeing requirements and the optimum number of hours for peak mental health. On both counts, that number is much smaller than popularly advertised, particularly by a certain Chinese billionaire.

Of course, some work is better than none. That too is clear from this research. While robots and A.I. are on the tip of everyone’s mind, we’re soon going to have to grapple with one of the greatest challenges in human history: reorienting society to deal with the ravages of climate change. It will certainly give us a renewed sense of purpose, but what that means for the future of “work” remains to be seen. Best to start to prepare now.

Is This The Most Massive Star In The Universe?

The largest group of newborn stars in our Local Group of galaxies, cluster R136, contains the most massive stars we’ve ever discovered: over 250 times the mass of our Sun […]