Many of us have that friend—the one who runs marathons. Their car is plastered with bumper stickers: 13.1, 26.2, “I’d rather be running.” Half of the photos on their Tinder profile is of them smiling in the rain with a marathon number affixed to their Lycra shirt. They use their cardiovascular health as a club to bludgeon us undisciplined folks.

If you know somebody like that, you may find it satisfying to know that there is a marathon out there where bragging is very much frowned upon. It’s the kaihōgyō, and its difficulty is enough to put even the most ardent ultra-marathoner to shame. The marathon can only be carried out by Buddhists monks belonging to Japan’s Tendai sect of Buddhism, and it takes 1,000 days spread out over seven years to complete. Instead of bragging rights, the monks who complete what is likely the most difficult marathon in the world are said to receive a better understanding of the universe.

The Seven Year Pilgrimage to Enlightenment

The kaihōgyō takes place on Mount Hei, which overlooks the ancient capital of Japan, Kyoto. The grueling, 1,000-day marathon is carried out over the course of seven years, with a different regimen each year.

For the first year, a monk must run 30 km each day for 100 consecutive days. On top of this, they must still perform their regular temple duties, leaving very little time for sleep. Endo Mitsunaga, the most recent monk to complete the challenge, would wake up at a bit after midnight, lace up the straw sandals he was required to wear, and run up and down the mountain, stopping to pray at about 260 different shrines along the way. At 8 a.m., he would return and perform his duties at the temple. Each night, he slept about 4 and half hours.

As Mitsunaga ran throughout the mountain, he would also pass by a number of unmarked graves. These, along with the knife at his side, were reminders of the seriousness of kaihōgyō. At the end of the first year — the first 100 days — a monk is permitted to withdraw from the challenge. If, however, they decide to embark on the 101st day of the marathon, they are no longer permitted to stop. If they fail, tradition demands that they take their own lives. Mount Hei is littered with the graves of monks who failed to meet the challenge; none, however, date from the later than the 19th century.

If the monk chooses to continue, the next two years go on much like the first: 30 km per day for 100 consecutive days, praying at shrines throughout the mountain, and taking care of their duties at the temple. Then, for the fourth and fifth year, the monk must run 30 km per day for 200 consecutive days. Here, a little bit after the midpoint, comes perhaps the most difficult aspect of this practice. 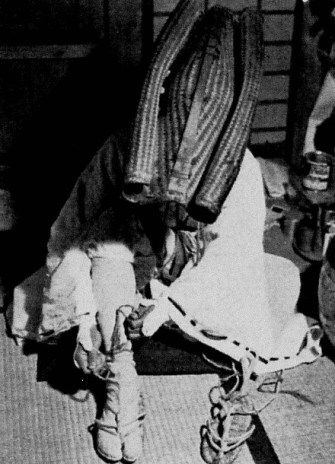 A Tendai monk wearing the traditional kaihōgyō garb. Notice the thin sandals the monks are required to wear during their seven-year marathon.

After completing the fifth year of the marathon, the monk must perform the dōiri, a grueling nine-day ritual. Fortunately, it doesn’t involve running. Instead, it’s a light and breezy nine-day period forgoing food, water, and sleep. The monk must sit in a temple at Mount Hei and recite a mantra nonstop. To make sure the aspiring monk doesn’t fall asleep, two other monks watch him.

Keep in mind that the longest anybody has ever gone without sleep is about 11 days. As if this wasn’t enough, the monk must also go fetch water from a well 200 m away at 2 a.m. each night, not to drink, but to offer up to a statue of the Buddha Fudō Myōō.

If the monk manages to pass this ordeal, then they can begin the sixth year of kaihōgyō. For 100 consecutive days, the monk must run 60 km. In the seventh and final year, the monk must run 84 km everyday for the first 100 days, and then the practice winds down to just 30 km a day for the rest of the year. By the end of the seven years, the monk has run about a distance that equals the circumference of the Earth.

The insane mental and physical commitment that it takes to completekaihōgyō puts it squarely among the most challenging tasks in the world. In fact, it’s so challenging, that only 46 monks have completed the challenge since 1885.

The enormity of the task begs the question: why? You don’t even get a bumper sticker at the end of it.

Most runners train for their marathons, but with kaihōgyō, this principle is inverted — the marathon itself is instead training for the monk in order to attain enlightenment. The demanding physical and mental tasks associated with kaihōgyō are meant to instill an understanding of the body’s and self’s transient, empty nature.

During the nine-day period of dōiri in the middle of kaihōgyō, the monk symbolically dies (and comes pretty darn close to death anyhow). After emerging from this state of pseudo-death, they are reborn, a clean slate with a new understanding of the temporary nature of life and the self. Ultimately, the goal of kaihōgyō is to train monks in how to lead others into enlightenment as well.

Tags
asiabuddhismdeathhuman bodyreligionsports
In this article
asiabuddhismdeathhuman bodyreligionsports
Related
Health
How saliva changes the flavor of food
“It’s a liquid, but it’s not just a liquid.”
High Culture
Why are flood myths so common in stories from ancient cultures around the world?
Could the prevalence of flood myths around the world tell us something about early human migration or even the way our brains work?
The Future
Space travel will radically change human psychology and spirituality
We are traveling in a realm that once exclusively belonged to the gods. Space travel will force humanity to rethink everything.
The Past
How the death of alchemy gave birth to modern science
Far from practicing witchcraft, the experimentation of medieval alchemists helped bring about the Scientific Revolution.
Thinking
Finding your essential self: the ancient philosophy of Zhuangzi explained
Adopting a healthy scepticism towards inherited ideas means “emptying the container of the Self.”
Up Next
Health
Brain activity pattern may be early sign of schizophrenia
In a study that might enable earlier diagnosis, neuroscientists find abnormal brain connections that can predict onset of psychotic episodes.